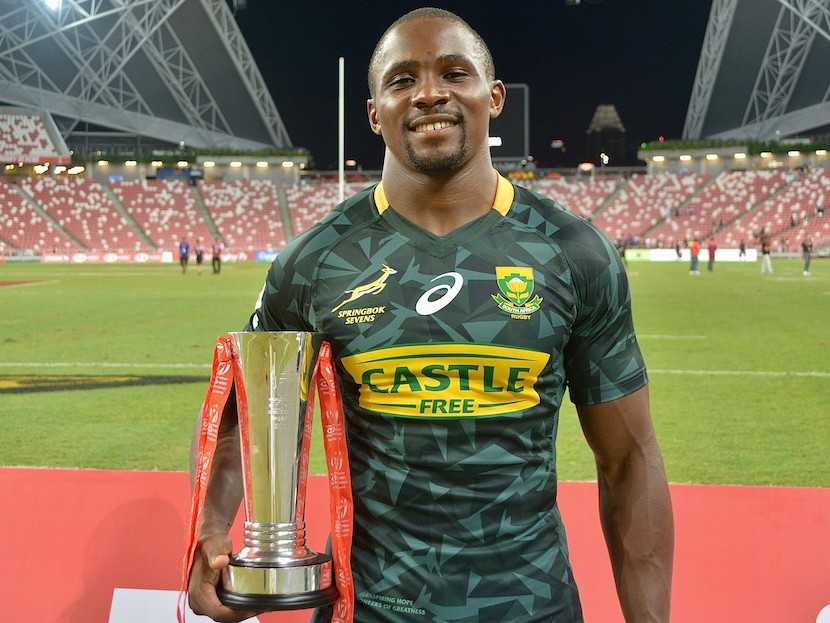 JOHANNESBURG — Once again the old sports journalism cliché of a match being “a game of two halves” rang true as South Africa fought back in a dramatic final to beat Fiji at the Singapore Sevens. This season the Blitzboks have been consistent in their inconsistency – terrible in Las Vegas and superb a week later to win in Vancouver, terrible in Hong Kong and superb a week later to win in Singapore. As a result of their second tournament win of the season, the Blitzboks retain their 4th position on the overall standings, but have stretched the gap between themselves and 5th-placed England (who got the bronze medal in Singapore) to 14 points as the fight for a top 4 position and automatic qualification for next year’s Olympics heats up. With only two tournaments left in the season (London and Paris), there is still a mathematical chance of South Africa retaining their World Sevens Series title, but that would depend on complete (and unlikely) meltdowns by USA, Fiji and New Zealand. Realistically, the Blitzboks could eye a 3rd place finish as they are just 9 points behind the Kiwis on the overall standings. Coach Neil Powell is justifiably proud of the younger, less experienced players in his side who performed like seasoned veterans. Kurt-Lee Arendse, Angelo Davids, Ryan Oosthuizen, Impi Visser and Selvyn Davids are at the start of their careers. If they continue playing like this, they are destined to become legends of the sport in the years to come. The Sevens now moves to Twickenham on 25/26 May. – David O’Sullivan

The Springbok Sevens staged an amazing comeback in the final of the HSBC Singapore Sevens to beat Fiji 20-19 on Sunday.

South Africa were down 19-0 at the break, following three first half tries by Fiji, but stunned their opponents in the second half at the Singapore National Stadium.

The Blitzboks scored three tries, by Kurt-Lee Arendse, Angelo Davids and Ryan Oosthuizen, with one converted, which brought them within two points with a minute to play. A penalty awarded near the Fijian posts gave Selvyn Davids the opportunity to kick a penalty goal, which gave South Africa a 20-19 lead.

One more play followed, but the defence held out and gave the Blitzboks their second tournament win in the HSBC World Rugby Sevens Series in the 2018/19 season. They also won in Vancouver last month.

Springbok Sevens coach Neil Powell was full of praise for his squad, who started the final without their injured captain, Siviwe Soyizwapi.

“It was a gutsy performance,” said Powell.

“They really never gave up. We spoke at halftime about the importance of scoring first after the break and that happened and the guys kept on playing.

“It was important that we held onto the ball in that second half. The young players are really coachable and listened to all the advice and instructions and it worked out for us in the end. They did score first, although only after two minutes, but that gave the belief the needed momentum. I am almost speechless on how they pulled this one back.”

Will go down as the greatest HSBC7’s Final to date! Well done @Blitzboks #Singapore7s pic.twitter.com/yMHsT7bong

Powell said his team struggled in the first halves of their matches at the tournament, but played very well after the break: “We were often our own worst enemies, but once we got things going, we really played well.”

The disappointment of finishing seventh in Hong Kong is now behind them.

“It was tough this week, the guys were down after the disappointing show there. Their comeback makes me very proud,” said Powell, who also praised his management.

“We needed to make sure the guys had energy this weekend and changed our approach to achieve that. It worked well and I need to compliment the management for their roles in getting the guys ready to go again.”

Soyizwapi, who missed the final due to a knee injury, said it was hard to describe the emotions after their amazing comeback.

“They guys kept on believing in our structure and by doing so, their natural abilities came to the fore. They expressed themselves. I kept believing, this is what we were working for. It was incredible,” said Soyizwapi, who also praised the younger players in the squad.

“The newer guys learned so much, but they also gave so much effort. We will all be better because of this experience.”

Well done Blitzbokke. Can't say the same for DSTV for cutting off the presentation ceremony. #Singapore7s

Not only did the Blitzboks claim a second tournament title in the 2018/19 HSBC World Rugby Sevens Series, they also improved their standing on the overall log.

The win extended their lead over England to 14 points. South Africa remain fourth on the log, with England in fifth sport. The top four sides automatically qualify for the Rugby Sevens event at the Olympic Games in Japan in 2020.

Earlier on Sunday, the Springbok Sevens team outplayed USA 24-12 in the semi-finals and edged Samoa 21-12 in the Cup quarterfinals.

Against the USA, the Blitzboks were off the mark quickly with Soyizwapi – the all-time leading try-scorer in Singapore – dotting down in the first minute. Branco du Preez converted from a tight angle to put South Africa 7-0 up.

Play then moved from one side of the field to the other, as both sides attacked strongly without success. A long, patient build-up by the Blitzboks got Stedman Gans over the line, just before the break for a 12-0 lead.

Who was the bright spark at @SuperSportTV that thought it was a good idea to unceremoniously cut the footage of the trophy ceremony of #Singapore7s ?? 🤬 We are not amused!! @BlitzBokke won!

The USA were first on the board in the second half when Steve Tomasin scored, but from the restart, Impi Visser, ran 50 meters to score and extend the lead to 17-5.

Tomasin then turned villain as he slapped down a potential scoring pass of South Africa and a penalty try was awarded. The 24-5 lead was too big to overhaul, although Joe Schroeder pulled one back.

In their first match on the second day, the Blitzboks edged Samoa 21-12 in the quarter-finals.

The Blitzboks had to recover from being 12-0 down to secure the win, with a strong second half showing getting them the win.

Samoa scored early following a yellow card to Werner Kok and got a second, after sloppy breakdown play by South Africa handed Samoa the ball.

Impi Visser pulled one back just before the break and the conversion cut the lead by seven points, 7-12. The second half saw two more converted tries by South Africa. Justin Geduld scored first, before Selvyn Davids chipped ahead and beat the Samoan defence to the ball.

The overall standings after the Singapore Sevens: