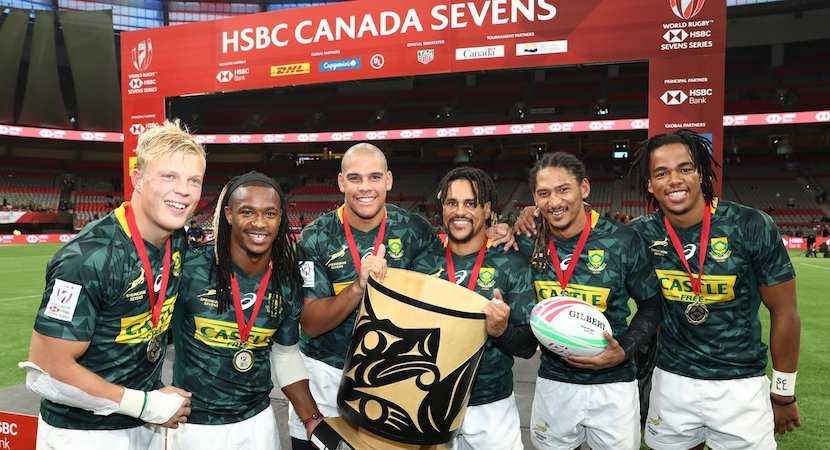 JOHANNESBURG — The Blitzbok victory in Vancouver in the 6th tournament of the 2018/19 season was huge, even for a team that has, over the past two years, made winning a habit rather than an exception. After battling to find the form that won them back-to-back World Sevens Series titles in the past two seasons the first victory of the current season comes as an enormous relief. Very few would have given the South Africans much of a chance of emerging victorious in the Canadian leg of the competition following one of their worst performances in over three years in Las Vegas where they finished 7th overall. Coach Neil Powell’s faith in his younger players has not waivered and his decision to throw a relative newcomer like Selvyn Davids into the deep end in the final was justified. Davids is a star in the making, showing a mix of calmness under pressure and superb all-round footballing skills, using techniques better suited to a soccer player than a rugby sevens player in a tight situation. It’s unlikely the Boks will win the 2018/19 competition as there are only four tournaments left and they are in 4th place on the overall standings, 12 points behind their nearest rivals Fiji and 24 points adrift of the unlikely log leaders USA. – David O’Sullivan

There were tears of joy and broad smiles, as well as a sense of relief in the Springbok Sevens camp following their tournament win in Canada this weekend, which came just at the right time for the Blitzboks to gain momentum for the rest of the HSBC World Rugby Sevens Series.

Siviwe Soyizwapi, who had the honour of captaining the Blitzboks in their final two matches of the HSBC Canada Sevens in BC Place on Sunday after Philip Snyman was ruled out due to injury, said they felt a lot of mixed emotions in Vancouver.

“We needed this victory,” said Soyizwapi.

“We are rebuilding the squad and it was such a relief for us to get back to winning ways. This win was building and building, and it was just reward for the hard work.

“This win was very emotional for us as we worked so hard the last couple of weeks. We have smiles on the faces now as the massive efforts got reward. It was a perfect weekend where so many things came together for us, guys trusting and backing each other, all buying to the game plan and the squad working as brothers.”

Soyizwapi was “super happy” with the victory, but also the way the team delivered on Sunday: “We trained hard to play a certain way and it came off, the guys played like we know we can. This is a great result for us going forward.”

Another Blitzbok stalwart, Werner Kok, said the win was not only important for the team.

“This is for everyone involved with the team as well, including our supporters – we almost took winning for granted and this is such a nice feeling to win again,” said Kok, who also praised the role of the SA Rugby Sevens Academy, with the likes of Impi Visser, JC Pretorius, Sako Makata and Kurt-Lee Arendse all graduating into Blitzboks this year.

“The guys in the Academy work just as hard as us. They keep competition as healthy as it could be and this win belongs to them too.

“It is important for the next group of players to take the flag and run with it. Nothing lasts forever and we must use every opportunity to play for this team and our country. You must be prepared to make sacrifices for this team and the guys showed that this weekend.”

Kok endorsed the younger players: “They did well and grabbed the opportunity. Look at Stedman Gans, he was given the starting role and he was phenomenal.”

The Springbok Sevens will always come first for Selvyn Davids and although he was named the HSBC Canada Sevens Player of the Final, the diminutive speedster said it was all part of the team effort.

The scrumhalf/sweeper revelled in his promotion to the starting line-up. Davids tackled and clocked running meters like no other, while crucial tries against Fiji and France and a trusted left foot that delivered 17 conversions – more often than not from the tightest of angles – made him the top scorer at the tournament.

🤭 There’s an obscene amount of skill in this @Blitzboks try. How good is Selvyn Davids? #Canada7s pic.twitter.com/myLTpVtovF

But Davids also moved into the digital age this weekend when the Blitzboks played Wales on Saturday. Early in the match, Davids was surrounded by four defenders when he used his soccer skills to keep the ball in play in a move that resulted in a South African try.

Videos of a sublime tackle on Fijian flyer Aminiasi Tuimaba in the semifinal and the soccer kick against the Welsh trended on Twitter, with the latter even getting football clubs in South Africa joining in by inviting Davids to training when back home.

To be named top player twice in 11 outings in the highly competitive HSBC World Rugby Sevens Series is not something to be sniffed at, but for Davids, who walked away with the same accolade in Hong Kong just under a year ago, it was never about him.

“I did not expect to be named Player of the Final, but this award is as much the team’s as it is mine,” he said.

“Without them, I would be nothing. We play for each other that is what the team stands for. Remember, when you put that jersey on, it is not about you anymore. It is about the team and those that the jersey represents.”

Davids admitted some nerves and emotion as they contested the first final he was involved in: “This was my first final, so it was very emotional, but I knew I had my team mates backing me and I had trust in them.”

Davids only earned his starting berth this weekend in Vancouver, with Blitzbok coach Neil Powell previously opting for the vastly experienced Branco du Preez to start in the scrumhalf/sweeper position. Powell also had Rosko Specman in that position as well for the opening two tournaments of the series, so playing opportunities was limited for the Eastern Cape man.

“Branco has been a stalwart in the team and I learned so much from him and Rosko as well as Cecil Afrika in the last couple of seasons,” said Davids.

“Even when Coach Neil said that I was going to start, Branco still supported me. I want to thank both for that support. I am just happy that I took my chance and did justice to the confidence Coach had in me.”

For Davids, who made his debut in Hong Kong in 2017 when he replaced an injured Specman, the often-spoken about processes and structures in the Blitzboks team make perfect sense.

“We have a ‘small box, big box’ system in the team. The big box is the game plan and the structures and processes we follow, the small box is the players and how we express ourselves inside that bigger box. We did that very well this weekend,” he explained.