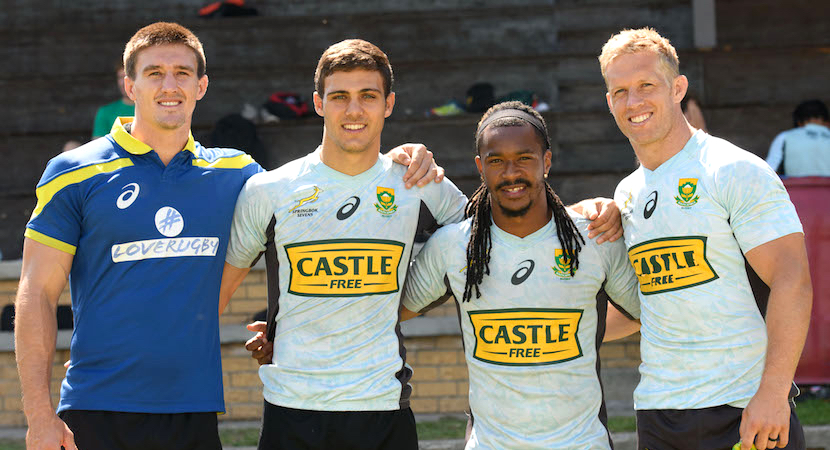 JOHANNESBURG — When Branco du Preez made his debut for the South African Sevens side in Wellington in 2010 at the age of 20, three months shy of his 21st birthday, it was clear that, barring injury or being lured away to the 15-man game, he would be one of the country’s record-breakers. Now, nine years later, he’s chipping away at the milestones. He already owns the record for most conversions (398) and most games for the Blitzboks (350, having earlier overtaken Kyle Brown’s record of 347). Next weekend, he competes in his 70th tournament at the London Sevens, overtaking Kyle Brown to hold the record for most tournaments for South Africa on his own. He needs 178 more points to break Cecil Afrika’s record for the highest number of points scored for the Blitzboks. It’s surely just a matter of time before he claims that record as well. – David O’Sullivan

Branco du Preez will become the most-capped Springbok Sevens player of all time at the HSBC London Sevens next weekend when he runs out for his 70th tournament for the Blitzboks in the penultimate tournament of the HSBC World Rugby Sevens Series at Twickenham.

Du Preez currently shares the mark of 69 tournaments with Kyle Brown, but he will become the sole record holder in London after being named in the squad by Blitzbok coach Neil Powell. The HSBC Paris Sevens will complete the 2018/19 season a week later.

The Springbok Sevens coach recalled two previously injured players, JC Pretorius and Muller du Plessis, to the squad, which will again be led by Siviwe Soyizwapi, in the only changes to the side that won the HSBC Singapore Sevens in April.

Du Plessis and Pretorius last played at the HSBC Canada Sevens in Vancouver, where the latter was named in the tournament Dream Team.

Pretorius takes over from Chris Dry and Du Plessis from Angelo Davids, who has been included in the Junior Springbok squad. Regular captain, Philip Snyman, will travel to London and Paris as 13th player.

Powell said naming the final squad was a difficult task.

“We had a full squad to select from for a change, with a whole lot of players coming back from injury and available for selection. The fact that the squad won in Singapore was also a factor, as we wanted to reward those players as well,” Powell explained.

“One of our objectives for the year was to expand our depth with younger players, many of whom have now forced their way into the team. It is an exciting squad and with qualification to the 2020 Olympic Games a strong possibility, there is real motivation to finish the season well.”

Powell congratulated Du Preez on his achievement: “Branco will be the first to tell you that it is not about accolades, but about contributing to the team, so it is pleasing that he can claim a personal milestone such as this one. He is one of the best examples of what this team stands for and this is just reward for a very humble person.”

The Blitzboks will face Japan, Canada and Argentina in Pool A at Twickenham on Saturday 25 May.

Most capped Blitzboks in the World Series: