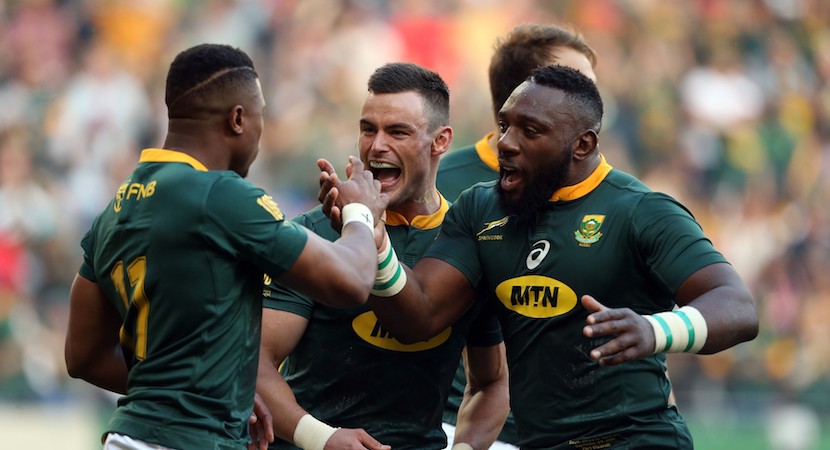 A terse statement from SA Rugby confirms a young rugby player’s career is in tatters. Aphiwe Dyantyi was the rising star after winning the Breakthrough Player of the Year at last year’s World Rugby Awards. He had scored 6 tries in his first 8 Tests for South Africa including two in the famous win against the All Blacks in Wellington. He played in 13 Tests in his debut season, but missed out on international honours this year through injury. He strained a hamstring at a Bok training camp in July and missed the Rugby Championship campaign. He was expected to have returned to full fitness by early September, but coach Rassie Erasmus was clear that the Lions winger wasn’t considered for the World Cup squad because, as he put it, “you can’t just rock up to the World Cup without any game time”. Dyantyi announced that he had tested positive for a banned substance at a Springbok training camp on 2nd July. He emphatically denied taking any prohibited substance “intentionally or negligently to enhance my performance. I have never cheated and never will.” He insisted his B-sample be tested, saying that “the presence of this prohibited substance in my body has come as a massive shock to me.” Now that the B-sample has come back positive, Dyantyi has some explaining to do if there is an innocent reason for the banned substances being in his blood. If he can’t provide a defence to reduce a looming ban, he could face being ousted from the game for two years. Eben Etzebeth had to answer questions from the Human Rights Commission after allegations that he had verbally assaulted a homeless man outside a Langebaan pub using racially-charged language. Etzebeth denies the accusations, but the issue isn’t going away that easily for him. – David O’Sullivan

SA Rugby can confirm being informed by the South African Institute of Drug Free Sport (SAIDS) that an adverse analytical finding had been detected in a sample collected from Springbok wing Aphiwe Dyantyi in a doping test on 2 July 2019.

Dyantyi’s B-sample also tested positive and he has now been formally charged with a doping offence for multiple anabolic steroids and metabolites.

SA Rugby, the Lions Rugby Company and Dyantyi are working with SAIDS, the World Anti-Doping Agency (WADA) and all other relevant authorities on the matter and no further comment can be made at this stage.

The purpose of the meeting was to advise the player of the role the HRC takes in relation to a complaint received, as well as the subsequent media reports relating to it, and to establish a commitment of cooperation between the two parties.

Both parties expressed their satisfaction with the envisaged process going forward and concluded by describing the meeting as constructive. The player denied any wrongdoing to the HRC and has pledged his full cooperation in the matter.