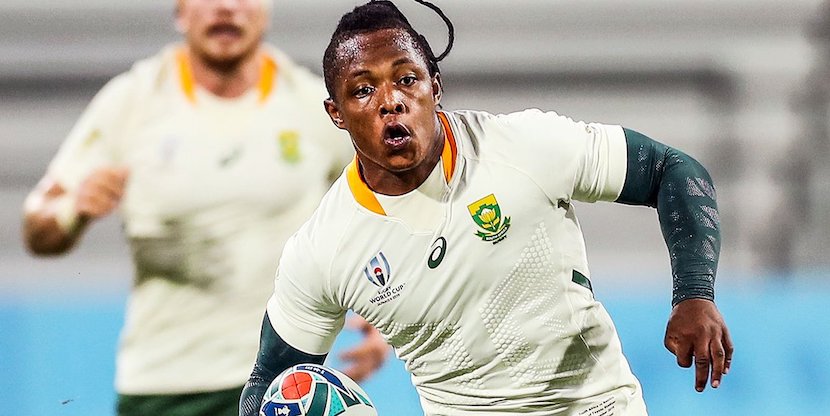 For 14 Springboks Sunday’s Rugby World Cup semi-final against Wales is unchartered territory. But nine Springboks have been here before, having played in that agonising two-point defeat to New Zealand in the 2015 semi-final at Twickenham. One of the survivors, Duane Vermeulen says those 2015 veterans know how to handle the pressure and turn it into something positive. Head coach Rassie Erasmus has kept his faith in the quarter-final conquerors of Japan (with the exception of the injured Cheslin Kolbe, replaced by the deadly finisher Sbu Nkosi). Will he keep his faith in the game plan that subdued Japan? The persistent box-kicks by Faf de Klerk prompted a slew of memes and gifs on social media, but the scrumhalf insists that the tactic gained the necessary advantage. Count on Wales coach Warren Gatland preparing his team for an aerial battle. There is a sense among Bok fans that South Africa will be facing 16 men on the park after the appointment of Frenchman Jérôme Garcès as referee. The Boks have won only one match out of 14 with Garcès officiating. No one in the Bok camp is dwelling on the matter. Erasmus feels his squad has built up the necessary momentum and is ready for a challenge which he says “just got a lot tougher”. – David O’Sullivan

Nkosi replaces the hot-stepping Cheslin Kolbe who has not recovered sufficiently from the ankle injury he suffered against Canada and aggravated in the quarter-final victory over Japan (26-3) in Tokyo on Sunday.

The last time South Africa won the Rugby World Cup was in 2007, winning 15-6 against England. We may just have an opportunity to do it again. Earlier I spoke to Siya and assured him and the team of our unwavering support ahead of the semis against Wales. Best wishes to our boys. pic.twitter.com/4Va2TDbTVp

The 23-year-old Nkosi – who has scored eight tries in his 10 Test appearances – slots into the right wing position as a direct replacement for Kolbe.

“It’s disappointing not to have Cheslin available as he has been brilliant for us since we first called him up last year,” said Rassie Erasmus, South Africa’s director of rugby.

“But we really rate Sbu and he will slot straight in. I am as excited to see what he can do as I would be if ‘Chessie’ were playing. Sbu has been very close to selection as it is.”

Big blow for the Boks as Cheslin Kolbe is ruled out of the World Cup semi-final against Wales.

Sbu Nkosi starts in his place.

Most people will be gutted with that news, Kolbe has been sensational at #RWC2019.

Nkosi has made two appearances in the tournament, against Namibia and a try-scoring show against Canada – on the left wing – to follow up try-scoring appearances against Australia and Argentina (two tries) in the two South African home Tests in 2019.

His injury-enforced inclusion is the only change to the 23 that had been entrusted to ensure second place in the pool (against Italy) and to secure a semi-final place (against Japan).

“We’ve been fortunate to have been able to be pretty consistent in selection and we’ve built some nice momentum,” said Erasmus. “But the challenge just got a lot tougher on Sunday.

“Wales are the reigning Six Nations champions – as well as Grand Slam winners – and apart from three defeats in their Rugby World Cup warm-ups have put together a really good sequence of results.

“But we’ve also found some rhythm and we’ll be ready for the challenge.”

Sbu Nkosi. What a wonderful space we find ourselves in – no Kolbe for the semi-final, so we select another destructive winger. A few years back we didn’t have this “luxury” in the Bok setup. In the words of Ron Burgundy: “I’m not even mad. I’m impressed!” #RWC2019 #SSRugby

The Springbok 23 includes 10 players who appeared in the Rugby World Cup quarter-final victory over Wales four years ago in England (23-19), and nine who are making a second semi-final appearance after losing to eventual champions, New Zealand, four years ago.

“We have been working hard for 18 months to put ourselves in a position to win the Rugby World Cup and that opportunity is now just 80 minutes away,” said Erasmus.

“These players have worked with unbelievable energy to get Springbok rugby back into this position and I know they will leave nothing out on the field on Sunday.

“We can feel the excitement coming from back home in South Africa and how much success will mean to our country. We know we’re playing for South Africa; that this is bigger than an 80-minute game of rugby.”

The winner will play the victor of the England v New Zealand semi-final in Yokohama on Saturday, 2 November.

South Africa’s semi-final with Wales kicks off at 11h00 (SA time) and is available on SuperSport channel 201 and SABC radio.

The Springbok team to play Wales in Yokohama on Sunday is:

Two of those Tests were played at Rugby World Cups: In 2011 South Africa won the Pool match in Wellington by the narrowest of margins by 17-16; in 2015 Wales and South Africa met in the quarter-final match at Twickenham for another close encounter, won by the Springboks, 23-19.

The referee is Jérôme Garcès of France. This will be his 15th Test match as a referee with South Africa involved and his 57th Test match in his career.

Ben Skeen, also from New Zealand, will be the TMO.