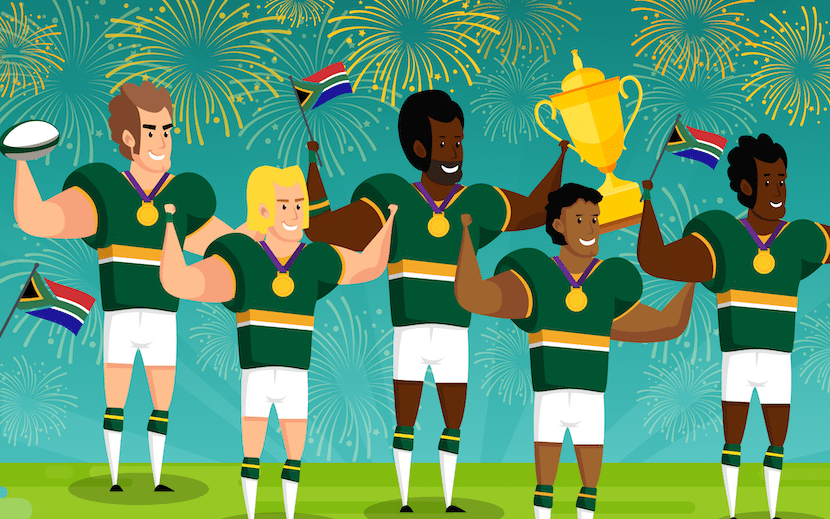 When the view from your garden is of the H-shaped posts that beckon the bouncing ball, you begin to see just how rugby can shape a nation, and turn its dreams into cause for reflection and celebration.

My house overlooks a school rugby field in the Parks of Johannesburg. We are near one of the try lines, with the 22 directly in line with the enormous tree that dominates our garden. I see rugby posts every day.

The school never takes the posts down year round. It is an Afrikaans primary school. Rugby is everything to the school. When they play mid-week games, the ball sometimes drifts over into my yard. “Can the ‘oom’ kick it back, please?” Yes, he can.

I sometimes sit outside on the patio to write. The kids are my alarm clock as they come out for first break at 10am and then second break at noon. Deadlines have been met because of those kids.

On Monday, they flooded on to the field for first break, every one of them wearing green and gold, some with 2019 Springbok jerseys, some the replicas from the 2015, 2007 and 2011 World Cups.

Some played at being the Springboks, reliving Saturday in their own way. They ran with the fast-stepping freedom of Cheslin Kolbe and the unbridled joy of Makazole Mapimpi, copying the two moments of the Rugby World Cup final when South Africa knew the day was won, when those two men romped down their respective wings to turn hope into heart-busting celebration.

The bottom of my garden is bare on the right-hand side. We ripped up the long, dense, reed-like grass there after an attempted armed robbery in December. The three men who tried to enter our house had lain there waiting until we went to sleep.

We found the trampled grass where they hid. I wanted all evidence of them in our garden destroyed. When the grass had been pulled out, we found three rugby balls that had been hidden there. I smiled and kicked them back on to the field.

On Saturday, when Rassie Erasmus, the Springbok coach spoke after Siya Kolisi had lifted the World Cup in Yokohama, he was, as always, unflinchingly honest and on point. Rugby was not the thing that will solve what ails our hauntingly beautiful nation, but it and the Springboks have become the thing that gives us some small hope, something to hold on to, a step on the path to the light at the end of the tunnel.

“Hope is not talking about hope and saying hope and tweeting a good tweet about hope, hope is when you play well. Hope is when people watch the game and have a nice braai and watch the game and they feel good afterwards, no matter your differences, for those 80 minutes you agree despite disagreeing about a lot of things. It is not our responsibility, it is our privilege.”

Hope is what drove Siya Kolisi when he watched the Springboks play in a tavern in 2007, when he was a kid and all he was thinking about was getting his next meal. He didn’t dream of lifting the World Cup. He dreamed of not being hungry and having shoes to wear to school.

Hope is having two leaders in Kolisi and Erasmus not afraid to talk about the realities of South Africa in public and to remind us that in the all the roaring joy, we need to work harder to fix this land. We are, as the slogan reminds us, stronger together.

The day after the 2007 World Cup final, I bought all the English Sunday newspapers and walked from my hotel room in Les Halles, Paris, to a pizza place around the corner. I ordered a margherita and a bottle of wine, and started to read. The win the day before began to sink in.

I thought of home and what this might mean, and became overwhelmed by it all and started to gently cry. I remembered the hope of 1995 and how naive that seemed 12 years later. I felt that hope again on that Sunday in October 2007 and wondered if it would change things.

Twelve years later, on the morning after the day before, I sat down to a margherita and a glass of wine on my patio overlooking the school field. It felt the right thing to do. I read the papers, South African and English, and of how this win in 2019 meant more. I read of how transformation was finally a real, living, evolving thing under Kolisi and Erasmus.

I read of hope and role models what that would mean to black kids who would have gone to bed hungry on the night after the final. I read of the hope of the World Cup wins and dreamed that it would be a real thing at the third time of asking.

I see rugby posts every day. After Saturday, they are signs of hope.