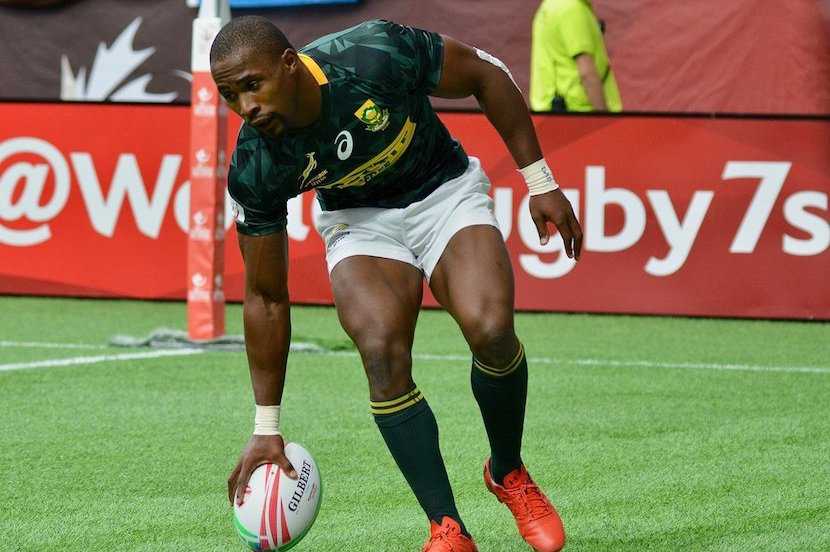 While Rugby World Cup euphoria lingers, it’s the turn of Springbok Sevens captain Siviwe Soyizwapi to emulate Siya Kolisi and lead a national rugby team to ultimate glory. It’s a big year for Sevens rugby with an Olympic medal up for grabs. The season starts with the HSBC World Rugby Sevens opener in Dubai from 5-7 December, followed by the Olympic Games in Tokyo from 27 July-1 August. Clearly lured by the prospects of Olympic glory, three top Blitzboks Seabelo Senatla, Rosko Specman and Ruhan Nel return to the side after making the transition to Super Rugby in the past year. The team is without last year’s captain Philip Snyman who has retired and the country’s most successful Sevens player Cecil Afrika who is injured. Dubai has been a good venue for South Africa with six victories in the UAE over the past 16 years. The last Blitzbok victory was in 2017 which kick-started the team to victory in the World Sevens series for the 2017/18 season. Last year, South Africa came 6th, after one of their worst performances in Dubai. Coach Neil Powell has had rich pickings when it comes to squad selection as the Academy continues to churn out players of extraordinary potential. In naming his squad for Dubai, he continues to blood the youngsters by giving them opportunities alongside players of vast experience, ensuring that South African Sevens rugby continues to be a powerful force in world rugby. – David O’Sullivan

The winger, who will run out in his 29th tournament for the Blitzboks, has been named captain for the new season by Springbok Sevens coach Neil Powell, and will take the field along several experienced and decorated Sevens players returning to the national squad for the series opener at The Sevens Stadium.

Senatla, Sage and Nel return to the World Series after a year’s absence. They will join second-year Blitzboks in JC Pretorius and Kurt-Lee Arendse, who will take the field in Blitzbok colours for the first time in Dubai, having played for the SA Rugby Sevens Academy in last year’s tournament.

Ryan Oosthuizen, Chris Dry, Zain Davids, Selvyn Davids and Justin Geduld will again form the core of the team, with the latter nearing the 1,000 points mark in the World Series.

Powell said selection was tough, especially as their preparations are well on track.

“I think we are better prepared compared to the same time last year,” said Powell.

“We had warm-up tournaments in Germany, Kenya and England and everyone had a good run in at least one of those. Selection was tough, as most of the regulars are available for the opening tournament.”

Players such as Werner Kok, who just returned from Toulouse where he was a medical joker, and Hacjivah Dayimani have been named in the SA Rugby Sevens Academy side that will also play in Dubai to get some valuable game time, Powell explained.

SA Rugby Sevens Academy graduate Christi Grobbelaar will travel as 13th player and if called upon, will make his debut in the World Series.

“We had a poor start in Dubai last year and it took us a while to recover from that,” said Powell.

“We can’t promise anything this time around, but I am pretty sure the effort will be there and if that is the case, we will be very competitive.”

The squad won the tournament in Germany and were losing finalists in Kenya and England, with Powell adding: “Those results were good for us, because it removed any complacency we might have had. The margins between the teams in the World Series are so small that one bad game will punish you. We will be very aware of that.”

Soyizwapi took over the captaincy for the last four tournaments last season after Philip Snyman got injured. The Maclear-born player said he is comfortable in his new role.

“We have a number of experienced players in the squad, which makes my job much easier. The leadership group in the team is also settled and that helps a lot,” said Soyizwapi.

“We have prepared well and worked hard to be ready for this. The first tournament is normally one of the toughest out there and everybody is still fresh and eager to make their mark, so every match is a real battle.”

South Africa face England, Spain and Kenya in Pool D of the tournament, while HSBC World Rugby Sevens Series champions Fiji will face France, Argentina and Japan in pool A. In pool B USA, Australia, Scotland and newcomers Ireland will battle it out. New Zealand, Samoa, Canada and Wales are in pool C.

The Blitzbok squad is: