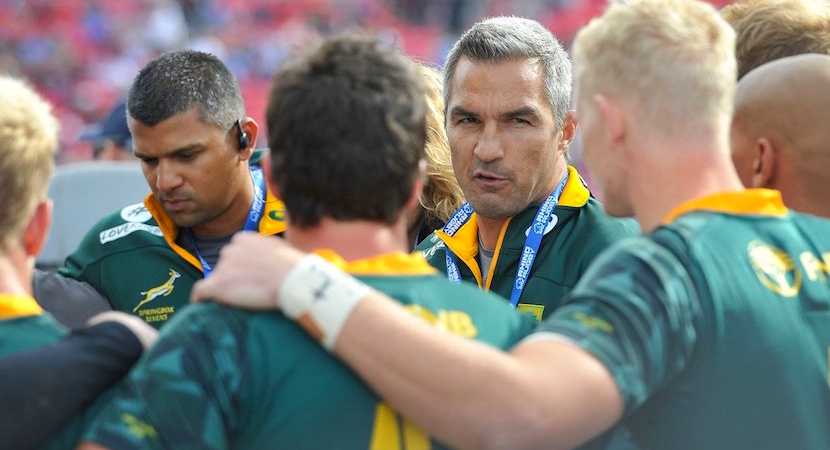 Injuries have been one of the major headaches for Blitzbok coach Neil Powell during the 2018/19 World Sevens Series competition. After almost every tournament, he’s seen the battered and bruised make way for exciting but inexperienced youngsters or patched-up veterans. As the season draws to a close with very little to play for except pride and an extremely slim chance of finishing in third place, the revolving injury door swings once again into action. Kurt-Lee Arendse and Stedman Gans were ruled out of the Paris tournament on Monday, Arendse with concussion and Gans with a hand injury. Then on Tuesday, Selvyn Davids had to pull out due to personal reasons. Powell has plenty of players waiting in the wings, and none more exciting than the most successful Blitzbok of them all, Cecil Afrika who makes a return to the side after a year recovering from an excruciating hamstring injury. South Africa come into the final tournament trailing New Zealand by 12 points. It’s too big a margin to make up in one tournament to overtake the Kiwis. England trail South Africa by 22 points, which means the Blitzboks can’t be overtaken and will, in all likelihood, finish the year in 4th place having secured the vital automatic Olympic qualification. – David O’Sullivan

A day after arriving in the French capital, the Springbok Sevens team have been reinvigorated by the arrival of new team members, a hint of deja vu and the realisation that the sun did rise after a seventh place finish at the HSBC London Sevens.

Three new faces joined the squad today, as Cecil Afrika, Dewald Human and Mfundo Ndhlovu all brought smiles and some pent-up energy to the team, having replaced Stedman Gans, Kurt-Lee Arendse and Selvyn Davids for the weekend’s HSBC Paris Sevens, the last of the ten tournaments in the HSBC World Rugby Sevens Series.

The deja vu comes from last year, where the Blitzboks pulled the World Series crown out of the grasp of Fiji to win a consecutive series title, with three new faces also joining them prior to that finale in Stade Jean-Bouin. Like then, the new members brought smiles and confidence from Stellenbosch, something that Werner Kok says, will help them this weekend, where they face Australia, Wales and Kenya in Pool B.

“We needed their arrival to bring that energy, as we are hard on ourselves and a bit down following London,” said Neil Powell. “They came smiling and believing, so we are all back to deliver a determined effort.”

The Springbok Sevens team were forced to call up a third replacement on Monday in Dewald Human, in the place of Selvyn Davids, who has withdrawn from the squad due to personal reasons.

Human had to hurry to Cape Town International Airport and left South Africa on short notice late on Monday evening. He will join two other injury replacements, Cecil Afrika and Mfundo Ndhlovu, in the French capital on Tuesday.

Straight from the airport to the training ground but who minds when you get a welcome like this. Dewald Human joined the team in Paris this afternoon after being called up late Monday afternoon @CastleFreeSA @FNBSA @ASICSRugby @ASICS_ZA pic.twitter.com/VL72fYbNji

It will be a special week in Paris for Afrika. A year ago, his dreams of celebrating a second HSBC World Rugby Sevens Series title with the Blitzboks in France were shattered when his hamstring ripped right off the bone in London. The experienced playmaker limped back to Cape Town, not knowing that it would eventually take 12 months for him to return to his beloved Springbok Sevens team.

Passing each other somewhere over Africa that night, Human, on his way to Paris to replace Afrika, had big dreams of helping the Blitzboks win the final at Stade Jean-Bouin, where he made his debut the year before.

Human managed to score in what turned out to be a crazy final against England and at the end of the Paris tournament, he not only celebrated the World Series victory with the Blitzboks, but he was also named Player of the Final.

Twelve months later, both Afrika and Human will be in Paris to come to the aid of the Blitzboks.

For Human, who played in Dubai, Cape Town, Hamilton and Sydney in the current season, this is an opportunity to redeem himself, following some fluctuating performances in the opening four legs that followed that Paris masterclass in 2018.

And for Afrika, who replaced the injured Stedman Gans, it is a chance to prove to himself – and others – that he can still play amongst the great names in the sport, where his name as South Africa’s leading points’ scorer of all time is inked in, seemingly with a permanent marker.

The two playmakers had different points to ponder on their way to the French capital, but both placed themselves at the main end goal – to contribute to the team and deliver an effort that would benefit the Springbok Sevens.

“It was hard for me at times,” Afrika admitted before departing from Cape Town.

“The rehabilitation process was slow. At times, too slow, it felt. But I realised that I needed time and that it will take as long as it took for the tendons to heal and for me play pain-free again.”

The 30-year-old Afrika, who overcame a serious knee injury in 2013, worked hard and he is grateful for those who looked after him on his road to recovery.

“Our medical staff did wonders – there were dark times, to be honest, but thanks to their encouragement and the positive words of loved ones and friends, I kept going,” said Afrika.

“I still have some dreams and goals to achieve in this game, with this team, so to be back means so much. Even in circumstances such as these, having to replace a team mate that is in pain and discomfort.”

Human is ready to continue his love affair with Paris. He once dreamed of playing at Roland Garros and serving aces, but now he is pretty much focussed on being the best Blitzbok squad member he can be.

“It is funny that so many good things happened to me on this field,” Human said.

“It is just one of those things, I suppose. Hopefully I can contribute again and help keep up the standards we created over the last couple of seasons.”

With the World Series title now a dog fight between Fiji and the USA and the passage to Tokyo confirmed, Human hopes for some opportunities to express himself.

“I am expecting Coach Neil (Powell) to tell us to go out and enjoy ourselves. We have done the hard work. I have not played with the squad in a tournament in a while, so will need to fit in quickly, but I am keen to bring the vibe into the team,” said Human, who believes the Blitzboks will strike back this weekend.

“We did not have our best tournament in London, but everybody will be keen to turn things around and make the country proud again.”

The last two days delivered some introspection, with coach Powell requesting the players to analyse and provide feedback on their own performances at Twickenham.

“We all had a good look at ourselves and what we did on the weekend. The stats were not that bad, to be honest, but we did let ourselves down at crucial times. Our decision-making was not that great and we did not play directly enough at times.”

Kok, in his 47th tournament in the series, said the review did provide some good elements of play as well, and it is those that will be continued in Paris.

“We did take in a lot by watching our games and do some self-analysis. We did the same in Vancouver and Singapore, in fact, and had good results after that. I think we will be ready this weekend, especially as the three new guys will also be bringing it on.”

The team had the third best defensive record in London, third best tackle completion rate and with Fiji, have 22 wins in their last 30 outings, the best winning percentage on the series.

Kok has made 115 tackles so far, third highest on the series.

“There was one or two that I missed, so will be making up for that this weekend,” he said.