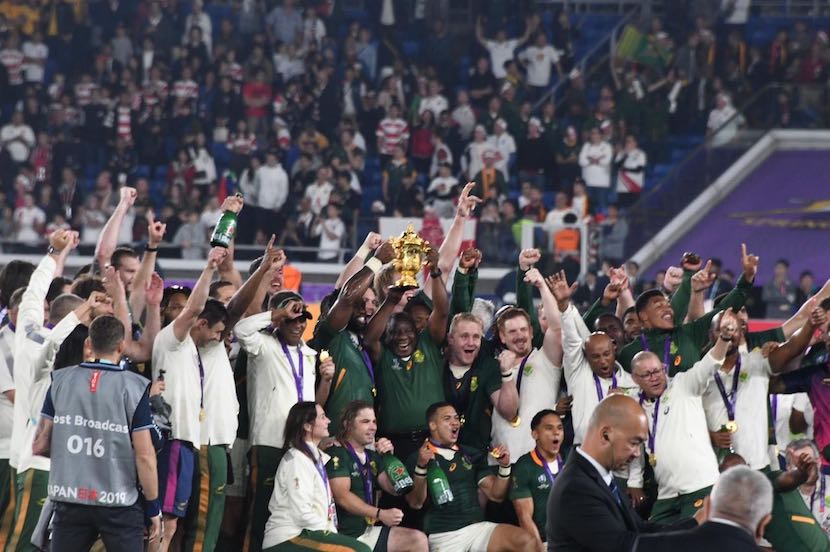 If, like me, you’re starved of rugby, you’ll probably have gloried at least once, if not more times, in replaying the Springbok’s famous Rugby World Cup televised victory in Yokohama. The common wisdom is that the Boks outplayed the English with a magnificently spirited display, marked by several flourishes of individual brilliance. Yet here, an avid rugby fan applies his razor-sharp legal mind to the tactical and often downright basic blunders the Red and Whites made, sharing the defining moments captured on camera. In this series, Tony Clulow singles out a dozen basic errors that turned the game against the English. Each time the Boks capitalised, whether it was Handré Pollard slotting the ensuing penalty, or Lukhanyo Am cleverly delaying the pick-up of an awkwardly-bouncing ball sent flying by a brutal Marx-tackle on Henry Slade. Am flicked the ball out to Du Toit for that legendary side-step try of Cheslin Kolbe in the corner. If Eddie Jones had simply told his players, ‘hold onto the ball and pass accurately,’ and/or ‘minimise the scrums,’ beforehand, (or even at half time when they were 12-6 down), England could have notched up a victory as famous as their semi-final one against the All Blacks. – Chris Bateman

Months after the 2019 Rugby World Cup Final there is still no definitive answer as to how a side which was an overwhelming favourite to win, could lose by 20 points. Most English commentary put emphasis on the physicality of the Springboks and the injury to Kyle Sinkler; but any team which includes Billy Vunipola is hugely physical. For instance, in the first 20 minutes two South Africans, hooker Bongi Mbonambi and lock Lood de Jager, went off with injuries and later in the half, first Eben Etzebeth and then Duane Vermeulen called for attention for bruised shoulders. The physical battle resulted in casualties on both sides.

South Africans tend to concentrate on what the Springboks did right, as did The Squidge Report in a perceptive analysis.

After the match England fly-half, George Ford, was interviewed and gave as a reason for England’s loss; “We were massively inaccurate in the first half.” Former Springbok World Cup winner, Bryan Habana, said the Springboks, “Won every big play”.

While not detracting from how well the Springboks played on the day, this piece is an attempt to identify English inaccuracies in execution and failures on the big plays, and show how these affected the outcome of the match. 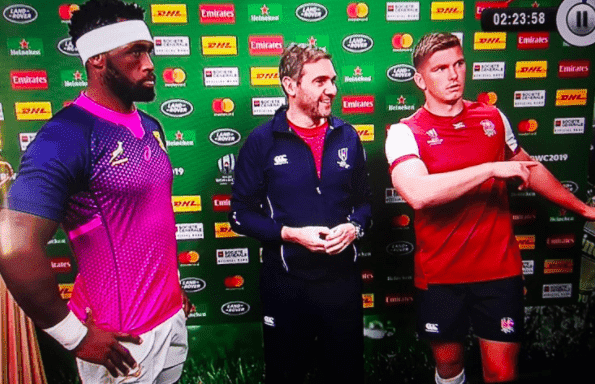 Against New Zealand, England won the toss and opted to kick off. This immediately put them on the attack and within two minutes they had scored a try.

Curiously, against South Africa England also won the toss, but allowed South Africa to kick off. Because of this, it takes 10 minutes for England to get out of their half.

World Cup winning coach, Sir Clive Woodward warned England if South Africa “were still in the game” after 60 minutes, the strength of the Springbok pack would become a problem.

In The Rising Sons, Eddie Jones is seen stressing to his team the importance of getting on to the front foot. However, the decision on the kick, conversely put the Springboks on the front foot.

So why did Owen Farrell make this decision? Most likely it was at the direction of the coaching staff. The Squidge Report suspects it was part of a plot to start the second half with a determined attack and a quick score; but by the second half, the Springboks were playing with the confidence of players who knew the match was theirs to lose, while England were not the force they had been against New Zealand. Letting the Springboks start the game gave the Boks an advantage, which they never relinquished. South Africa was first to score and were never behind; while England were always chasing the game. 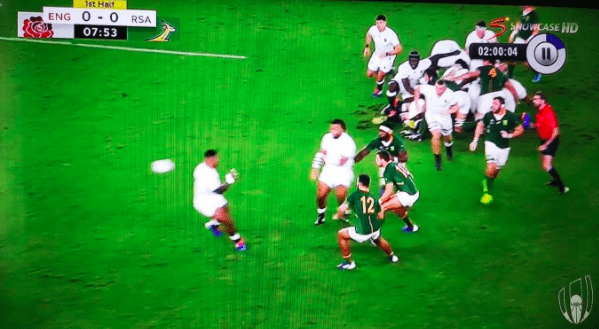 An English scrum on the English twenty-two. The Springboks put in a good shove, but the ball comes back to Billy Vunipola who runs hard around the open side of the scrum. The defence is waiting, but Vunipola has options. The more the South African backs are made to tackle the hard- muscled English forward, the better; he can clatter into Pollard and set up the maul. In what looks like a planned move, Manu Tuilagi moves sideways across the field drawing close to Vunipola, where a short pass to him will change the angle of attack and force defenders to cope with Tuilagi’s greater speed. George Ford and Farrell are on Vunipola’s outside behind Tuilagi, so Vunipola can pass to Ford. In the confusion created by Tuilagi’s cross-field movement, hopefully a gap will open up for Farrell or winger Anthony Watson. Altogether a bold, well-planned and well executed stratagem. Until the pass.

Vunipola did pass, but he passed without looking where the ball was going. The pass went behind Tuilagi and missed Ford; it bounced in front of Farrell, who did well to gather the ball, but was tackled and isolated and so held onto the ball rather than let Vermeulen take it off him. Penalty and first points to South Africa.

Because of an errant pass, a bold and promising set-move ended in a soft penalty for the Springboks. 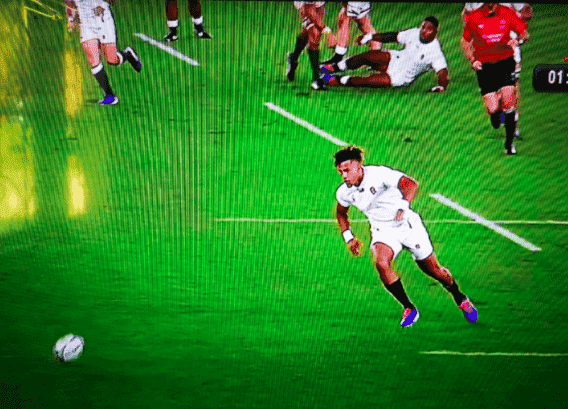 England win a lineout. The ball is with scrumhalf Youngs. It seems as if a planned move has been initiated involving English forwards circling the scrumhalf, but because Faff de Klerk keeps getting in the way, Youngs cannot find the killer pass. Eventually more in frustration than hope, he tries a long pass. The ball goes nowhere near an English player and bounces into touch. Hard won possession absolutely wasted. The English eight will have to expend valuable time and energy getting the ball back. What are the English forwards muttering as they line up to tussle again with Eben Etzebeth?

Not a blunder but a big point: England win their own lineout and start moving the ball. The England forwards are now handling confidently and attacking the gain line. Mbonambi tackles Lawes and is down with a knock to the head. England rumbles on. De Jager tackles Billy Vunipola and is left with a seriously damaged shoulder. The Springboks continue to tackle desperately, but are clearly under pressure. 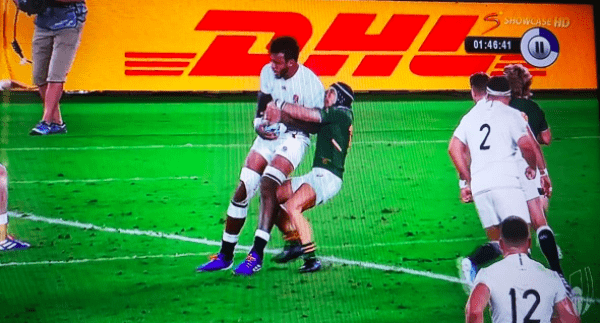 England are now spread out across the field. There is a clear overlap. The ball has only to go down the line for England to score. The ball is passed to Courtney Lawes, but before the big lock can pass it on, the diminutive Cheslin Kolbe springs tigerishly, pinions his arms so he cannot pass, and then throws him to the ground. Not satisfied with having saved the try, Kolbe tries to win the ball and is penalised. Farrell converts the penalty to bring the scores level.

For England a great passage of play. Eddie told them to be brutal and they put two South  Africans off the field. More to the point the passes were being given and taken cleanly. This side can win.

The South Africans know they are in a fight and will have to tackle themselves into a stupor. They were however not too concerned the movement cost them three points, because the brilliance of Kolbe saved them from conceding a match-defining first try. Injuries are a concern, but they have excellent replacements on the field and they have a chance to regroup and refocus.

World Cup winning fly-half, Joel Stransky, felt a skip pass over the head of Lawes would have been a good idea. Nah… England must stay with the short accurate passes, which make Lawes, Tuilagi and the Vunipolas lethal weapons.