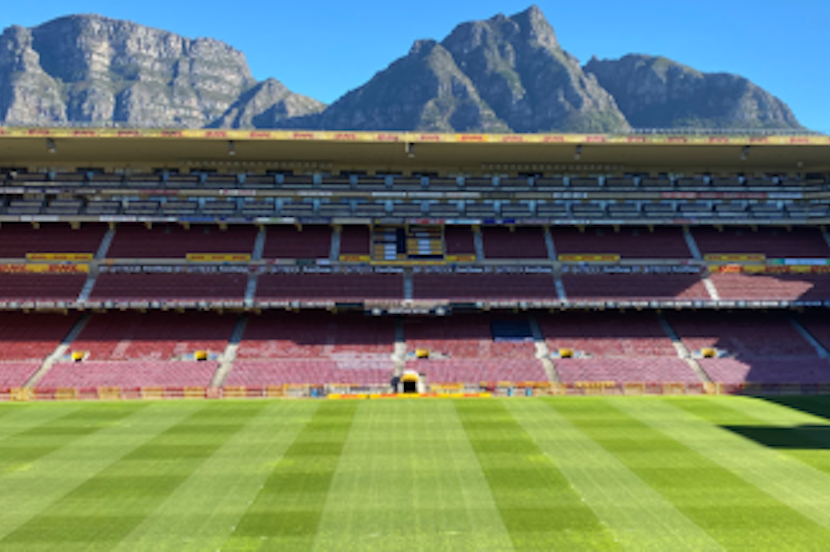 South African rugby fans and lovers will forever miss one of the country’s great stadiums, Newlands. Enriched with history, the ground will be remembered by players and supporters alike for a stadium filled with an electric atmosphere and energy. Home to the famous blue and white hoops of Western Province, Newlands was revered for its partisan-like crowd. The faithful would come out in their numbers without fail, supporting and cheering until the final whistle. It’s rather ironic and sad that the ground’s final swansong would see no fans enter its doors, the same entrances which many of us will come to reminisce in the years to follow. – Justin Rowe-Roberts

As a sad sun slowly sets over Newlands and behind Table Mountain, legions of players and fans sitting in the dark, silent shadow of a final Western Province defeat can now only reflect on past, if not present, glories of a sporting cathedral that came to symbolise both rugby awe and excellence over its 131-year history.

The battles, the legends and the magical moments are plentiful, but what made the arena special was the symbiotic energy that flowed between the players and their passionately adoring supporters.

Great sports stadiums of the world are as much defined by the feats of gladiators on the field as their fans inspired off it.

Among these citadels in rugby are the old Cardiff Arms Park and its successor, the Millennium Stadium in Cardiff. I never had the privilege of experiencing the old Arms Park, but my Welsh friends of that vintage still speak of it in reverential tones. But I was in Cardiff in 2005 to watch the Springboks defeat Wales 33-16. The defining memory of that test was the Welsh choir, all 80,000, continuing to sing with unbridled passion with 20 minutes to play when it was obvious that Wales were not going to win.

My personal favourite rugby anthem is of Gaelic extraction, not Welsh, sung to the chorus of The Fields of Athenry. Perhaps due to the Irish roots of my grandmother and also because I now live in Australia with greater awareness of what it meant to leave one’s homeland destined for a far-away colony.

At the pinnacle of football is Liverpool’s Anfield Stadium, notably the hardcore supporters seated behind the goal at the world famous “Kop” end (named after the battle of Spion Kop during the Anglo Boer War) singing and supporting with a passion to match that of their Welsh rugby peers.

Liverpool’s famous You’ll Never Walk Alone anthem is arguably the most famous sports song in the world. Even though I’m no Scouser, I get goosebumps listening to Anfield chorusing the inspirational lyrics first penned by Rogers and Hammerstein in 1945.

These never-say-die supporters have lifted their team to miraculous comebacks – most recently in the 4-0 defeat of Barcelona in the semi-finals of the Champions League that swept the Reds on to European Cup glory in 2019. A 3-0 win against the best team in the world wouldn’t have been enough and if Barcelona had scored just one goal, Liverpool would almost certainly have been eliminated on the away goal rule. You always know Liverpool will be back as a Tour de Force when their fans sing, even in the midst of their most crushing defeats.

And it’s why visiting teams speak in awe of the intimidating atmosphere, climaxing as they walk into the cauldron of battle to be greeted with the famous words ‘This is Anfield’, just above the tunnel entrance.

South African sports fans do not have the singing heritage to match their Anglo-Saxon counterparts, but can be as intimidating and are no less passionate, as reflected in the atmosphere of the 1995 Rugby World Cup Final at Ellis Park.

My favourite childhood memories of South African fans include Arcadia Shepherds’ 2-0 defeat of the mighty Highlands Park in the 1974 Castle Cup Final at the Rand Stadium. Highlands’ Scottish manager, the late Joe Frickleton, had famously said he would jump off the Brixton Tower if Arcadia won. During the match and long after the final whistle, the joyful Pretoria fans taunted the mighty Joburg’ team with chants of “jump Joe jump” to celebrate Arcadia’s’ first trophy.

The most electric atmosphere were the double-headers of the early 1980s at a packed Ellis Park, mostly featuring Kaizer Chiefs and Orlando Pirates. In those days it was still safe to go to these games and the bonus was Johnny Clegg and Savuka, not to mention the late Abdul Bhamjee, performing live in between matches.

Conversely, I was brave enough to watch two games of soccer in the riotous arena of the Maracana Stadium in Rio de Janeiro and lived to tell the tale. The match was a stop-start affair punctuated by fouls, arguments with the referee and little free-flowing football. Most of the action was in the stands where riot police periodically beat rival supporters back to enforce social distancing. After the game I had to run for my life to escape the war outside as Botafogo and Sao Paolo fans tore into one another. I still can’t remember who actually won the game, such was the overpowering memory of the madness.

I’ll never know why, a few years later, I went back for a second Maracana ordeal that was even more terrifying. We made the mistake of sourcing tickets and a lift to the game from a Botafogo tragic and ended up sitting among their most zealous supporters. I could sense trouble brewing with 10-minutes to play and Botafogo on the verge of an upset win over the indomitable Flamengo. I wanted to escape the stadium early, but our host was having none of it. Consequently, we ended up exiting with a mass of Botafogo fans who were, without provocation, attacked by baton-wielding police. I still believe that the only reason for the assault was because those police wore Flamengo jerseys under their riot gear.

I then understood why the field around the Maracana had a moat around it, an underground tunnel for the players and referee to escape to if the moat was breached and why a soccer game between Honduras and El Salvador was the trigger for a declaration of war, which lasted for four days, in 1969.

Having only moved to Cape Town in the mid-1980s, my first experience of Newlands was belated, but beautiful, because it was in this hallowed arena that I savoured something unique to South African sport.

Province had an all-conquering team in the ‘80s, having risen to the pinnacle of a rugby empire built by Springbok and WP lock — and later Province President, Jan Pickard. From the kick-off against Transvaal, you marvelled at the deep appreciation of the crowd. You could feel the murmur as the Province players, sensing the stirring of their supporters, began to lift their game. It was a rustling orchestra rising to a thundering crescendo by the time WP were running amok.

It was special and I left Newlands with a sense of wonder at the awareness of why the stadium was such an intimidating fortress.

I didn’t know then that Newlands would later on become such an integral part of my life for 13-years as a sports writer, during which period I saw every Springbok test and WP match played on its hallowed turf – and missed only one Stormers’ game.

Newlands still had its magical aura during the early years of Super Rugby, sustained through the period when Carel du Plessis inspired the team to play such free-flowing, creative running rugby before average Currie Cup crowds of 40,000. But Province under the Prince of Wings stumbled at the final hurdles and never won any trophies. This amplified the critical chorus calling for WP to adopt the “more pragmatic” tactics of their arch-rivals, The Bulls – a kicking game reliant on a dominant pack and backs who would only run within the safe sanctuary of enemy territory.

Today, some of those critics are lamenting the deflating, stop-start sleep fests of this year’s Currie Cup with every team in South Africa virtually having the same playbook. The dominant strategy is to win penalties, primarily in the scrums, mauls and rucks, kick possession to secure territorial ascendancy and then boot the points to pile on scoreboard pressure.

The 15-man running game is going extinct and the fans are switching off. One colleague, former SA sports editor, journeyman journalist and lifelong sports tragic, Rob Taylor, described the recent semi-final matches as “possibly the most two most boring Currie Cup playoff games … ever.

Gavin Fernie, a UCT club player of the swinging sixties, opted out of the torture after rarely missing a game at Newlands for four decades up until the ‘90s. Fernie did not switch on the TV for Province’s last battle to avoid tarnishing his own cherished memories, but doesn’t blame the players or coaches for the repetitively boring game which unfolded.

“The ‘gees’ of club rugby at Newlands was the platform which created the great Province teams of the 1982 to 1986 era. The architect who created the administrative, organizational and players come first climate necessary for the success of that exceptional team, was undoubtedly Jan Pickard,” Fernie said.

“My dear friend, the very best storyteller of rugby in South Africa during his lifetime, the incomparable Paul Dobson, would agree with me about the crucial role Jan Bull played in creating the fertile climate which nurtured a club rugby culture leading to Province becoming Currie Cup Champions for five glorious years.”

Newlands’ demise started long before COVID, climaxing in the sad swansong of WP’s defeat to the Sharks beneath soon to be demolished seats sitting silent and lonely. Standing in the dock before the defenceless, great old dame is brutally battered into rubble, are a succession of feeble and incompetent WP administrators. In the eyes of true-blue Province supporters, these latter-day custodians are seen as both treacherous and treasonous.

The stadium had been decaying for some time and the rot first set in in the early days of Super Rugby with the blaring of music from loudspeakers during play. No great sporting theatre in the world would drown out the voice of its supporters with artificial razzmatazz, or try to coax subdued fans into battle cry. That’s the job of the players within an ebb and flow dynamic and if the fans are silent, there’s a reason for it.

The last game I saw at Newlands was in 2014 and The Stormers (I prefer Western Province) beat the Highlanders on a typically blustery Cape day. By that stage the once revered orchestra of the Newlands faithful was being supplanted by a growing number of intoxicated and obnoxious attendees who were there more for the party than the play. Many Cape born-and-bred locals supported rival New Zealand teams, the standard of rugby was in decline and WP had long since abandoned the roots of its running rugby traditions.

Although the tragic epitaph of Newlands’ latter years did not do justice to the great stadium, there is consolation that it’s sad ending can never erase the glory of an epic legacy, which saw so many of the game’s greatest gracing its majestic surface. It would be an injustice to mention only a few players, at the expense of so many. Suffice to say, each and every one of them, great or small, played a part in its revered history.