Steinhoff is trading on a market cap of R131bn. It ranks number 10 in terms of highest revenue of all JSE listed shares. It produced just shy of R10bn in profits in 2014. In isolation, all these figures really tell us, is that Steinhoff is a big business.

Financial engineers, adroit deal-makers, business alchemists are all arguably appropriate designations for Markus Jooste and the team at Steinhoff International (SHF). Surely, for investors, the true measure of success of a company’s management team is to determine how effective they have been in generating returns on investors’ funds.

All too often, value investors get enticed by metrics like a low PE ratio. However Warren Buffett is quoted as saying that among the criteria he looks for are “businesses earning good returns on equity while employing little or no debt and that are simple to understand.”

Wading through the accounting schizophrenia in Steinhoff’s financials is probably as challenging as trying to accurately deconstruct a Heston Blumenthal chef-d’oeuvre.  I would not feel defeated if I missed some clever trick or vital ingredient.

I suspect that Steinhoff would not pass Buffet’s “simple to understand” test. A measure that is favoured by investors like Warren Buffett and that serves as a great complement to other value measures is return on equity (ROE).

The more effectively management uses the company’s resources, the higher the ROE will be. So Buffet may well be interested in South African companies like Woolworths with a ROE of 46%, or Santam with a 32% ROE, but Steinhoff floating on a ROE of around 12% might not make the grade (see Table 1).

What makes the ROE ratio so powerful is that it is impacted by debt levels, how quickly assets are turned over and profit margins. Steinhoff has not been shy in taking on debt. Some leverage is encouraged in order to get high ROEs.

The trick is to get the balance right. On the other hand Steinhoff’s operating profit margins are hardly attractive at a mere 8,4%. Steinhoff operates as both manufacturer and distributor in their furniture side of the business. While these low operating margins might an industry phenomenon, it begs asking why you would want to be invested in that industry.

Another aspect that affects ROE is when the company continues to increase its shareholder capital. Steinhoff has been very active over the years in either issuing new shares to make acquisitions, or raising capital by means of convertible bonds or rights issues (they have just concluded a R18,2bn book build).

In 1999, after Steinhoff listed on the JSE, it had approximately 663m shares in issue. Since then, issued share capital has increased by an average of 11,5% per annum, the most aggressive increase is over the past few months, where issued shares have increased 26% from the 1,825m recorded in 2013 results to the 2,459m shares in issue today (see Table 2). 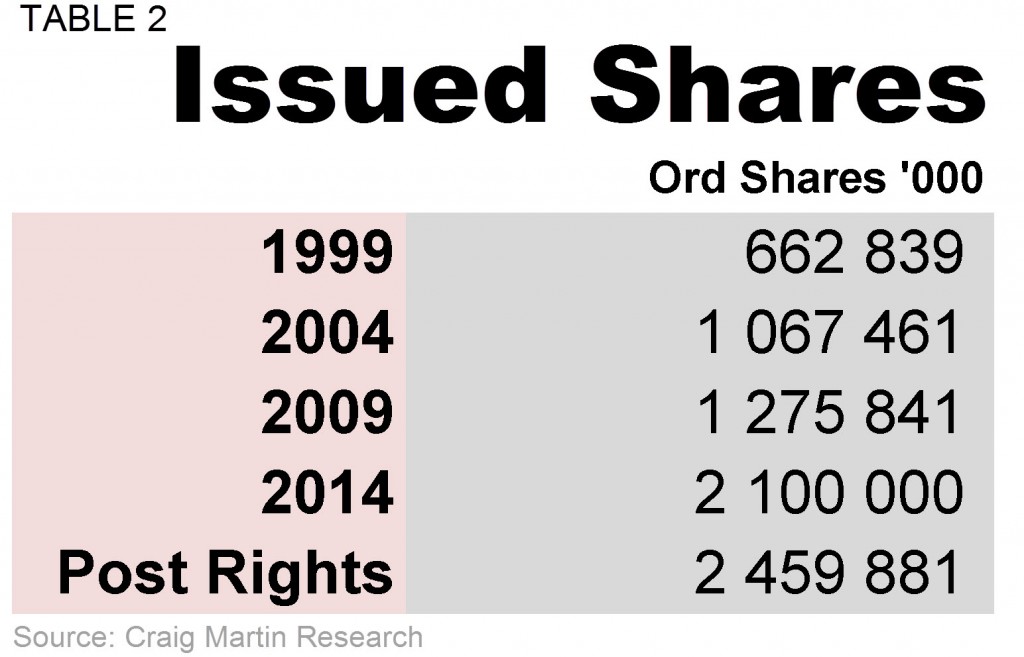 In his 1992 letter to Shareholders of Berkshire Hathaway, Buffett wrote, “Leaving the question of price aside, the best business to own is one that over an extended period can employ large amounts of incremental capital at very high rates of return.” An ROE of less than 15% is generally considered to be on the poor side. Assuming everything is equal (which is generally a lousy notion, but worse still with Steinhoff), then considering the state of affairs post-rights issue, Jooste is only mustering a ROE of 11,4%.

In these last set of results, it would seem that Jooste chose to employ his capital in boosting the groups property portfolio, which is now sitting at R45,4bn. It remains to be seen how creative Steinhoff will be in being able to extract value for shareholders here.

The facts are, if you look at headline earnings attributable to ordinary shareholders, you can see than 100% of the growth came from Rand weakness. While Steinhoff’s share price has been nothing short of spectacular since around May 2013, it really languished in prior years. It is my view that in the absence of some financial alchemy, and a weakening Rand, Steinhoff will struggle to put on a good show next year.