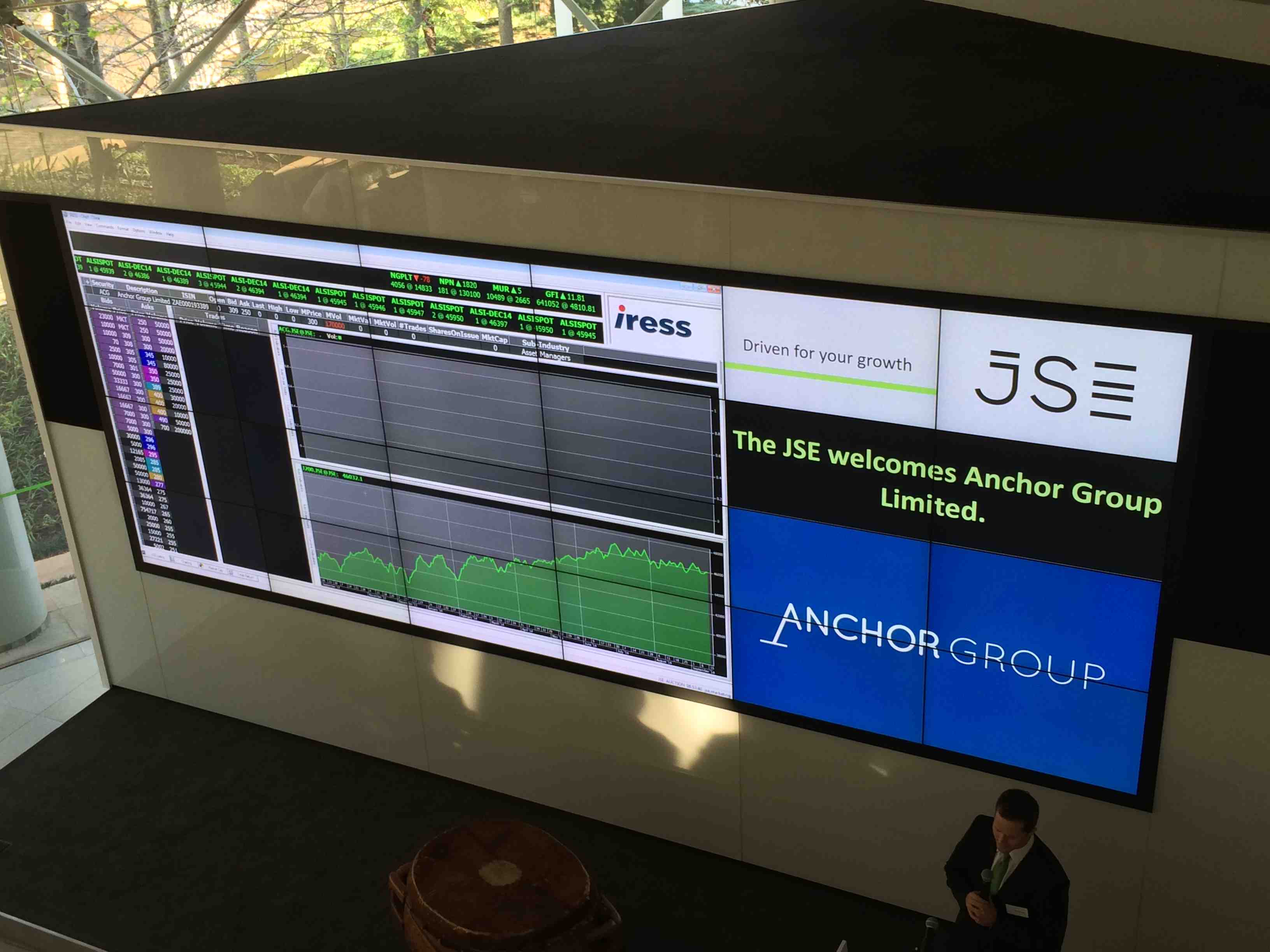 Chief executives are naturally optimistic. They need to be to shrug off challenges and devise new ways of adding value for shareholders. But sometimes even the greatest optimists feel compelled to call a halt to irrational exuberance (courtesy Alan Greenspan) as Peter Armitage, CEO of today’s new listing Anchor Capital, did in this interview. The shares were privately placed at 200c, a level where Armitage believed buyers were getting value. The first trade was at a 50% premium – and by lunchtime the stock had reached almost double the placement level. Armitage’s reality check adds to an already fascinating interview.  Have a look down the page for a video of the first few seconds of trade – complete with a drum banging CEO,  ululating maidens and chanting supporters.  – AH

PETER ARMITAGE: Yes, I’d say two things: (1) the market sets our valuation. To give you an indication, we felt we weren’t overpriced, where people could make money out of our share. We valued that at R2, which was taken up. I think the market’s in a bullish mood. It’s taken it higher. It’s not the value that we’ve given the share, but I think what you must understand as well, is that Piet’s assets will be earning 30/40 basis points. From our high net worth private client market we’ll probably be earning about one-point-four percent, so it is a slightly different business.

PETER ARMITAGE: Well, I can’t speak for his business but in our business, we project… We’re currently doing about one-point-four percent on assets.

ALEC HOGG: You raised R60m and the question is how you’re going to apply that. Where are the acquisitions going to be made?

PETER ARMITAGE: Alec, firstly, we review our business as an investment process – that’s our factory where we have very talented people. For a business our size, we have an investment team of 15 people, which is bigger than many big asset managers out there are. We take it quite seriously. Then it’s about putting money into that factory, so to speak, so everything is based around that as a philosophy. There’s quite a bit of consolidation of opportunity in this market. There are some smaller players where you can bring their assets on, and put it through our factory without bringing the costs on. It comes in the shape of companies and people, but we’re not trying to create a diversified financial services business. It’s about asset management excellence, focusing on that, and making it work.

ALEC HOGG: What I’m getting at is we know there are many financial advisors who have big books that they look after. Is that where you’ll be spotting? Let’s say a guy looks after a R200m book or a R400m book. If you plug that into your process that would surely…

PETER ARMITAGE: That’s certainly something worth some cash and some shares. These are nice assets to have in those kinds of negotiations.

GUGULETHU MFUPHI: What about the shareholding? Some of your staff do own shares in the company. Does that change at all now?

PETER ARMITAGE: Just prior to the listing, we facilitated quite a lot of staff-bought shares in the business. It’s about 61-percent held by the directors and staff, and about 40 percent free float. In fact, what I was scared of today was that there wouldn’t be any trader talk, so we were quite pleased that there was some market activity.

ALEC HOGG: So where did the trade come from? Who was selling?

PETER ARMITAGE: I have no idea. I was actually more worried about sellers. We had a ridiculous demand as we came up, so we knew there’d be buyers but certainly, not from that 61 percent because if it did it would have to be announced at SENS.

ALEC HOGG: I went through this in ’99 as you well remember with Moneyweb, and I had everybody knocking on my door to say ‘please, can we have stock’ because it was a guaranteed winner in the Internet bubble. You probably went through a similar thing where people whom you hadn’t heard from for years, wanted a few shares because clearly, they would have made a nice turn. How do you deal with that?

PETER ARMITAGE: Well, my secretary said I had a lot of old friends that I hadn’t spoken to for ten or 15 years. We take it as a big compliment, but we’ve been in the market a long time as well. We’ve seen ups and downs. As I said to you earlier in our discussion, I’m sure 60 percent of what’s happening is about the market and not us. We’d like to think we have a good story and we can grow the business nicely. Ultimately, there’s only one pizza, which you can slice up and we obviously had to look after our staff, our current shareholders, and our clients. That left probably around R15m for the general market.

ALEC HOGG: How are you going to justify this kind of rating?

PETER ARMITAGE: Alec, we can’t run a business to try to justify a share price. It doesn’t really matter to us. This is the start of a 20-year dream for us. Well, 20 might be a bit long, but a ten or 15-year dream. As I said at our presentation at the JSE, all we’ve done is made the team. We’re now going out to bat. We have to start putting some runs on the board and all that we can do is carry on doing what we’re doing. It’s amazing what you can do in an energetic, young group of people and we have to carry on, just replicating the formula we’ve created. I think we’ve been very proud of gaining the trust of South Africa’s elite and high net worth individuals. As we perform for them, what we’ve shown is they bring their mates along or they give us more money, and that continues.

However, being listed…the profile and being able to show people what you are, having some cash, and having some shares has already opened up lots of opportunities with people coming to us. We’re primarily sitting in the high nett worth client market and penetrating quite nicely into the financial advisor market where we’re getting some nice support. There are many other legs of this financial services and asset management industry as you get into multi-management, pension funds, and unit trusts.

GUGULETHU MFUPHI: Is that where you want to be?

PETER ARMITAGE: We’ve launched the unit trusts. It’s only about ten percent of our assets. What we’ve learned pretty quickly is you need to have a three-year track record before you get people pushing their money in. One of the things we now have to do is decide… We have to be quite careful at this stage because you have a formula that works and as you move into it, we always go back to the fact that we have an investment process at our core, which is making those investment decisions. Ultimately, the way we view it is that people consume those decisions in different formats. It’s the same with any other portfolio, unit trust, hedge fund, or pension fund but it’s the same decisions and the same disciplined investment process that’s making those calls.

ALEC HOGG: Peter, you’re going to be all over the media tomorrow. Lots of people will be looking at pictures of your face. They’ll look at this new ‘R350m company in three years’ and they’ll ask ‘where does he come from’. Where do you come from?

PETER ARMITAGE: A caravan park in Boksburg. No, I’m exaggerating a bit. I’ve always been in the investment game. I was a stockbroking analyst in Deutsche Bank in ’94 and ran the investment teams…our move to Deutsche Bank and Nedbank. In the asset management space, I decided I wanted to get on the other side of the fence. Instead of advising Coronation and Old Mutual what to do, we wanted to be Old Mutual/Coronation, so I had a five-year plan to work at Investec as an asset manager. It landed up being seven years. Between all of that, there was a two-year period where I had my first go at being an entrepreneur, ran a business called Africam.com, which was another experience. We were trying to be pioneers in something where it was perhaps a little bit too early and we made some mistakes there as well. It’s quite nice to come back. I’ve always had that entrepreneurial spirit in me and it’s nice to come back, and doing it in something that is my expertise. It is what we do and it is our passion.

GUGULETHU MFUPHI: What are the key lessons you learned from your first failure at Africam?

PETER ARMITAGE: We didn’t really have a real business. We were brought on by some quite entrepreneurial shareholders who ultimately wanted to realise value by us listing something. It was a business with R20m of turnover and R1m loss, but at that stage, you can’t even explain to people who weren’t around back then. We had the first draft of a prospectus at $250m, but it was hot air and I always had that feeling of discomfort because it wasn’t real.

To be honest, because I want people investing with us to make money. Obviously, we have to be confident in what we do and if we buy shares now, I’d like to think that they can still make money over three years, but they might lose money over three months.

That’s not what we’re setting out to do. In fact, the ideal thing for a company is if you could choose a share price, it should be a constant multiple of earnings that grows because every time you incentive staff. I’d like to incentivise staff at the right share price, and not at the high share price. It’s about that maturity: today’s lovely, it’s exciting, it’s one of the best days of our lives, and it’s a dream come true but ultimately, we’re not selling shares so it’s just a price on the screen. A share price that’s too high can actually be damaging for a business in the long term.

ALEC HOGG: I remember those days so well. The brilliance of Mark Shuttleworth as you and I very well know from being around on the Internet then, was selling at the right time – selling in January 2000 at the absolute peak of the market.

PETER ARMITAGE: Alec, as I think you remember, the share price that he sold his Verisign shares at went from, I think, $238 to $20 – he got out at the top.

ALEC HOGG: It was an extraordinary bit of good fortune and good fortune to you too, Peter Armitage. You’re back in your (if you like) sweet spot. There aren’t many better analysts than you are in this market and let’s hope that Anchor Capital fulfils all of your dreams and even the people buying it at R3.85 – and that they aren’t disappointed, I guess. They’ll hold on for three or four years.