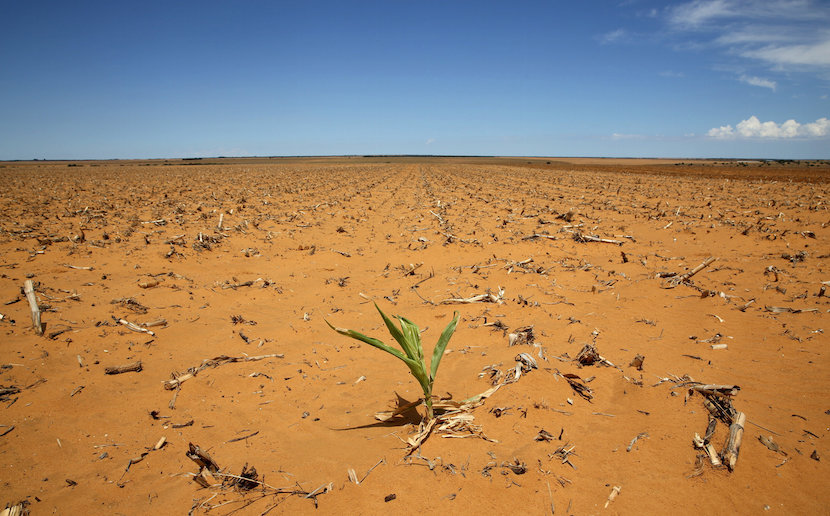 It’s government statements like these which really makes one wonder if the drought has well and truly been swept under the carpet. “We, however, have to contend with drought, which has resulted in losses worth R16 billion across the sector.” Where’s the urgency? And while northern neighbours Zimbabwe declared a State of Emergency, the South African government sits idle. Government says R1 billion has been prioritised and available to farmers through loans but even if the money’s there (reports suggest there’s only R400m), it’s a fraction of the damaged caused already. According to Johannes Wessels, it’s only going to get worse. He looks at the knock on affects of the drought, and we’re not talking about the price of goods and food security. He says it’s likely to fuel the next destructive wave of urbanisation. An interesting read. – Stuart Lowman

The absence of oil well rigs confirmed we were not flying over Libya… Flying to Bloemfontein last weekend the scorched desert-scape below reminded me of the words of a German exchange student who stayed with us in Bloemfontein in 1996 when asked what impression of the Free State she would remember: “The vast stretches of brown with the green patchwork of crops”. This time the red or ash grey extended over vast fields without cultivation broken in isolated places by semi-green irrigation circles clearly showing the ground water is also under threat.

Agri SA and Grain SA have repeatedly asked for the declaration of a State of Emergency and the release of funding to assist commercial and emerging farmers to ride out the drought storm. Warnings have been streaming in from several sides: Food security is under threat.

It is over simplification to equate food security with food self-sufficiency. Singapore has food security but is far from producing within its borders all or most of the food its citizens consume. If South Africa can import food to meet shortfalls in local food production, food security is in place. Rand weakness is a risk for food affordability. Food insecurity is not caused by drought or crop failure: it is caused by bad politics.

Back to the parched earth: no-one seems to realise the systemic implications of the drought on our society.  Culling decimated herds and seeing commercial farmers losing their farms and livelihood are but one (tragic) facet of this crisis. The drought has the potential to cause a tsunami of:

Government interventions to drill boreholes and other emergency propping up of water supply to towns as well as well-intentioned efforts by private sector to get fodder to farmers amount to wall-papering the cracks.  There is a failure to understand the economy is a system and that this crisis requires systemic interventions. Elastoplast approaches will fail.

As pulling a loose thread on one side of a large wall-mounted tapestry will cause distortion and even an unravelling of the tapestry on the other side, the impact of the drought on our economy will not necessarily be the worst on the farms with lost harvests, the shrinking of livestock herds, the bankruptcy of farmers and the shedding of farm labour as everyone is focusing on: The livelihoods of numerous towns (and municipalities) are about to unravel with enormous implications for employment, investment and demands on public expenditure.

The intense and long drought poses three concurrent threats to our small and medium towns:

All those businesses will not only shed labour through closure or down-scaling, their declining expenditure on IT services, stationery, fuel, rates and service payments in the towns will hurt private sector and further threaten the already bleak income streams of several municipalities.

Through a clustering process EOSA can identify the specific towns where the impact of the drought on the enterprise offer in towns has the highest risk. In the case of the Free State towns in Cluster 3 enterprises in the APS sector form 18% or more of the enterprise offer in that town. The towns in that cluster are Bothaville, Viljoenskroon, Hoopstad, Bultfontein, Clocolan, Reddersburg, Petrusburg and Hertzogville. 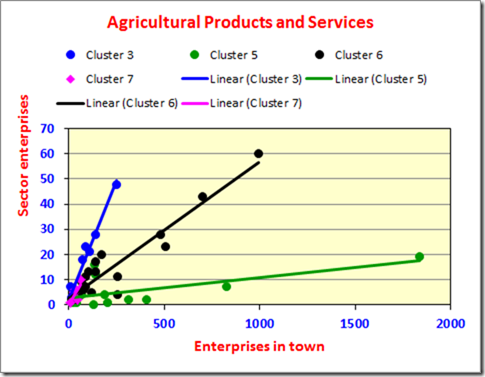 Towns in the Eastern Cape where APS sector enterprises form more than 18% of the total local enterprise offer in the towns are Somerset East, Middelburg, Aberdeen, Hofmeyr, Steynsburg and Jansenville.

A 2014 Monitor Survey of 720 firms in the Free State also indicated that both the APS and Processor enterprises had substantially higher average turnover per firm than the sample average. The next Figure shows that in the case of the APS sector just over 40% of firms had an annual turnover exceeding R20million with Processors having 12.1% of firms in that turnover category. For the whole sample comprising firms of all 19 sectors only 9.5% of firms had an annual turnover exceeding R20 million.

The negative financial impact on the towns will therefore be immense. 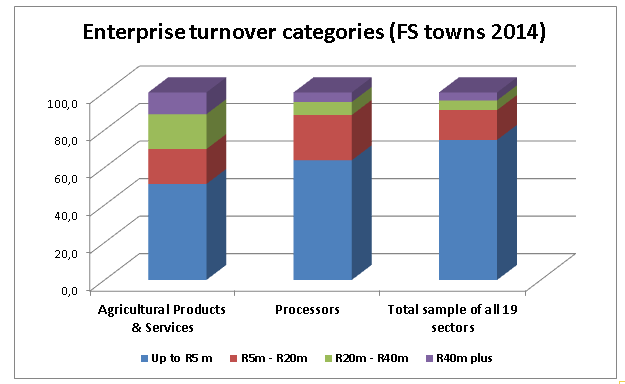 The declining income and prospects in such towns will fuel a next wave of urbanisation increasing the pressure on the larger towns and cities. With a large number of new entrants into the cities and large towns unskilled for the modern sector, the prospects of these incumbents landing more than the occasional piece job are grim.

The drought in all likelihood will yield a bumper harvest of growing informal settlements, a substantial increase in demand for social grants and undermine the economic livelihood of a large range of towns and municipalities.