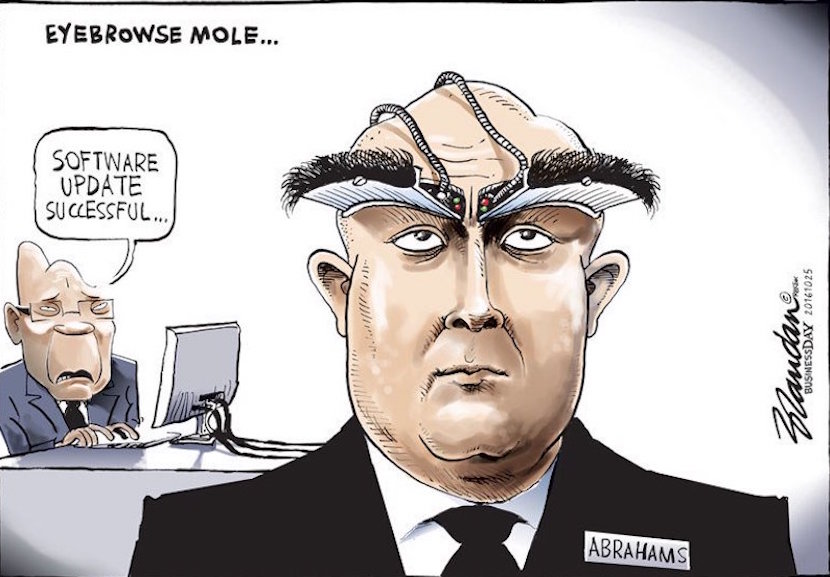 National Prosecuting Authority boss Shaun Abrahams has shrugged off a national outcry against a move to build a crime case against Finance Minister Pravin Gordhan. The case has been sharply criticised by legal experts and others as nothing more than a political manouevre to wrestle control of the National Treasury and finance ministry from Gordhan as President Jacob Zuma instals allies in influential positions at key state organisations. Gordhan is seen as the super-hero in a political battle that is being waged over widespread corruption and state capture. Zuma, his family and friends – in particular the rich Gupta family – are at the centre of the country’s worst financial scandal in decades, with allegations that the Gupta family has tried to bribe politicians to sway decisions in exchange for being awarded senior posts and massive sums of money. Gordhan has proved a major source of frustration for the Gupta family, after he rejected a request to pull strings to get banks to do business with their company, Oakbay Investments. Dozens of irregular transactions have been reported to the Financial Intelligence Centre, which investigates money-laundering. South Africans, meanwhile, have come out in strong support for Gordhan, with the leaders of corporations putting their names to public appeals for the authorities to back off Gordhan. Next week, thousands of people are planning to join protest marches to signal their unhappiness about Gordhan being hauled into court on spurious charges. Abrahams and his team, meanwhile, are looking under every stone for dirt on Gordhan. – Jackie Cameron

Cape Town – Nine days after announcing that Finance Minister Pravin Gordhan would be charged with fraud, the National Prosecuting Authority (NPA) issued a subpoena to the CEO of the Government Pensions Administration Agency to provide documents that explain the approval of requests for early retirement.

This was revealed in an explosive supplementary affidavit filed at the North Gauteng High Court on Wednesday by Helen Suzman Foundation (HSF) director Francis Antonie. The HSF and Freedom Under Law are asking the court to set aside the charges against Gordhan.

“The timing suggests a desperate, eleventh-hour attempt to prop up a prosecution that, clearly, was hopeless from the start. This is information the NPA should have gathered long before any decision to prosecute was made, and the NPA’s failure to do so underlines the irrationality and unlawfulness of its decision. This is especially so given that the information is likely to be exculpatory,” the HSF said in a media statement.

Gordhan is charged with fraud for approving the payment of an early pension to the former deputy commissioner of Sars, Ivan Pillay. He is scheduled to appear in court on November 2. – News24

Durban – As support for Finance Minister Pravin Gordhan grows in KwaZulu-Natal, a number of events have been planned to support him at his court appearance next week.

The three face a charge of fraud relating to Pillay’s being granted early retirement in 2010. He was subsequently rehired as a consultant. They are due to appear in the Pretoria Regional Court on November 2.

By simply walking into Luthuli House to meet with Zuma, #ShaunAbrahams has done irreparable damage to the rule of law in SA. He has to go.

Pillay said the ACM would peacefully demonstrate at Gugu Dlamini Park in the Durban city centre on the day. ACM hosted a peaceful protest in Westville, Durban, on Monday that received positive support, Pillay said.

“We have a whole host of events leading up to the court case next week. And it is not just us, there is support in Johannesburg and Pretoria as well. Many are saying this witch hunt for Pravin is uncalled for.”

A public meeting was being held on Wednesday evening to drum up more support.

“What we are trying to do is tell the rank and file community members that our country is in disarray and we need their support to change things. We all have to get involved.”

Pillay urged the public to take an active interest in politics. President Jacob Zuma was attacking Gordhan, he said.

Under daily attack from Zuma & the Rent-seekers, Gordhan remains a rock of stability & strength. The man Shaun Abrahams wants to criminalise

“We have to think about the future of our country. Many morally-minded people have called the charges against these people trumped-up and we can see why.”

Pillay praised Gordhan for being an individual with integrity and a “high moral compass”.

He said NPA head Shaun Abrahams, who announced the decision that Gordhan would be charged, was getting instructions from Zuma.

Pillay said that, while prominent activists acknowledged Zuma’s contribution to the liberation struggle, many felt he was not doing a good job. – News24