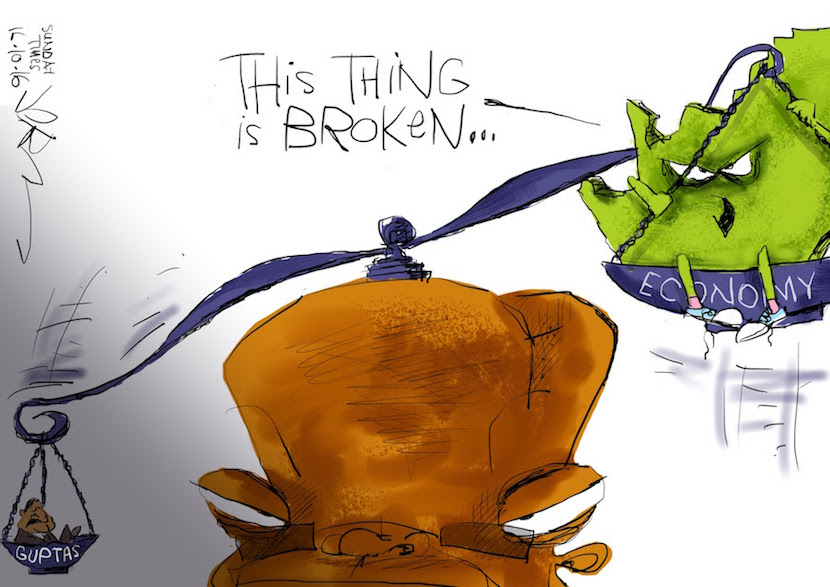 South Africans have become accustomed to heaving a collective sigh of relief as ratings agencies continue to stave off a ratings downgrade. But, South Africa’s ratings have moved close to sub-investment grade with President Jacob Zuma at the helm, as the graphs below indicate. The rand’s value has declined steadily, too, with a few shock falls reflecting unexpected political developments. A sharp rise in unemployment and steadily declining economic growth over the past five years add to a picture that confirms that Zuma has been very, very bad for South Africa – if you judge his performance on whether most people are better off. Zuma’s friends, on the other hand, have done very well for themselves. This was highlighted when Ajay Gupta appeared in the ranks of the country’s wealthiest, shooting from nowhere to join the super-rich. The Sunday Times estimates he is South Africa’s seventh-richest person and the country’s top black billionaire. The Gupta family have featured in a report on state capture – essentially a strategy by politicians and their friends to get their hands on state assets through business deals. These charts make a laughing stock of the once-respected senior figures in the ANC who have propped up Zuma and allowed him to continue running the country into the ground. Is it any wonder Zuma is expecting dissent? – Jackie Cameron

Bloomberg – South African President Jacob Zuma will need to confront more than opposition lawmakers disrupting his annual speech at the opening of parliament as he seeks to reassure the nation the economy has turned a corner.

Zuma, who has survived five bids by opposition legislators to force him from office since he took the job in 2009, is scheduled to address the National Assembly at 7 p.m. in Cape Town on Thursday. Zuma has ordered the army to be deployed to “maintain law and order” for the opening of parliament, and the third-biggest party, the Economic Freedom Fighters, is expected to obstruct proceedings, as its members did in 2016.

The speech comes at a time when unemployment is at the highest in 13 years, economic growth last year was the slowest since a recession in 2009, and the country is struggling to retain its investment-grade credit rating. 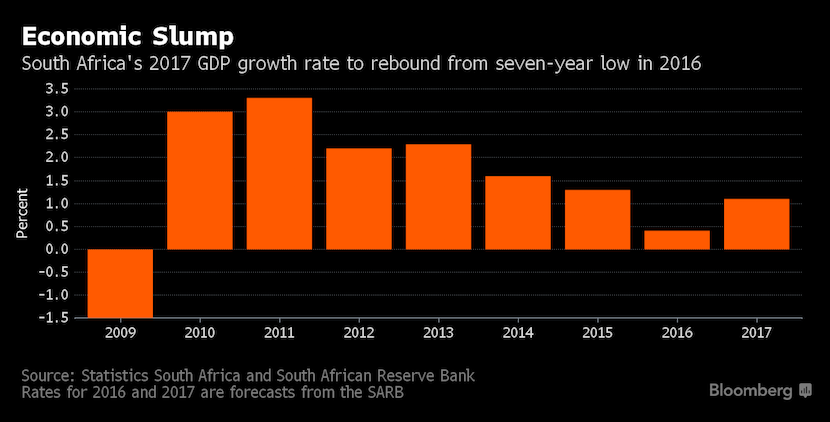 Economic growth probably slowed to 0.4 percent last year, according to central bank estimates. This was due to a drought, weak demand from the nation’s main export partners and low commodity prices. Political infighting in Africa’s most-industrialised economy, including a police investigation into Finance Minister Pravin Gordhan, has also cast a shadow over the state’s efforts to boost confidence and growth.

While the Reserve Bank said on Jan. 24 the rate of expansion will probably accelerate to 1.1 percent this year, political uncertainty remains a risk to the economy, said Iraj Abedian, chief executive officer at Pan-African Investments and Research Services in Johannesburg.

Zuma “is at the centre of it,” Abedian said by phone on Feb. 7. “Growth at the moment is primarily affected by the fear of political meltdown and an open battle between himself and the finance minister.”

Zuma and Gordhan, who will present his budget on Feb. 22, have been at loggerheads since his reappointment to the Treasury in 2015, disagreeing about how the tax-collection agency is managed and over Zuma’s nuclear-power expansion plans, which Gordhan says the country may not be able to afford. This, and a police investigation into Gordhan for allegedly overseeing the setting up of a spy unit at the tax agency during his time as its commissioner, hurt the rand. The local currency plunged more than 3 percent against the dollar on the day Gordhan was summoned to appear in court on fraud charges. 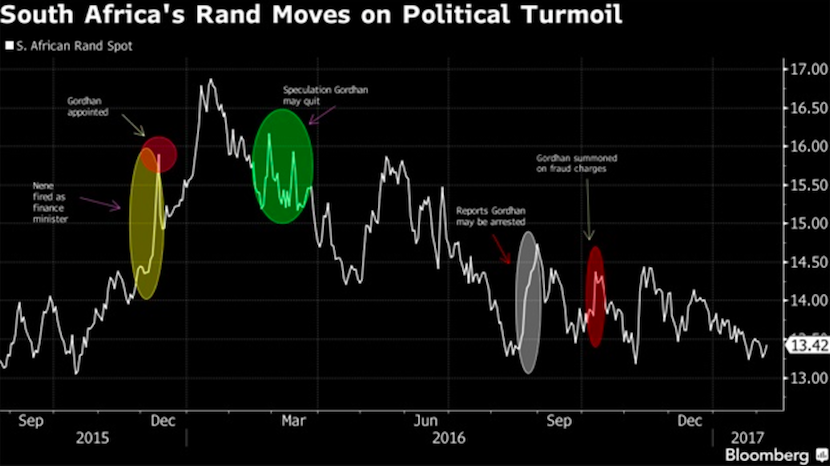 “It’s a bit of tug of war at the moment, because the rand’s fundamentals are looking quite positive, but you do have political risk,” Russell Lamberti, a chief strategist at ETM Investment Services in Cape Town, said by phone. “There is risk that the rand falls off with some bad political decision, but I think those will be short-lived.”

Unemployment in South Africa increased to 27.1 percent in the quarter through September, the highest since 2003, according to data from the International Monetary Fund. Thirty-eight percent of people between 15 and 34 are unemployed, according to statistics agency data, highlighting the economy’s skills shortage while poverty levels and anger over rising tuition costs have led to violent protests by students. 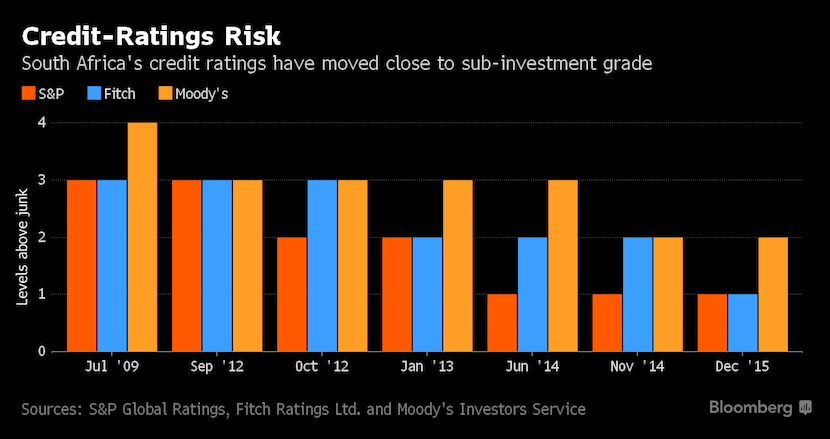 “There is very little inspiring businesses to hire in the current economy and the lack of policy stability is not helping either,” Azar Jammine, chief economist at Econometrix in Johannesburg, said by phone.

Slow economic growth and political infighting are some of the key factors rating companies have highlighted as risks to South Africa’s investment-grade credit rating. While S&P Global Ratings and Fitch Ratings Ltd. kept their assessments of the nation’s foreign-currency debt at one level above junk late last year, and Moody’s Investors Service’s assessment is one step higher, there is still a chance that South Africa’s debt will be downgraded this year, according to ETM’s Lamberti.

“The downgrade is tied to how bad the politics and political decisions could be,” Lamberti said. “The story with the ratings agencies isn’t really going to change.” 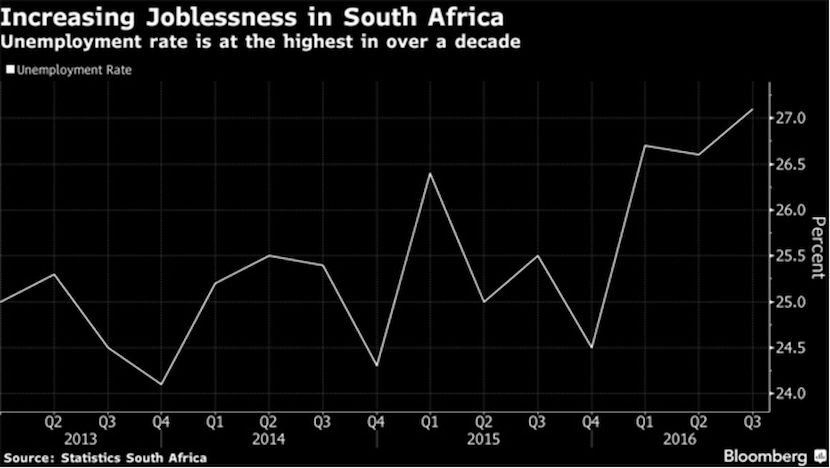