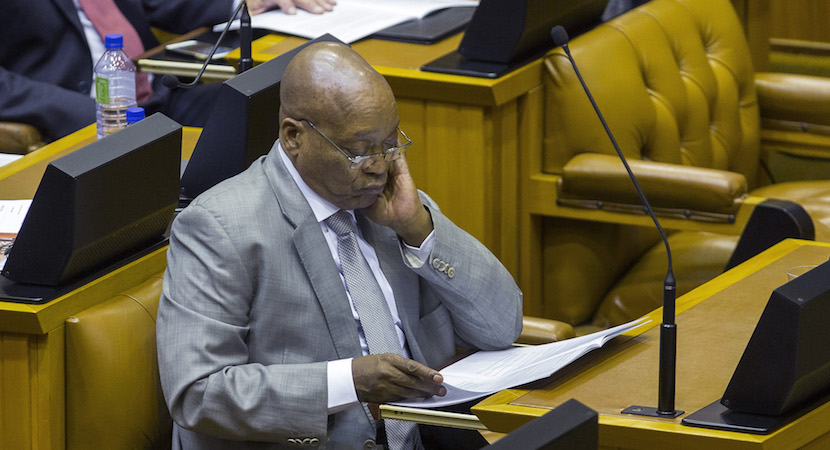 President Jacob Zuma has reiterated calls to grab land from white people without compensation, indicating that changing the Constitution will make radical economic transformation possible. While much of this might be hot air and political rhetoric aimed at drumming up support among the downtrodden masses, Zuma is sounding a lot like the Economic Freedom Fighters’ Julius Malema or Zimbabwe’s Robert Mugabe. The unfortunate results of land grabs are clear to see: north of the border, Zimbabwean citizens are starving, families have been ripped apart as a diaspora has scattered around the world in search of jobs and the country is on the brink of civil war. But Mugabe, his family and friends are doing just fine, with funds stashed in low-tax countries and luxury lifestyles on display amid the poverty back home. There is little stopping Zuma from getting his way. Nowhere is this more evident than the ANC appointment of disgraced former Eskom CEO Brian Molefe as an MP. Or the flagrant disregard for the explosive details about corruption and financial irregularity in the last public protector’s report. Zuma does what Zuma likes. Expect him to push hard on land reform as he fights to maintain support and in so doing help to keep his friends and associates in the styles to which they have become accustomed. In the meantime, Zuma’s comments about taking land will fuel negativity among investors and business players. With uncertainty over property rights, they will inevitably look at their options elsewhere. – Jackie Cameron

Cape Town – President Jacob Zuma reiterated that there are weaknesses in South Africa’s willing-buyer, willing-seller principle which delay land reforms and that land restitution without compensation is under way.

Addressing the official opening of the House of Traditional Leaders at Parliament on Friday, he said the willing-buyer, willing-seller situation causes the state to be a price taker in an unfair process.

“In addition, there are too many laws dealing with land reform, which cause confusion and delays,” Zuma said.

“The fact remains that land hunger is real. This is not surprising as this was the fundamental question at the centre of the liberation struggle.”

Zuma said government is considering two actions to attain the goal of radical socio-economic transformation in relation to land reform.

First of all, a pre-colonial audit of land ownership, use and occupation patterns should be undertaken. Once the audit has been completed, a single law should be developed to address the issue of land restitution without compensation.

“The necessary constitutional amendments would then be undertaken to implement this process.”

Secondly, government is considering the redesign and establishment of the National Land Claims Commission as a Chapter 9 institution, so that it has the necessary powers to help government reverse “this historical injustice”. This would also require a Constitutional amendment.

“All of this will require unity and common purpose and action in the country, to ensure redress and meaningful reconciliation.”

President Zuma states that the current Constitutional provisions are a hindrance to meaningful land reform.

Zuma emphasised that government and the ruling party would want to ensure that the land reform process is an “orderly” one.

“We do not support chaos and illegal land grabs. Actions must be informed by the Constitution and the laws of the land. In the meantime, land reform continues on the basis of existing laws.”

Zuma also said the fact that 2017 is the year of radical economic transformation means it’s time for action.

“The ANC and government have produced enough policy documents and bills. Now is the time for action and not talking, writing or analysing.”

Zuma appealed to the House of Traditional Leaders, which is celebrating its 20 years of existence, to join government on its journey of bringing fundamental change in the structure, systems and institutions and overhauling patterns of ownership and management in the economy.

“Access to economic power is a key grievance of our people at this stage of our liberation,” Zuma said.

He said he’ll receive regular feedback from ministers and deputy ministers, and what exactly they are doing to ensure radical socio-economic transformation in their departments to ensure the empowerment of black people, and Africans in particular.

“We urge our traditional leaders to use this opportunity to bring about economic stability and cultural development in rural areas,” Zuma said. – Fin24