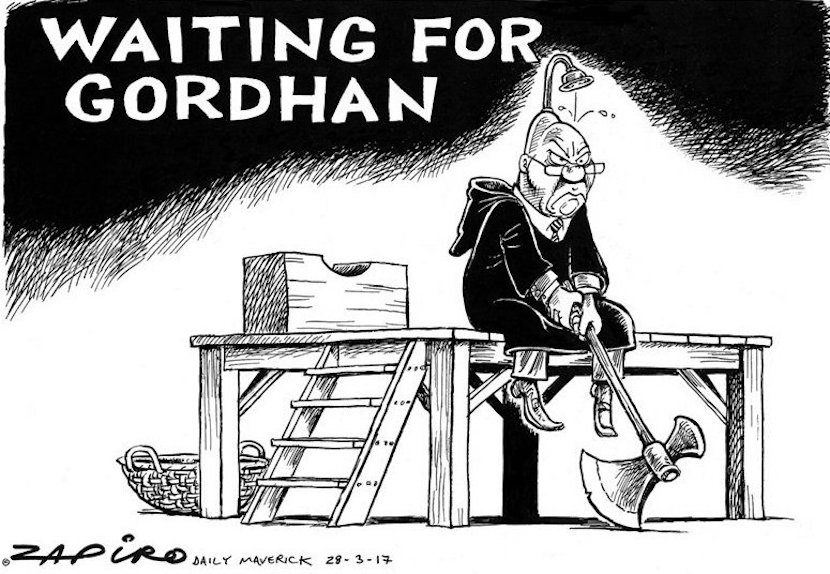 In this analysis, couched in the civilised, respectful language of Azar Jammine, the Econometrix Chief, we’re given the in-depth reasoning behind just why a cabinet reshuffle, which could include the sacking of the Finance Ministry duo, will cause such long-term economic damage to our country. While outlining the consequences, Jammine, explains just how the damage will occur and increase, depending on how far Zuma goes with his unbridled ambitions to take control of every lever of power and wealth possible. This adds value to those of us who just accept that the pack of cards so carefully stacked in our favour until now, will simply collapse. We get both a local and international view, depending on just what Zuma does to please his Zuptoid minions and their capturing crony Capitalists. Isn’t it funny?; we so quickly forget how we were introduced to the Zuma Presidency, via his “mutually beneficial symbiosis” with shady chief financial advisor and subsequently convicted arms-deal fraudster, Schabir Shaik. Shaik got 15 years, but served little of it, released on highly suspect compassionate grounds due to reportedly ill health. Arms Deal Inquiry Commission findings and Shaik, with Zuma pivotal. Now we have State Capture Inquiry findings and the Gupta’s, with Zuma pivotal. How loud does the drum have to beat before we listen to its call? – Chris Bateman

The 5% depreciation of the Rand over the past 24 hours in the wake of President Zuma’s instruction to the National Treasury delegation to the UK and US to woo investors, is not surprising in the least. On the contrary, one would have thought that the Rand might have depreciated by even more than it has done. The move has once again heightened fears of State capture of the National Treasury by parties closely connected to the President who appear to be driven to gain better access to undertaking important deals which might benefit their own pockets through the redirection of State finances to such ends. Two main, yet not unconnected, alternative reasons can be put forward for the decision. The first is that it represents a precursor to a Cabinet reshuffle which sees the replacement of Minister of Finance Pravin Gordhan and his Deputy Mcebisi Jonas by officials more pliant towards the redirection of Treasury funds to the enrichment of the well-connected elite. The second alternative reason is to force Gordhan to attend the court hearing aimed at providing him with a declaratory order not to allow the Finance Ministry to become embroiled in legal action between commercial banks and the Gupta family’s Oakbay Investments. The cutting off of credit lines by South Africa’s leading commercial banks to Oakbay encouraged them to ask for intervention by the Finance Minister to overrule the banks, an action which he has resisted and is doing more forcefully by attempting to issue a declaratory order preventing the Ministry from getting involved in the issue. Either way, these developments are seen as an attempt by the connected few to pave the way for access to State funds without being blocked in doing so by the current leadership of the Treasury.

Difficult to sustain confidence with other leadership replacements In Treasury

One of the questions that is bound to be posed is whether or not a replacement for Finance Minister Pravin Gordhan will necessarily result in a loss of confidence in Treasury. In particular, the name of Brian Molefe, the former Eskom CEO, who has recently been appointed Member of Parliament, is put forward as a capable potential candidate to head up the Finance Ministry. The problem with him and most other potential appointees to the position is that they will be seen as being captured by interested parties and will not be able to act in an independent fashion. Only the likes of Gordhan’s Deputy Jonas, or Science and Technology Minister Naledi Pandor, with proven resistance to notions of State capture and the enrichment of the few, will be acceptable enough to lay aside the fear of State capture.

Damage to prospects of reduced inflation and lower interest rates

There are a number of ways in which these latest developments threaten to scupper the mild improvement foreseen in economic growth over the next few years. Arguably, the short-term effects will be less pronounced than the longer-term ones. To the extent that credit ratings agencies might take fright from these developments as presaging a potential impediment to the government’s ability to reduce the rising trend its public debt over the past seven years, they might be inclined to want to downgrade the country’s credit rating. In the case of Standard and Poor’s, that would mean taking South Africa’s credit rating down to sub-investment grade (commonly known as junk) status. The cessation or reversal of capital inflows implied by such a move would cause the Rand to lose further ground, possibly very heavily. Inflationary pressures, which of late appeared to have been tempered mainly by the Rand’s recent appreciation, would resurrect themselves. In our Ecobulletin yesterday previewing the decision on interest rates likely to be taken at the MPC meeting currently underway, we suggested that the manner in which the Rand had strengthened and inflationary pressures were receding, raised the possibility of an interest rate reduction for the first time in almost five years. At the same time, we suggested that the Reserve Bank would be reticent to take such a decision for fear of a fall in the Rand due to either a rise in US interest rates or domestic political turmoil. In the event, a few hours later the latter resurrected its head, dashing any faint hopes that might have existed of interest rate relief in the short term. On the contrary, should the Rand lose far more ground, the spectre of higher rather than lower interest rates, would return. Either way, the fact that inflation and interest rates might now not decline to the extent anticipated implies that hope for some stimulus for higher economic growth over the next couple of years, has been dealt a blow.

Biggest blow is to potential capital investment and through this, higher sustainable growth

However, probably the bigger blow to the economy is the longer-term implication of the latest development for capital investment prospects. Cancellation of a major roadshow of this nature aimed at wooing international investors, is bound to reduce the alacrity with which international investors will commit to South Africa. In their minds it also heightens the reality of the political turmoil in the ruling party and the damage that this is inflicting on domestic business confidence. It also scuppers attempts made over the past year by National Treasury to forge a working relationship between the business sector and the public sector to help promote higher economic growth through addressing key structural weaknesses in the economy. What was noticeable about the 0.3% GDP growth recorded in 2016 was that whatever growth occurred was attributable to household and government consumption expenditure and an improvement in the country’s terms of trade. Private consumption expenditure increased by 0.8%, government consumption expenditure by 2.0%, whilst the decline in exports of -0.1%, was far less pronounced than the -3.7% decline in imports. Had these indicators been the sole contributors towards economic growth, South Africa’s growth would have exceeded 1%. What dragged domestic growth downwards was the fact that growth in fixed capital formation plunged by -3.9%. Arguably the most important reason for this underperformance in capital investment was the uncertainty created by the political environment and the resultant loss of business confidence which this brought about. In the longer term, the decline in fixed capital formation simply restricts the potential growth rate of the economy still further. Capital investment is needed to sustain the provision of goods and services in the longer term. The additional damage inflicted on business confidence by yesterday’s developments is likely to hamper capital investment still further, eroding even more the country’s ability to increase its longer-term growth potential. Furthermore, credit ratings agencies themselves profess that they are looking at the success or otherwise of South Africa in lifting its longer-term economic growth rate as a means of generating higher growth in tax revenues necessary for bringing down the budget deficit and limiting the rise in the public debt. Yesterday’s events clearly damage prospects of sustaining the country’s investment grade credit rating on these grounds too.

What is not fully appreciated by President Zuma regarding the effects of these actions is the fact that the 50 basis point rise in long-term interest rates over the past 24 hours on its own will add around R14bn to the government’s debt servicing requirements over the coming year, based on the projected R254.4bn public sector borrowing requirement for 2017/18. This is a huge amount that draws funding away from other vital areas of social expenditure, many of which are encapsulated in the phrase “radical economic transformation” which is one of the key policy objectives of the current government. In other words, by reacting in the manner in which he did, Zuma is impairing the government’s ability to carry out its own policies to improve the lot of the poor. The tragedy is that the perception will exist that the poor stand to lose in order to enrich a connected few. From a financial point of view, we are inclined to stick with our present exchange-rate forecast which sees the Rand ending the year at just over R14 to the Dollar.