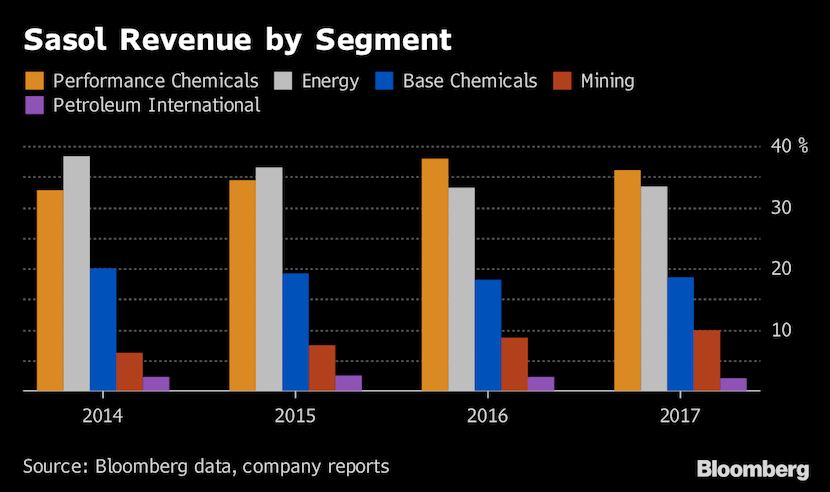 EDINBURGH — The Ramaphoria sweeping South Africa has helped improve investor and business confidence, but not enough for corporate giants like Sasol to look elsewhere for opportunities to boost revenues. The South African economy has been under pressure for some time, shrinking under a corrupt government that has failed to reverse a high and continually rising unemployment rate. Sasol has had the added challenge of operating in the oil industry, which has been knocked by lower crude prices. Its CEOs have unveiled a diversification and growth strategy that will reduce Sasol’s reliance on its South African operations and also enable it to take advantage of the expected strong demand for chemicals. Sasol shareholders can look forward to higher dividends in due course as executives work on reducing the company’s debt-to-equity ratio. – Jackie Cameron

Bloomberg – Sasol Ltd. built its business making fuel from coal, shielding apartheid-era South Africa from sanctions. This year, the start-up of a huge new ethylene plant in Louisiana will complete the group’s conversion into a global chemicals player.

The $11 billion Lake Charles project will catapult Sasol’s chemicals revenue to more than 70 percent of the company’s total once fully up and running, and the share is likely to get even bigger over time, co-Chief Executive Officers Bongani Nqwababa and Steve Cornell said in an interview this week at Bloomberg’s Johannesburg offices.

While the group is still looking to expand the number of gas stations it operates in its home market and boost natural gas output in Mozambique, the best international growth opportunities are in specialty chemicals, which are used in products from cosmetics to hardware, Cornell said. Trends from population growth to urbanization will support strong demand for plastics and chemicals into the future, while oil-consumption growth may be limited beyond 2030, he said.

“Our energy business is mainly Southern Africa, but our chemicals business is global,” Cornell said. “Progressively over time we’ll be more and more chemicals oriented. We’ve got a great base here in our fuels business and we’re going to continue to grow that, but globally you’ve got more opportunity on the chemicals side.”

While Sasol’s operational mix is changing, virtually all corners of the business will continue to be linked to crude prices. The company cut costs and took measures to save cash during the three-year oil price slump, including shelving a $14 billion gas-to-liquids plant also planned in Louisiana.

Sasol reported revenue of R172 billion ($14 billion) in the year through June 2017 and currently has a market value of about $23 billion. Once Lake Charles is fully operational, the company’s geographic revenue will be evenly split between South Africa and the rest of the world, Nqwababa said.

Lake Charles will produce base chemicals – used to make packaging, bottles and footwear as well as solvents, explosives and fertilisers – as well as specialty chemicals, which have more specific applications and are in high demand. The company’s planned specialty output from Lake Charles is already close to being sold out, Cornell said.

Sasol anticipates $1 billion a year in revenue from the project, after all units are producing by 2020, and about $1.3 billion the following year. More investment is set to follow.

Sasol rose 1.9 percent by 9:46 a.m. in Johannesburg. The stock has gained more than 6 percent this year, alongside a steady climb by crude oil.

The energy sector in South Africa still holds investment opportunities for Sasol. The company wants to almost double its 11 percent retail market share to more closely match the 30 percent of fuel production that it accounts for in the country. It’s not the only one, as Total SA also expects to expand its own service stations.

Retail margins “are quite decent” at present and Sasol’s plans could eventually include charging stations for electric vehicles, Nqwababa said.

One potential challenge in South Africa is the prospect of new clean-fuel regulations and what they would mean for the country’s refining industry, Nqwababa said.

“We are developing alternative strategies as to how we respond to that,” he said. Sasol is studying the possibility of increasing output at its synthetic fuel operations in Secunda, as well as considering options for the Natref refinery — co-owned with Total — which would struggle under stricter regulations, Nqwababa said. The results of both studies are expected by November.

Once Lake Charles is completed, Sasol will seek to boost its dividend payout and reduce borrowings. The U.S. project has brought the company’s debt-to-equity ratio to 39 percent, which it would like to reduce to about 30 percent, according to Cornell.

“There will more than likely be a pause on any big growth projects for a few years as we try to bring that down.”