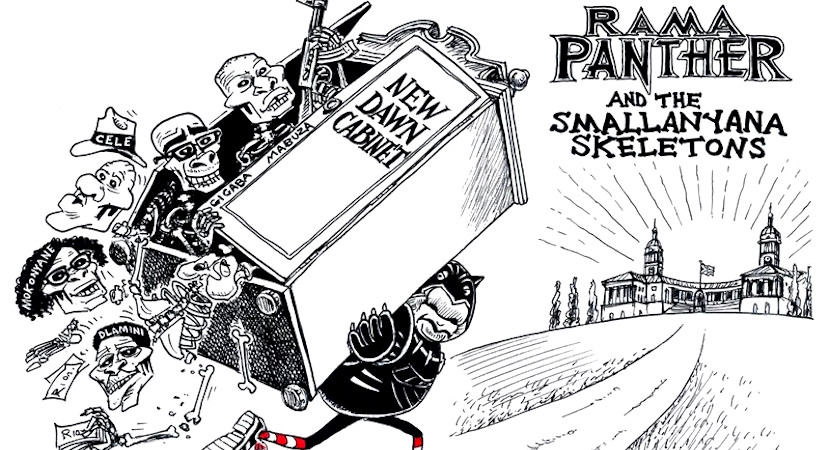 JOHANNESBURG — The rise of Cyril Ramaphosa to the top post within the ANC would have left many feeling more optimistic about the country. But unfortunately as the months have dragged on, it appears he’s simply polished a turd and things are turning for the worst. From a policy standpoint, the ANC’s stance on its new mining charter, architected by none other than the rambling Gwede Mantashe, is threatening court action from industry again. Meanwhile, as time progresses, it’s becoming more clear from growing voices within the ANC that it is actually intent on expropriating land as soon as it can – a rushed approach that risks destabilising the entire economy. My thoughts then go back to when Ramaphosa spoke of promised reform and greater ease of doing business in South Africa while he was at the World Economic Forum in Davos earlier this year. I, like many, believed his promises and conviction. But in the last few months, I’ve started to feel hoodwinked as the ANC looks to be a beast that is beyond his control. This below piece is published courtesy of Politicsweb. – Gareth van Zyl

Earlier this month a former finance minister, Trevor Manuel, said it would take more than a decade for the economy to recover from the destruction left by state capture. When he became finance minister in 1996,”none of the state-owned companies were dependent on handouts from the state.” Now, however, the contingent liabilities of these companies were among the biggest on the national balance sheet.

Hardly a day goes by without yet another report of failure at some or other provincial or national department, local authority, or other government agency. “State capture” is not the only reason for all the failures the African National Congress (ANC) has inflicted on this country. Reckless implementation of “transformation“, including enforcement of the ideology of demographic “representivity”, has made its contribution. So have growing corruption and declining accountability, never mind the cadre deployment policy.

If Mr Manuel thinks it would take a decade for the economy to recover from the damage already done, it would be interesting to know how much longer he thinks it might take for the economy to recover from the damage yet to be done. Top of the list of such damage is the ANC’s emphatic decision to empower the government to confiscate private property, the Constitution to be amended if necessary. Although much of the public debate on this issue has focused on land, all kinds of property would be at risk, as the IRR has repeatedly pointed out.

Also high on the list of damage yet to be done is the latest version of the mining charter, published last weekend. Although the IRR and others have pointed out that in some respects it is an improvement on last year’s version, implementation will inflict further harm on the mining industry. The onerous racial requirements attached to procurement will simply push up costs that the industry is battling to contain. Among other things, mining companies will be expected to create and sustain a whole range of black industrialists and other suppliers.

The onerous ownership and licensing requirements will almost certainly ensure that very little of the R122 billion in greenfields investment that the industry was hoping to be able to undertake in the next few years will materialise.

Having already shifted the goalposts by requiring 30% instead of 26% black ownership, the ANC is almost certain to shift them again at some future date.

Lack of new investment in mining will compound the damage that has already been inflicted on all the companies that supply the mining sector, among them construction companies. A major construction company, Basil Read, recently applied for business rescue, partly because of the slowdown of mining (and government) contracting. Said the Master Builders Association, “If we lose our big construction companies, we lose not only many jobs but also our national capacity to build the infrastructure a growing economy needs.”

Cyril Ramaphosa and his colleagues have their hands full in trying to fix Eskom, SAA, the South African Revenue Service, the South African Bureau of Standards, the railways, local government, public hospitals, the state security services, and all the other entities that the ANC has ruined or brought to the brink of collapse. It makes no sense to extend the hand of state destruction even further into the private sector.

Why then do it? Perhaps, with regard to mining, the intention is to chase away the major companies that have not already left South Africa. Either black companies or a state mining company would then be able to take over their assets at giveaway prices. Since mining development and colonialism supposedly went hand-in-hand, getting rid of major mining companies would also be consistent with the continuing crusade against “colonialism” and “white monopoly capitalism” and implementation of the national democratic revolution.

Even though President Ramaphosa is sometimes portrayed as a great reformer of the kind who will remove constraints upon economic growth, he has repeatedly stated his commitment to “accelerated and fundamental transformation” of the mining industry. The latest version of the mining charter makes it clear that his supposed “new dawn” is a false one.