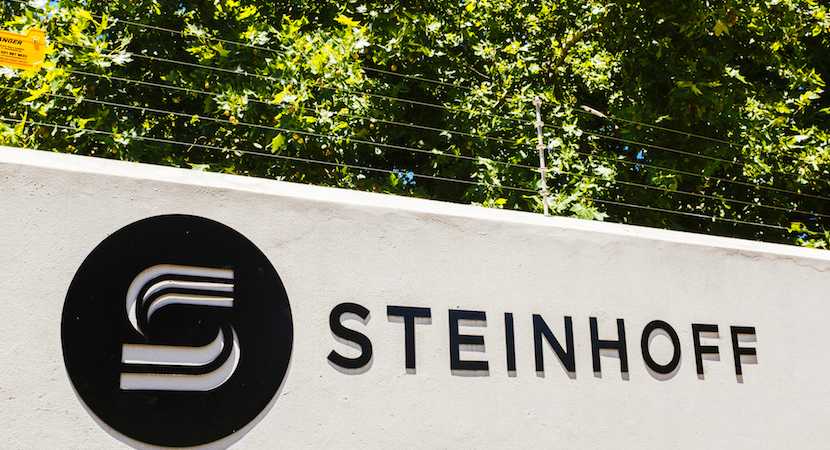 When the Steinhoff share price crashed in late 2017, its demise shattered portfolios across South Africa’s investment landscape. Yet, many global investors knew the multinational retailer’s stock price was about to plummet. According to respected stock analyst Ryk de Klerk, not far off half of Steinhoff’s Johannesburg shares and more than a quarter of its Frankfurt shares were on loan to short sellers – and then Markus Jooste resigned as CEO. While Jooste’s departure came as it emerged that German authorities were investigating financial irregularities, there may have been another reason that the former golden boy of horse racing and the retail trade jumped ship. De Klerk questions whether Jooste felt compelled to terminate his employment to avoid trading in insolvent circumstances. He adds the caveat that the whole Steinhoff saga remains murky and could easily form the foundation of more than one business studies PhD thesis. Still, De Klerk’s analysis makes for fascinating reading and serves as a reminder that investors should not assume that big multinationals are too big to fail. The article was first published in Business Report. – Jackie Cameron

Steinhoff: You cannot fool the market… at least not all the time!

On 24 October 2017 Steinhoff repurchased 78.4 million Steinhoff shares at R61.40 per share or 3.73 euros per share at the prevailing exchange rates. It surely smacks of a put option (the right to sell shares at a given price) that was exercised against Steinhoff or one of its special purpose entities.

Was it an option that was part of the PIC-backed Lancaster 101’s purchase of Steinhoff shares from Steinhoff itself? What we know is that Paul Magula, previous Executive Head: Risk and Compliance at the PIC said in his statement before the PIC Commission: “Yes, (it took) just five months from investment decision to impair up to R5bn of credit investment.” We also know that in the process the PIC partially passed on its security put in place to Citibank by subordinating security at no cost. Even with the share worth virtually nothing, it means that Lancaster/PIC’s value in Steinhoff was probably preserved by R4bn or more.

Whatever the reason maybe, the repurchase of the 78.4 million shares put Steinhoff’s cash position under severe strain as the sum paid was nearly 10% of the group’s originally stated cash and cash equivalents at the halfway stage in the 2017 financial year. Or, put differently, equal to more than 40% of the cash and cash equivalents at the end of the 2017 financial year as reported in the 2017 Annual Report – therefore after all the restatements and adjustments.

Was this the reason behind Markus Jooste’s resignation? From the date of repurchasing the 78.4 million Steinhoff shares up to the close of the market the night before Jooste resigned, the impairment was already around R780m and the outlook was grim.

I quote from a piece that I wrote in 2017: “On 7 December (2017) The Wall Street Journal reported that before the previous day’s announcement of the admission of accounting irregularities and the subsequent resignation of CEO Markus Jooste a staggering ‘40 percent of Steinhoff’s Johannesburg-listed shares and more than a quarter of its Frankfurt-listed shares were on loan to investors betting that the share price would fall, according to IHS Markit’.”

Steinhoff therefore faced a serious liquidity problem. Jooste did the right thing to bite the bullet to prevent being accused of trading in insolvent circumstances which is probably a criminal offence.

I do not think that Jooste would have been so daft to try to take on the market by buying the 78.4 million shares in order to clean out an overhang in the market.

Who was behind the re-rating of a non-exceptional company?

Before Steinhoff’s implosion in the final quarter of 2017 and long before the company’s actual financial position came to light, the only information available to the investment fraternity were the financial results for the previous years.

My analysis indicates that the company was not of high quality at all. The return on capital employed, a very good measure of profitability and the efficiency of the capital employed, indicated that the returns and efficiencies of Steinhoff was about half of the aggregate of the listed industrial companies as measured by Iress’ Financial Analysis System (FAS) in South Africa from 2009 until the first 6 months of the 2017 financial year annualised.

From 2009 to November 2013 the relatively weak quality was reflected in the company’s valuation trading at a discount of between 50% and 65% based on the trailing price-to-earnings ratio relative to the market as measured by the FTSE/JSE Industrial Index. The company’s discount began to narrow steadily through end-2014 but within 9 weeks from the first week in February 2015, Steinhoff’s trailing price-to-earnings (PE) ratio drew level with the market from a discount of 33%. 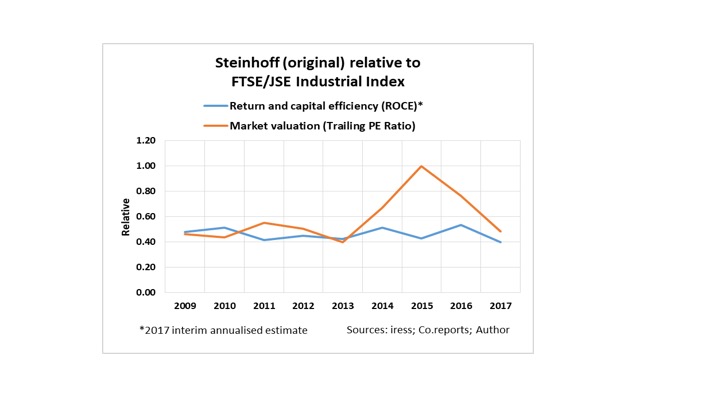 It could be that the re-rating of the share was in anticipation of the company moving its primary listing to Frankfurt later that year. But were other strange market forces behind the re-rating? According to a SENS announcement on 2 October 2015, Steinhoff, through special purpose entities, bought 150.7 million of its own shares for €758m at €5.0299 per share, equal to R76.526 per share at an exchange rate of R15.2143 per euro. At that stage the share price was trading at a premium of more than 5% to the market based on trailing PE metrics. The shares were held and classified as treasury shares for the purpose of IFRS.

The big question should be – where did those shares come from? From the SENS announcement by the company on that day it appears it was all in one go. Or was it? Were those shares accumulated over time for eventual book-over and then delivered to the special purpose entities, or were the shares borrowed by another party from some financial institutions and sold to Steinhoff as a result of a major short position taken by somebody?

The investors who took up the bond issue on 30 July 2015 were probably the short-sellers of the Steinhoff shares. The seven-year convertible bonds were convertible into 150 million Steinhoff shares at an initial conversion price of €7.44 per share – a 35% premium to prevailing share price at the time – €5.51 per share. The seeds for short-sellers were sown as Steinhoff was an ordinary company trading at lofty ratings. Steinhoff was obviously desperate for the €1.1bn (before expenses) raised from the bond issue.

Steinhoff was listed on the Frankfurt Stock Exchange on 7 December 2015 and the de-rating of the share immediately set in as the discount based on trailing PE relative to the market opened up.

On 28 September 2016 Upington Investment Holdings B.V. (“Upington”), ultimately controlled by Dr Christo Wiese and according to Steinhoff’s 2017 Annual Report an entity identified by management where Markus Jooste or his close family members are believed to have a direct or indirect or special relationship, agreed to purchase 152 million existing ordinary shares held as treasury shares (inclusive of the 150.7 million shares bought in October 2015) at €5.055 per share – virtually at the same price that Steinhoff paid in October 2015. At that stage Steinhoff’s share price traded at a discount of approximately 40% to the FTSEJSE Industrial Index’s trailing PE metric.

Initially the market in general bought Steinhoff’s success story as reflected in the share price growth compared to the growth in shareholders’ interest according to the 2013 to the 2015 now “not to be relied on” financial statements. It is clear that 2016’s results casted doubt in investors’ minds regarding the company’s financials as the share price did not follow through – the ideal environment where short-sellers roam. 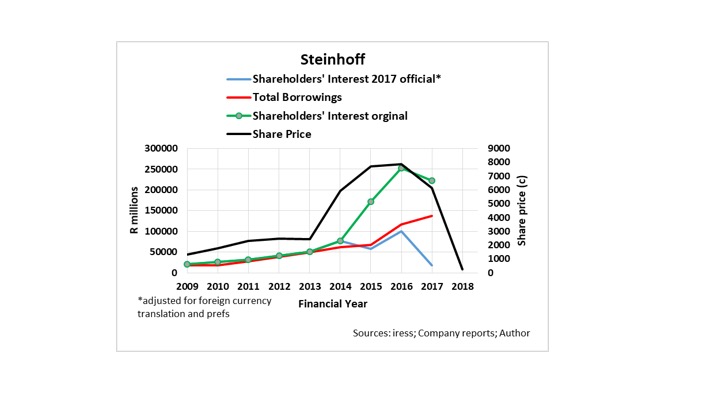 There are still more questions than answers. How Steinhoff ended up this way will probably remain a mystery for many years to come and I think that quite a number of PhD theses will follow trying to uncover the truth and how to prevent the truth not being reflected. One lesson is clear: you cannot fool the market… at least not all the time!