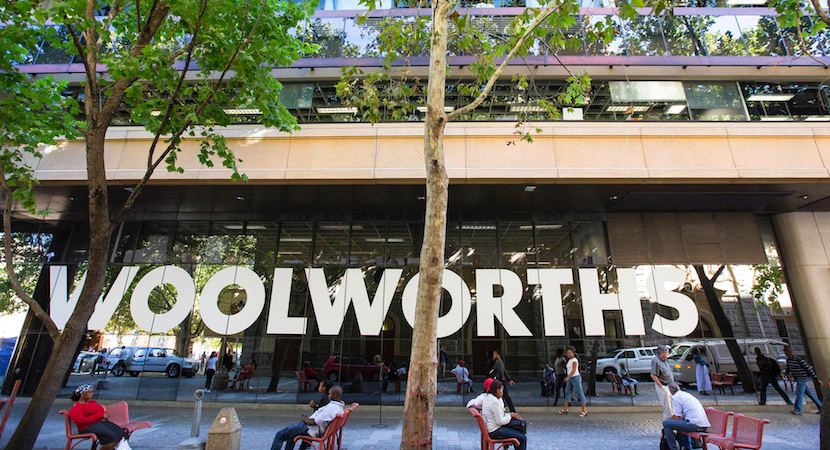 Here’s a scary assessment of the financials of a company that was once a stock market darling and desirable blue-chip investment. Woolworths (JSE: WHL), affectionately known by the locals as Woolies, is in trouble after mis-steps on the global expansion trail. As seasoned analyst Ryk de Klerk highlights, Woolies bosses decided to reduce the company’s dependency on the shrinking South African economy by seeking opportunities elsewhere, in particular snapping up businesses in Australia. But, by early last year, it was evident the South African retailer had failed to provide a spark to ignite improvements at department store chain David Jones. The share price has been ticking down steadily since 2015, when Woolies finalised the purchase of David Jones. Woolies has written down the value of David Jones and has cut jobs, but these moves will not be enough to reverse the company’s fortunes, reckons De Klerk. He goes as far as to comment that he doubts Woolworths will ever regain its blue chip status. First published on Business Report. – Jackie Cameron

For many years Woolworths Holdings was a blue chip that featured in most investment funds and tended to trade at a premium to the market as measured by the trailing price-to-earnings metric. Since November 2015 some R60bn or more than 55% of the company’s market capitalisation has been destroyed.

Yes, the extremely difficult trading conditions in South Africa where the economy went nowhere over the past few years; retail sales stagnated in inflation adjusted terms; consumers traded down to make ends meet; consumer behaviour changed; and, the move to buying online had a major impact. Woolies and other retailers in South Africa were taken on the back foot. Woolies, positioned at the higher end of the market, was probably the one that was worse off.

What has happened to Woolies was that the company was reduced from an outstanding company to an ordinary company due to a strategic move. The company’s initial diversification to establish a presence abroad paid off as the company’s southern hemisphere’s operations were very successful. For compelling reasons, at that stage, Woolies decided to compete in the southern hemisphere from a position of strength with Australia as its target market.

Woolies bought the listed retailer David Jones in 2014 for more than R21bn, around R5bn or 25% more than David Jones’ at the then listed market value in April 2014. According to company presentations, Woolies estimated that the deal would lead to incremental earnings before interest and tax in excess of R1.4bn within 5 years of the transaction.

The first red flag was raised. As the majority of the funding of the transaction was through raising debt, Woolies subsequently ended up with a total debt to equity ratio of almost 100% at the 2015 financial year-end compared to 15% in FY 2013.

The second red flag was raised. Woolies’ profitability and the efficiency with which the company’s capital is used, as measured by the return on capital employed fell to around 17% in the 2015 financial year from an average of about 44% in the 2 years preceding the transaction.

The market did not take it lightly. Before the 2015 financial results were announced, Woolies’ share price was trading at a premium of 35% to the market as measured by the trailing price-to-earnings ratio relative to the FTSE/JSE Industrial Index. Six months later it was trading at a discount of more than 25%. Yes, a massive underperformance of 45% against the market. Yes, from exceptional to ordinary.

After “normalising” Woolies’ capital with the foreign currency translations, it is evident that since the acquisition of David Jones the company’s return on capital employed stayed in line with that of the aggregate listed industrial companies as measured by Iress’ Financial Analysis System (FAS) until 2018. By annualising the interim results for the 2019 financial year, my estimates suggest that the return on capital probably eased from returns achieved according to the company’s 2018 financial results. 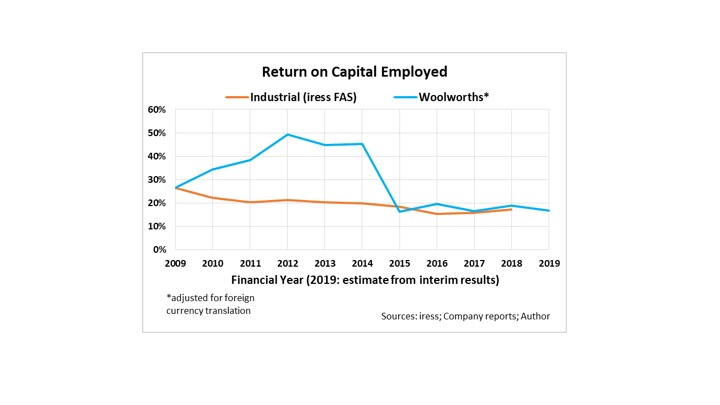 On top of it all, the David Jones acquisition failed to add value, not only from an earnings or profit enhancing point of view. Woolies had to take an impairment of David Jones’ assets of nearly R7bn in the 2018 financial year. Yes, the premium of around R5bn that Woolies paid above the market value in 2014 came back to bite Woolies’ shareholders.

A major concern to me is that the company is living dangerously. A company’s financial position or financial health is reflected in the shareholders’ interest and consists of share capital, share premium, retained income and other reserves. It is also the comfort zone for lenders to the company. It is evident that the company’s shareholders’ interest, excluding minority interests and adjusted for foreign currency translations, saw healthy growth from 2014 to 2017 but tanked thereafter mainly as a result of the David Jones impairment. 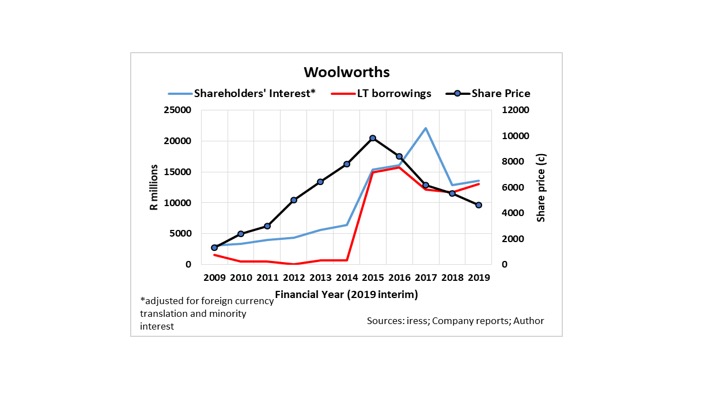 Retail stocks will probably remain under downside pressure as the first six months of 2019 did not look good from an economic point of view. The Eskom disaster and uncertainties leading up to the elections dampened consumers’ spirit and earnings surprises on the downside can be expected. It does seem that the outlook is improving though as some tailwinds are noticeable with consumers opening their purses again. The downward spiral in Woolies’ price-to-earnings ratio relative to the market may be arrested soon.

I doubt whether Woolies will attain its previous blue chip status again. The company’s debt position has put the company in a precarious situation as the company is very, if not extremely vulnerable, to a global recession. When the proverbial hits the fan, the company and or its financiers will need to restructure either the debt or the company itself.

Perhaps it is a time to buy some when nobody wants it. The Woolies’ executives are likely to wrap the company in cotton wool.