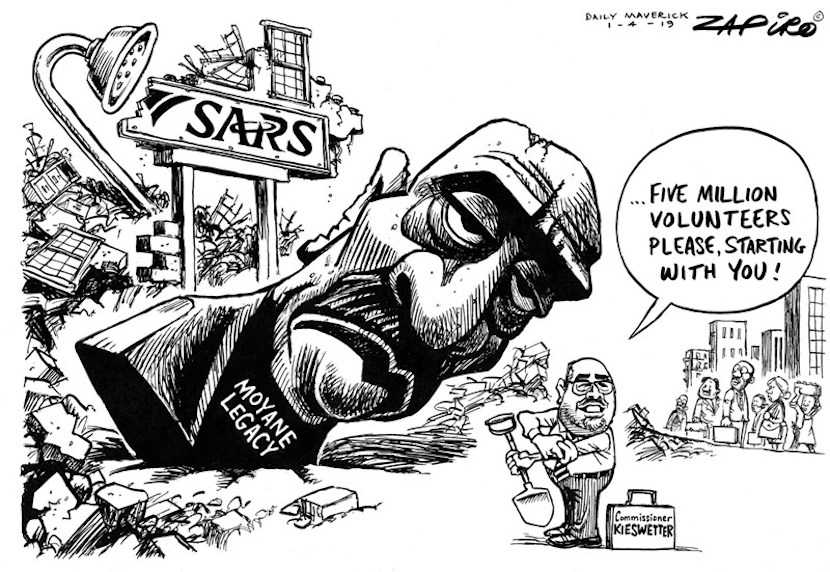 When you’ve been robbed blind and the wellspring of your revenue creation is bled dry, if not poisoned, there’s not a hell of a lot you can do. We’re talking about the SA Revenue Service, whose earlier mismanagement, fat-cat taxpayer favouritism and hollowing out of skilled staff under the infamous Tom Moyane, (and besieging by Zuptoids), has left it a shadow of its former self. One cannot envy Finance Minister Tito Mboweni; he’s caught between an Eskom/SOE rock and a Treasury hard place. Here SARS Commissioner Edward Kieswetter is brutally honest about the R57,4bn tax revenue short-fall to March this year. When you’re working with what, in global terms, is such a small tax base, an unprecedented lack of resources from Treasury (whose trillions your agency helped collect) is akin to being thrown a cotton thread to climb out of a hole. The current SARS critical-skills shortage, induced by Moyane’s incumbency, was described by the Nugent Commission as, “a massive failure of governance and integrity.” Yes, Treasury does not have resources, but the entire SARS restoration project is at risk. It’s ‘pamper the goose that lays the golden egg,’ or risk an Eskom financial collapse – Hobson’s Choice. – Chris Bateman

By Prinesha Naidoo and Ana Monteiro

(Bloomberg) – South Africa will struggle to meet revenue estimates this year, even as the new head of the tax agency sets about repairing the “deep damage” that took place under his predecessor’s watch.

“It’s going to be hard” to reach the estimated R1.58trn ($105bn) of revenue the National Treasury forecast for the year that ends in February, South African Revenue Service Commissioner Edward Kieswetter said in an interview at Bloomberg’s Johannesburg office Thursday. “The revenue-recovery program depends on whether I get more resources. I’ll certainly keep trying.”

The government has cut the tax agency’s budget amid a fight for resources, hindering the organization’s ability to do its work effectively. SARS’s R9.45bn allocation for this fiscal year is smaller than its total spending in the 2014 financial year. Kieswetter, who took over as head on May 1, inherited an institution that suffered “massive failure of governance and integrity” after the appointment of former head Tom Moyane in 2014, a commission that probed problems at the body found.

“The resources that have been allocated to SARS have been significantly constrained, for no other reason that there just is no money,” he said. “Unless we have the resources to rebuild the capability, the project of restoring SARS is at risk.”

Weak economic growth has translated into lower-than-expected tax revenue from both citizens and companies, with a total collection shortfall of R57.4bn in the year that ended March 31, the agency said in April.

SARS, which employs about 12,500 people, has around 1,000 vacancies, 600 of which are critical, Kieswetter said. Many skilled professionals left the organisation under the previous administration, and the new commissioner wants to lure some of them back to boost the agency’s capabilities.

“There isn’t a single silver bullet to fixing SARS,” he said. “I cannot even tell you the full extent of what it means to fix SARS. The tragedy of SARS is microcosmic of the tragedy of South Africa.”

Finance Minister Tito Mboweni will present the mid-term budget on Oct. 30. Additional support of R59bn for the cash-strapped power utility, Eskom, will probably push the fiscal deficit for this year much wider than the 4.5% of domestic product that was projected in February. Mboweni reiterated that the aid, combined with lower expected tax revenue, will come at a significant cost to taxpayers.

Mboweni “understands there are two sides to the coin of how much money you extract from the economy via taxes,” and is “very mindful” of the implications, Kieswetter said. To raise revenue, the minister will first make sure the agency functions effectively and see that cabinet colleagues “rein in their expenditure” before raising taxes, he said.

The Treasury in August said it has asked departments to prepare proposals on how to reduce expenditure in a way that has the least impact on service delivery.