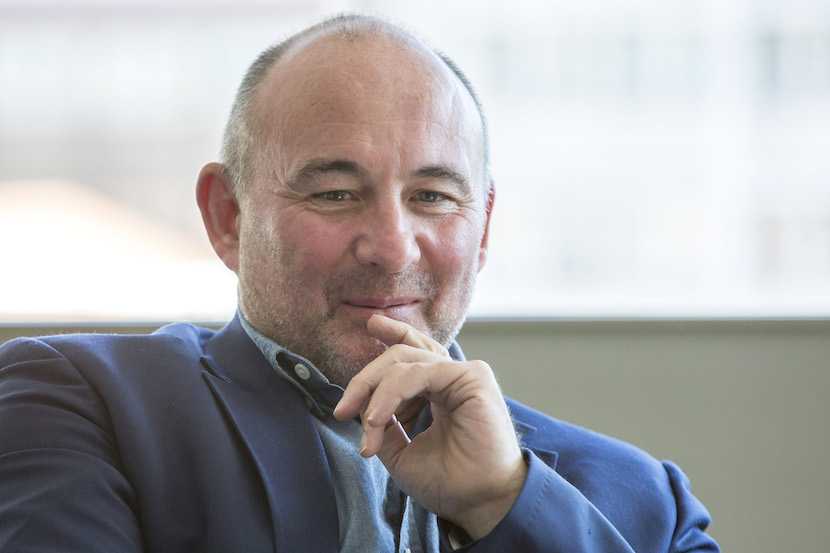 Ted Black specialises in sizing up investments through the prism of a Return on Assets Managed (ROAM) model. He has taken a close look at the pay packet of Woolworths CEO Ian Moir, with some fascinating insights refracting back. For starters, says Black, we shouldn’t judge Moir too harshly, even though his earnings are a staggering multiple of what the average Woolworths shop floor employee takes home. Moir is simply taking advantage of capitalism, which at this stage in its evolution protects a small, rich elite. If you know how to play the game, as Moir does, it is easy to become rich as an employee for a large corporate. – Jackie Cameron

The Economist’s recent cover story was about Elizabeth Warren’s plan to remake American capitalism if she becomes US president. You can expect more governments to follow her aim to transform a system she sees as corrupt and that fails ordinary people.

CEO pay is a symptom of the problem. In the UK a focus has been on those who led Thomas Cook to its collapse with thousands of jobs lost. It also includes the part its auditor played in the debacle. Here, for different reasons, a spotlight has shone on Ian Moir, CEO of Woolworths.

Dr. Tom Gilbert wrote a masterful book about performance management in 1978[1]. He argued that the subject of motivation and incentives arouses more nonsense, superstition and plain self-deception than any other management issue. He defined two kinds of incentive – money and the other ways you recognise people for good work.

Money is the most powerful lever. It’s also the hardest one to grasp. Incentive pay can work with lower level jobs when there’s a direct link between personal behaviour and physical, measurable results, but not as easily at senior levels.

The higher you go, the greasier the lever is. The issue becomes emotional and political. It is far less about performance than distribution of wealth: who gets how much for what?  So, let’s look at Moir.

The main driver of a CEO’s package is size – the size of sales revenue, profit, assets and numbers of people employed. The first chart links his or her pay to the asset base and Value-of-the-Firm (VOF), or market cap. 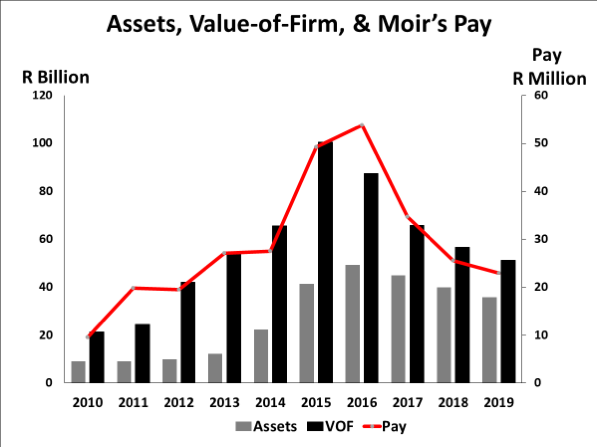 The correlations are high and send a clear message: if you are a CEO measured and rewarded mainly by the rise in share price, grow your asset base.

Moir has earned himself R303 million so far but has wiped out R10 billion of shareholder equity since 2016.That’s because “Size” doesn’t always link to performance, as the actress said.

If you were to wear an entrepreneurial “Owner’s shoes”, how would you best measure your CEO’s effectiveness? Wouldn’t it be a customer-focused, productivity-driven one as opposed to the share price?

Fundamentally, the long-term VOF derives, not from workforce productivity, but from three asset productivity measures. They are ATO (Asset Turnover), ROS% (Return-on-Sales), and ROAM% (Return-on-Total Assets Managed). The senior one is ATO.

Using them, the next chart compares the two major segments – Woolies (South Africa) and OZ (Country Road and David Jones). It shows their average ATO and ROAM in three distinct periods. 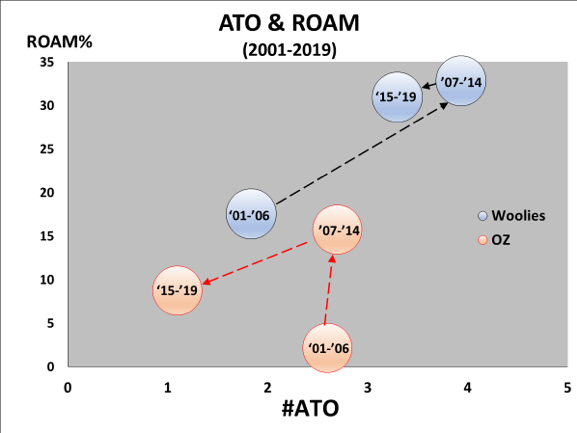 It tells us the higher the ATO the more profitable the firm is likely to be. The OZ investment in Country Road averaged a 2% ROAM from 2001 to 2006. Then it moved to a very respectable 16% till 2014 before the David Jones acquisition. Although OZ’s average ROAM since 2014 has been 9%, last year it was only 5% and that’s after “writing off” the goodwill of around R10 billion.

Woolies’ big, positive move was made in 2006 when Simon Susman was CEO. He changed the business model and ATO leapt from 1,6 to 4,4 – that’s R4,40 of sales generated by every Rand of assets managed. In 2013 the firm achieved a ROAM of 42% and has averaged more than 30% for the last five years. Few firms anywhere equal that. On the JSE, you can probably count them on the fingers of one hand.

There was another ATO effect. This is what happened to maybe the most critical ATO measure of all – the Cash-to-Cash Cycle (Inventory + Debtors – Accounts Payable/Sales%). The impact of Susman’s change on the Cash ROS margin was huge. 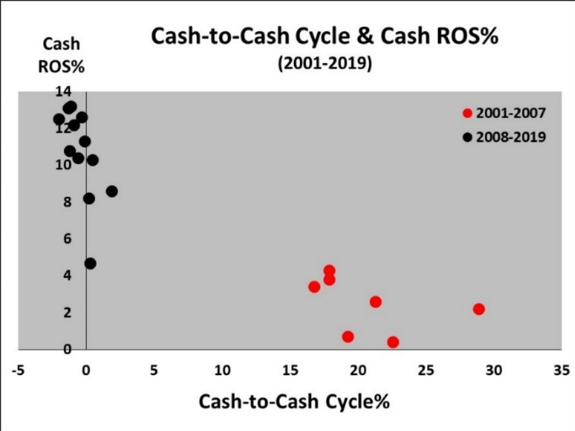 It jumped from low single figures to above 10% which had another positive effect. This time it was on the VOF measured as a ratio between Market Cap and the asset base. 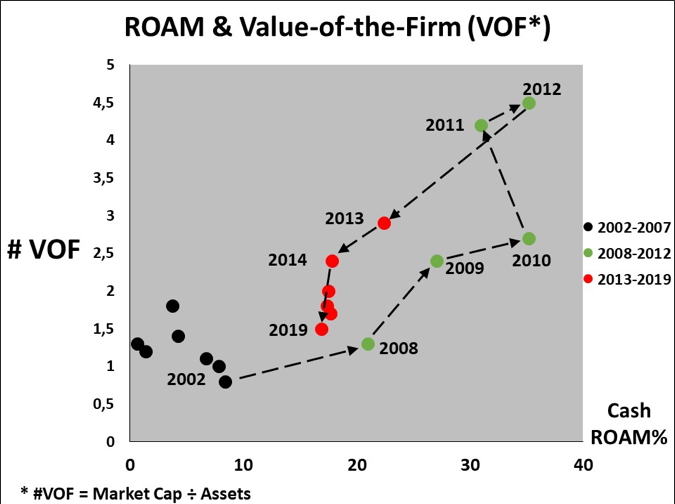 This chart tracks the firm’s progress since 2002 from low to high ROAM and back.  Moreover, more than 20% of the asset base has been “written off” because the “intangible” value was never there. It means the “real” ROAM is close to where it was in 2002.

So has Moir been overpaid?

It depends how you measure him. If you agree with Deloitte’s Shift Index finding that Return on Assets (ROA) is the best one, you will view his pay package as obscenely large, but typical. 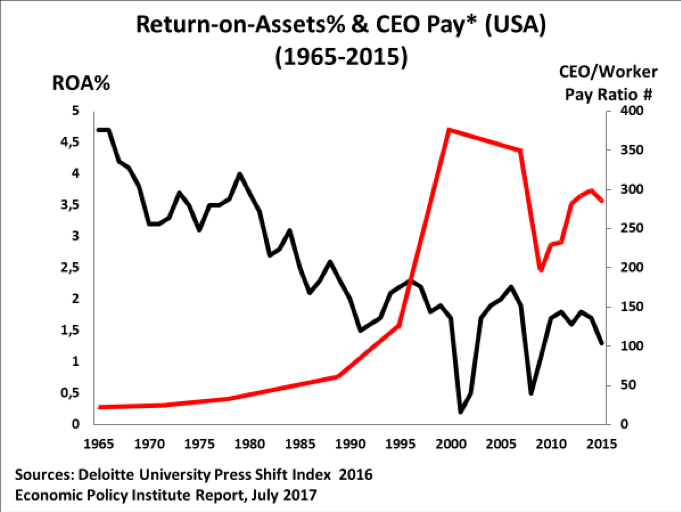 In 1965 the CEO-Worker average pay ratio was twenty and reached eighty by 1990. That’s when it took off like a rocket to 376 during the dotcom decade. After the banking fiasco it fell back, but is on the rise again. Despite huge improvements in worker productivity over that time, ROA has fallen by 72% since 1965 and is still trending down.

But don’t attack him, he’s only “playing the game” like everyone else in C Suites around the world. It’s like a sophisticated, 20th Century version of the “Shell Game” that has been played on the streets of cities, towns and villages since the Middle Ages … a swindle and illegal in most places.

There are three shells, or thimbles, and a small, round ball often called a pea. The operator starts the game by placing the pea under one of the shells, and then he quickly shuffles them around. He takes bets from his audience on where the pea is. If a player guesses correctly, he’ll double his money. If wrong, he loses it.

If you don’t know this game, you’ll think that several people are betting. In fact, most of them are part of a confidence ring that sucks you in to place a bet you are bound to lose. The financial Shell Game is run by CEOs, bankers, analysts, corporate lawyers, and the big four accounting firms. In cahoots with CEOs, the bankers and lawyers get huge fees from M&A “deals” most of which seem to fail, IPOs and share buybacks. The so called “auditors” are more interested in getting management consulting work and giving tax avoidance advice than doing the work they are employed to do.

As to the CEOs, look at Moir’s package because it’s typical of the part they play in the game. When joining in 2010, he received a “Golden Hello” fee of R7.5 million; then for appearing to be winning, a R5.9 million pay-out from a Country Road “Long Term Incentive Plan” and another “bonus” of R3.1 million; an annual salary of R2.54 million (that’s a CEO/Worker Ratio of 64 on its own!); a “retention bonus” of R3.9 million for sticking to the job; and to cap it all, a share allocation of R20 million. The only thing missing is the amount he’ll get for his “Golden Goodbye” handshake when it comes.

After the Soviet empire fell, capitalism became the only game in town and the “greed is good” dogma took hold. Free markets get economies going and governments are suspect is a view that makes sense. But is it the only view? Isn’t the world now dangerously out of balance because of greed?

It has resulted in a massive transfer of wealth to a “managerial” class. Most CEOs are bureaucrats who surf waves made by entrepreneurs before them and operating managers and people below them who do the real work with customers. That’s where you sow the seeds of strategy – not in boardrooms.

Managing is not easy, and CEOs should be well-paid for it. However, when they leave, their legacy is most often ephemeral – like a footprint in the sand on the seashore that disappears with the next incoming tide. There’s no doubt about it, through so-called “incentives”, most of them are paid far, far too much.

If these “Shell Game” operators truly believe in the ideology of capitalism and the benefits it can bring to society, then to me it looks like the Dunning Kruger effect at work. Isn’t it a case of smart people performing incompetently and failing to see it?

The asset productivity numbers seem to tell us so.