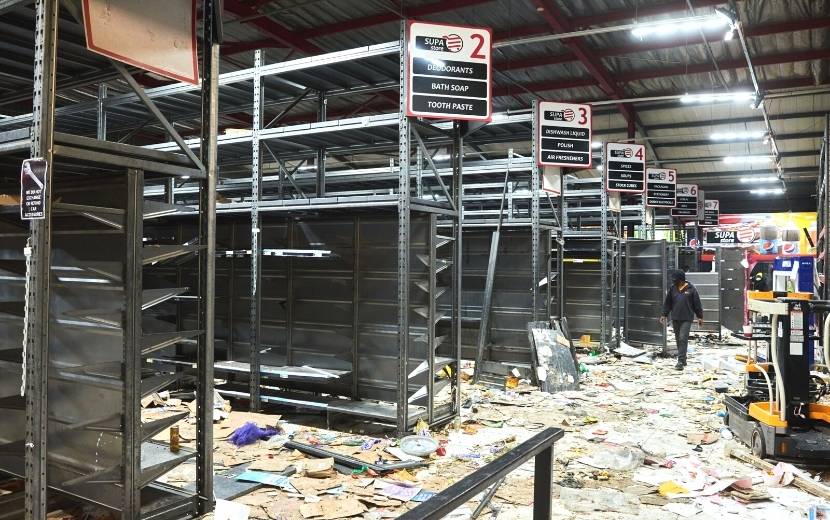 The ripple effects of the violent riots and looting that gripped South Africa last week, particularly the KwaZulu-Natal and Gauteng provinces, will be felt for years to come. In President Cyril Ramaphosa’s address to the nation on Friday, he announced 212 lives had been lost and over 2,550 people had been arrested. The violent riots and looting caused extensive damage to 161 malls and shopping centres as well as 11 warehouses, eight factories and 161 liquor outlets and distributors. While some claims will be assessed by heavyweight insurers such as Old Mutual Group and Santam, the bulk of the burden will fall to state-owned Sasria Insurance. Many businesses were already hanging on by a thread before the riots – having been severely affected by the imposition of lockdown regulations since March 2020. The widespread looting will unfortunately sound the death knell for many of these businesses. – Nadya Swart

South Africa’s riots insurer in spotlight after days of carnage

(Bloomberg) – As calm begins to return to South Africa following days of violent riots that caused billions of rand in damage, questions are being asked about who will foot the bill.

While some claims will be assessed by heavyweight insurers such as Old Mutual and Santam, the bulk of the burden will fall to one company little known outside the country: Sasria Insurance.

Sasria, a state-owned firm with R8.5bn ($591m) in assets under management, was founded shortly after the Soweto uprising of 1976, when at least 176 people died in demonstrations led by school children against the apartheid government. The frequency and scale of political protests that followed prompted private insurers to stop offering cover to vulnerable businesses, and Sasria was crated to fill the void.This week’s anarchic looting and destruction of all manner of buildings in two key provinces has thrust the company back into the spotlight. Formal estimates of the scale of the damage have yet to be calculated, but executives at Business Unity South Africa said Thursday the number of affected firms may extend into the thousands.

“We are well capitalised and have adequate reinsurance in place that gives us the comfort that we can facilitate these claims,” Sasria’s executive manager for insurance operations, Fareedah Benjamin, said in an interview. The insurer has three times its regulatory minimum capital requirement, she said.

The violence has its origins in demonstrations against the arrest of former President Jacob Zuma, but those sensing an opportunity to enrich themselves transformed the demonstrations into a looting spree, the government has said. At least 117 of people have died and authorities have made almost 1,500 arrests to date.

Listed companies to have reported the extent of their exposure include foods maker Tiger Brands Ltd., which said it lost 150 million rand of stock, and clothes retailer Mr Price Group Ltd., which saw 109 stores entirely cleaned out and hundreds more closed. But the rampage also swept up countless smaller businesses, many in under privileged parts of the coastal city of Durban and Johannesburg, the economic hub.

“We anticipate that in about two months’ time, we will have a clearer picture once all claims have been reported and investigations and quantification have been completed,” Sasria said in a statement Friday.

Sasria is not disputing the merits of claims related to the riots, only watching out for cases of fraud, Benjamin said. The company has centralised all applications so its most experienced handlers are able to process them quickly. 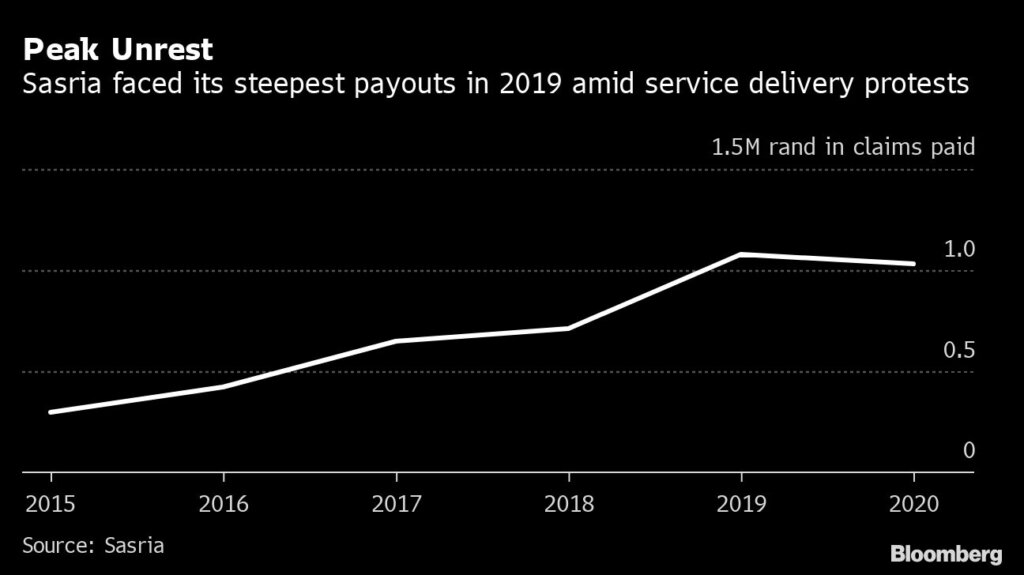 Many people and companies with Sasria policies may not even realise it, as commercial firms often include it in their own cover. All insured individuals have it alongside about 90% of businesses, Benjamin said.

Santam is monitoring the situation and in touch with Sasria about claims, the company said in an emailed statement. Old Mutual has put special measures in place to expedite payments, it said.

The private property-and-casualty insurers may find they still have exposure even with the Sasria safety net, said Warwick Bam, head of research at Avior Capital Markets.

“Business interruption policies could be triggered due to supply-chain disruption, lost production and store closures due to the risk of looting and violence,” he said.