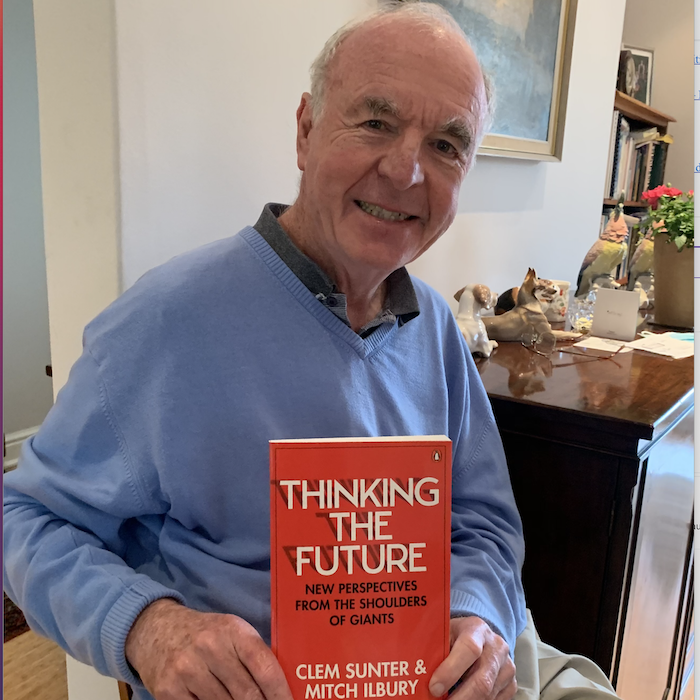 Author of ‘Thinking the Future’, Clem Sunter, joins Alec Hogg to weigh in on the chaos currently gripping South Africa. Sunter says that “the red flag of [the] looting and destruction of shopping malls has just raised the odds on the second scenario and demonstrated that we are at a tipping point where urgent action to create a people’s economy needs to be taken.”

I feel more that it’s about the desperation of the moment we’re in because even before the pandemic, the life of most people in this country was very hard. There was a very high rate of unemployment. I travel regularly from Somerset West through to Muizenberg on the coastal road. When I look at Khayelitsha on my right, I’m not one of those people who says, “oh gosh, how awful.” Every single one of those people has built that shack and has opened a shop on the side of the road.

They’re doing the best they can. Unfortunately, the pandemic has really had an impact on all this activity. As people were saying last night, there was a spark – which was the imprisonment of Jacob Zuma – and then suddenly people saw an opportunity of looting shops, which obviously is absolutely wrong and unlawful. But it shows that we have got to do something about our economy right now because it can have an impact for many years.

On the potential reasons behind the looting:

I think it’s a combination of people who are not that badly off who saw the opportunity – but also it was the opportunity for desperate people to probably get their hands on food. Obviously, there’s there’s two sides to this and there’s community resistance to this. But what we haven’t seen is the kind of revolution with leaders speaking from political platforms or anything like that. It was an opportunity that widened very quickly to a large number of people. One of those reasons, without a doubt, is the fact that our economy, at the moment, is in a very dire shape. We’ve run out of money. We’ve had years of corruption and now we’re paying the price. This event basically is something we’ve got to pick up on because it’s an indication that the worst case scenario has increased in probability.

On what the high road or low road for South Africa is from here:

The two scenarios we have in this book [Thinking the Future] is a people’s economy where Ramaphosa sets up the same kind of command council that he has for Covid. He does the same thing for trying to introduce a much fairer, inclusive economy. He would include quite a few entrepreneurs on that list – people like Adrian Gore who founded Discovery. People who know what it’s like to set up a business. He would put the same kind of passion into that, as he has done into trying to protect us from from Covid. We would have regular report backs on how many new businesses have been formed in the townships, how many banks have set up (micro-lending facilities), how many websites have been turned into e-stock exchanges in the major cities?

How much of a supply chain of a big business like Pick n Pay and Checkers has been focused on generating entrepreneurs? Those are the kind of statistics that would be regularly reported on, because the only way we’re going to create jobs now and get out of the appalling unemployment situation, is to put a huge emphasis on new business creation – because the old world of work is over. You have automation, robots and artificial intelligence. That’s why big business everywhere in the world is no longer creating the jobs of the last century. Indeed, the latest statistic in America is that two thirds of the jobs being created there are in small business. It’s not a sideline. It’s got to be turned into the number one priority for South Africa.

On whether the ANC has the ability to change and embrace much-needed policies:

That’s why I’ve written this book with Mitch [Ilbury]. We want to show them that the future is different. You’re repeating what people said to me in 1987 when I produced the first book on scenarios – it’s called The World in South Africa in the 1990’s. People said, “why did Anglo allow you to waste your time writing this book? There is no way the National Party government is ever going to negotiate with the ANC and with Nelson Mandela. Writing fairy tales is ridiculous.” Actually, it turned out to be correct and we did take the high road in releasing Nelson Mandela.

I saw him in prison about a month before he was released and he said he’d read the book and he took particular note of our high road scenario. I’m saying that even though this may be improbable, the whole point of our process (which we advocate in this book) is to put on the table improbable futures. Right now, it’s that the ANC will switch their economic policy into a full scale commitment to small business to create an inclusive economy – which is my version of economic freedom – and that in a few years time, people will look back and say, “you did capture in this particular book.”

We’ve all got to now put our weight behind this kind of movement. It’s not just a top down movement with several and a council of CEOs. It’s going to have to be a ground up movement as well in the sense of a revolution of thinking in the minds of municipalities and small towns and rural areas about what constitutes the best way to go forward in terms of creating a proper economy – an economy that actually we deserve since we are now a political democracy.