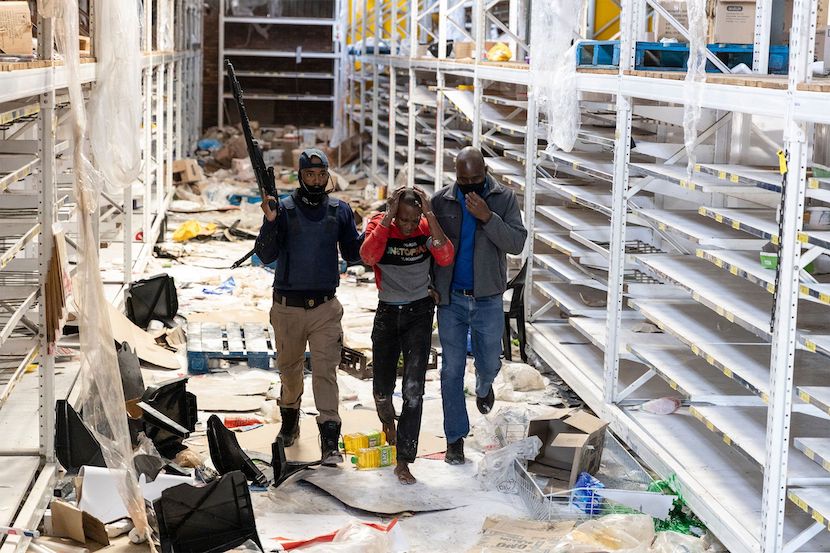 The riots and widespread looting that took the country by storm over the past week or so has been another headwind to corporate South Africa, which is still struggling to get back on its feet after the effects of the various lockdowns implemented to curb the spread of Covid-19. JSE-listed companies make up a trivial percentage of the total businesses in South Africa with an estimated 45,000 small businesses effected as a result of the blatant disregard for law and order. The sad reality is that many of the smaller businesses won’t be able make it back as the larger peers with bigger pockets are able to weather the storm.

As the week has progressed, JSE-listed businesses have slowly started to roll out the announcements, with the extent of the damage still being assessed in most circumstances. The effected sectors span far and wide with business largely closed in KZN and parts of Gauteng. In an interview with BizNews, Nedbank’s chief executive Mike Brown said that 112 ATMs and 37 branches had been directly effected, although the extent of the damage and looting is unknown given the circumstances that prevail. The man in charge of South Africa’s second largest lender, Sim Tshabalala, said that over 200 ATMs and 33 branches fell victim to the attacks following a media press conference held yesterday after announcing the consolidation of Liberty into the Standard Bank Group.

The property sector, which has seen a structural shift following the pandemic, is most effected with mall and shopping centre owners feeling the brunt of the pain. Despite having to rebuild much of what has been destroyed, many businesses will be unable to operate and thus rental collections will come under pressure. Jason McCormick, whose family owns a number of listed and unlisted properties in the rural and township communities, painted a grave picture of the devastation. He remains optimistic, however, with much of the chaos having tamed over the course of the week. His interview with BizNews founder Alec Hogg is worth a listen to gain further understanding of the carnage.

Other than property counters in the effected areas, food and discretionary retailers have been largely ravaged. Although the big four food retailers – that being Shoprite, Pick n Pay, Spar and Woolworths – have yet to communicate with investors, one would assume the damages and looting goes into the hundreds of millions given the widespread thievery which has been evidenced by videos circling on social media. Discretionary retailer Mr Price has confirmed 109 stores have been completely wiped out whilst food producer Tiger Brands estimates the costs of the loss of inventory and damage to property to be around R150m.

Despite the more obvious effected sectors, supply chains and logistics focused businesses have also suffered as a result of the disruptions. The N3, which was closed for much of this week as a result of the protests, is a key trade route between Johannesburg and Durban. This will cause knock on effects, which could result in food and fuel shortages in parts of South Africa.

The disruptions couldn’t have come at a worse time for corporate South Africa which is still battling from a 7% reduction in GDP in 2020. This weeks disruptions are expected to reduce GDP by 0.4% this year, a figure which was recently revised upwards from 3% to 4% by the World Bank. Many businesses, small and large, will be without an income for a prolonged period of time during the rebuilding phase. And for many businesses this will be the final straw. Unemployment will continue to rise and the inequality challenges that South Africa has faced since democracy will worsen.