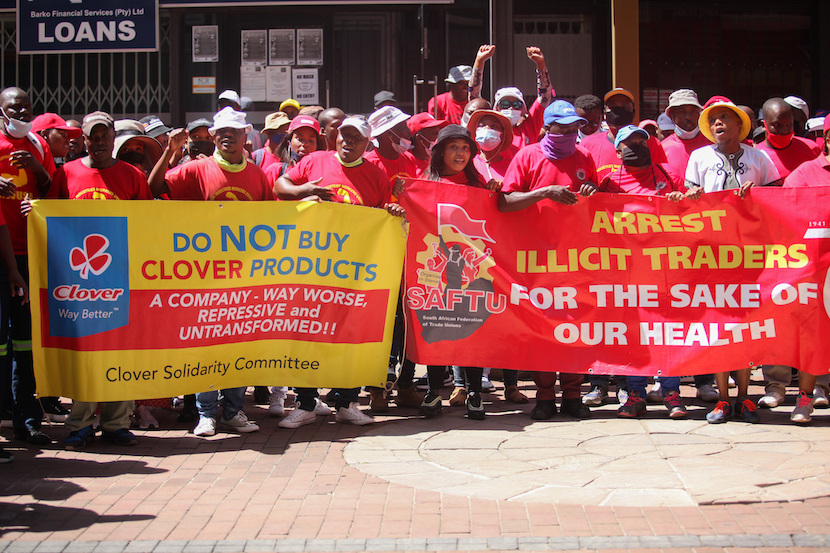 It’s little wonder that psychologists, theologians and philosophers concur on the damage labelling can do. Right off I can see the unions’ response to this piece; instead of arguing the gravamen, they will label the author as a union-bashing, right-wing, neo-capitalist. Which adds to the tragedy that prompts the argument. Don’t engage your opponent, nix him or her and you neatly side-step having to counter the points being made. It’s the same mindset with boycotting, invading private spaces and trashing products. The loudest, most aggressive voice wins. Of course, when the ruling party is dependent on you for its political survival, the situation becomes intractable. Until there’s a less beholden ruling party. In the meantime, just like the Zuptoids, the very people the unions claim to represent suffer the most. Let’s see a reasoned, well-argued response that can serve our readers and hopefully thoroughly disprove this thesis. This story first appeared in Politicsweb. – Chris Bateman

One of the obvious characteristics of labour unions is that most of them have zero understanding of economics. This is not only in South Africa, unions in other parts of the world tend to have a similar characteristic. How the local and the global economy ought to function is something labour unions do not grasp and refuse to grasp.

The rate at which this ignorance from labour unions is happening intrigues me that I sometimes ask myself, “To which schools did these people go?”. How is it that they do not even comprehend the basics of common sense?

Unions lack understanding in everything about the economy: investment; how prices work, including wage prices; the objective of business; trade; and so on.

What is troubling is that unions tend to present themselves as pro-poor. With this false presentation, they have managed to draw support from the dominant mainstream left-wing media. Hence, you’ll often find the media supporting their cause.

The ongoing strike against Clover, South Africa’s foods and beverages company, is an indicator of how destructive labour unions have become in the country.

Clover has been bought by an Israeli company, Central Bottling Company. As part of the acquisition process, the restructuring of the business must take effect. There is nothing surprising in that. When businesses are bought, such a process does take place, which sometimes leads to retrenchments.

Do unions have a right to peacefully protest that? Yes. That is their constitutional right and I believe in it. Where they bungle the whole Clover situation is that they go around removing Clover products in retail stores and they are calling for people to not buy Clover products. This is ill-conceived. With this action, more damage is done. More people will lose their jobs. Surely that is not what these unions want. How could people who claim to represent the interests of their employees be hell-bent on doing things that will result in more job losses? It’s staggering really.

The problems of unemployment in South Africa are real and unions have contributed to the rising unemployment. They support all kinds of policies that negatively affect economic growth. Every now and then they destabilise business, as they are doing to Clover right now.

They have politicised their Clover strikes and have wrapped the issue around the Israel-Palestine politics. They want Clover’s products boycotted, because, you know, Israel is an apartheid state oppressing the people of Palestine. No matter how you look at this matter, it is guaranteed the unions’ political action will result in damage.

This politicisation is not surprising. South Africa’s labour unions have been entangled in politics since the dawn of our democracy. That they have chosen to do that is fine. It is private citizens and public figures who should be cautious of the role of unions in our society; and keep in check and limit unions’ influence in politics and public policy.

Were our leaders men and women of integrity, they would have never allowed any influence of labour unions in politics. Our leaders tend not to do this because they want votes from these labour unions.

As these unions remove Clover’s products in retail stores, the burden is on business owners to guarantee security in their premises. They must protect their employees and their property by not allowing union members to storm in.

The police will not be there when rioters ransack the stores. They will come after the incident to compile the report. We live in a country where law and order are very weak. Hence, we are victims of the high rates of criminality.

South Africa is in desperate need of investment both local and foreign investment. The economic conditions from GDP growth and employment to poverty show we need more investment in the country.

Given the complexity of the Israel-Palestine conflict, we can trade with Israel while we call on Israel and Palestine to reform their policies towards each other.

We need a stronger law and order in South Africa. We cannot allow interest groups to do whatever they want to destabilise business.