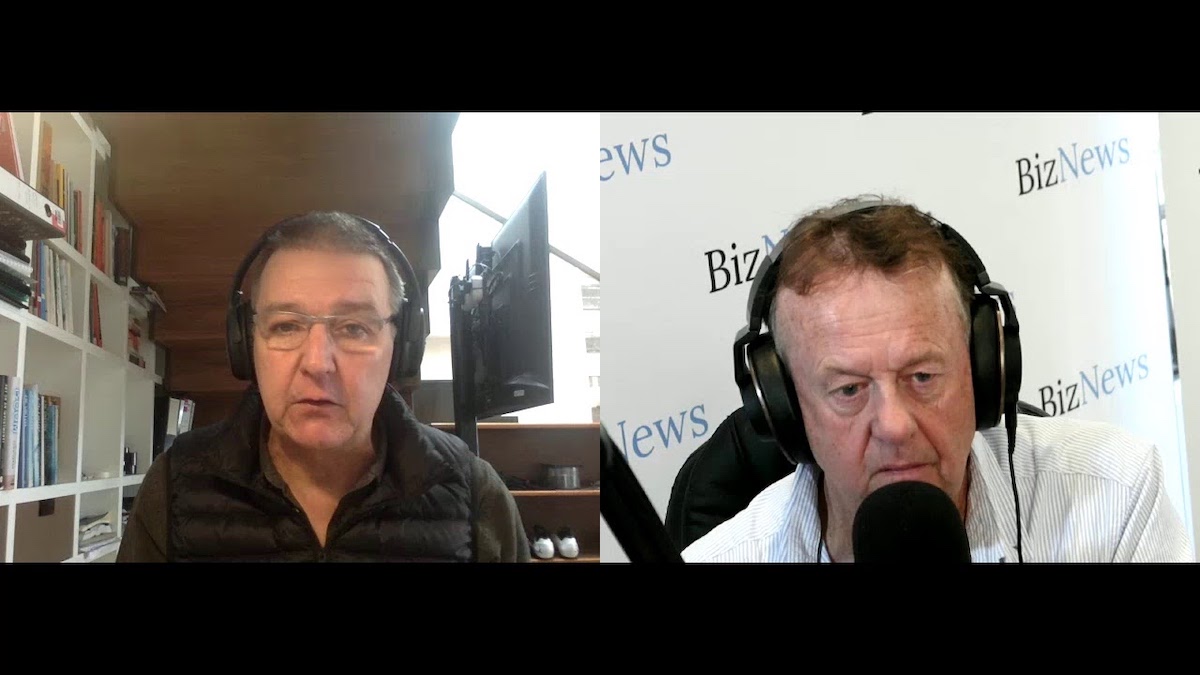 The man whose money management prowess has put him at the top of SA’s three- and five- year performance tables reckons JSE-listed shares will continue to outperform those on Wall Street for some time to come. In this interview with Alec Hogg of BizNews.com, he explains the reasons in some detail. Viljoen also offers thoughts on the big Naspers deal (‘could have done better’) and today’s new SA additions to the BizNews model portfolio, ABSA (‘likes’) and Transaction Capital (‘warming to it again’).

I’ll have some more twigs to share. Not a whole bundle. The whole bundle is a portfolio that spans, but this has some more twigs to share.  It’s still there. I haven’t sold it yet. I actually haven’t been buying any of it either, but I still think it’s undervalued. And in a portfolio context, I think it still makes the most sense. So I still own it and we’ll see what happens going forward

On when he decides to take twigs out of his portfolio

It’s one of two things. Either they get fully valued and you sell them, or the second thing you get an opportunity to buy something better or cheaper. And then it’s a relative argument you have to make. So it’s generally one of those two things that causes me to sell one of my twigs. Doesn’t happen very often though. Transactional activity in a portfolio is quite low.

I try to steer clear of a specific point in time single valuation number, so I think the value of any business is very much a gray area and depends on prospects, it depends on the environment,  on management actions at any particular point in time. So there’s a whole bunch of variables that go into it and these change on a regular basis. So as long as the stock is within that broad gray area of being undervalued, in other words, there is upside going forward, then I will continue to hold it. As long as that upside pays you for the risk you take on owning a stock when you own the stock of any business you’ve taken on business risk. That company specific business risk, whether it’s Naspers or whether it’s Avenge, you are taking on some of the risk. I mean that’s why you invest. Investing is taking on risks that you think you’re being paid to take on. And that’s effectively the definition of investing. So as long as it’s in that gray area, where in my estimation I’m being paid for owning the risk of that business, I’ll continue to hold on to it.

On the Naspers announcement yesterday

I mean, there’s positive and negatives. I think they are doing the right thing in principle, by trying to narrow the discount in discussion. So they need to narrow the discount, everything they’ve done up to now, has just served to widen the discount to complicate matters and has been highly ineffective. And one can understand why they would do that, because they were incentivized and they weren’t incentivized to know this one. However, I think a better way of narrowing the discount would be to unbundle the Tencent share to their shareholders and get on with a pure play venture capital investment firm, which is what they are doing. They’re just using the cash flow of Tencent to subsidise that. I think shareholders would rather choose whether they want to own a high quality business like Tencent, which generates lots of cash, albeit out of China with its own set of circumstances that are risks, or a portfolio of venture capital loss making businesses, which might turn into something substantial in the future. But at the moment they are loss making. I think investors probably don’t want to mix those two things. Some would prefer Tencent, others would prefer the venture capital portfolio. And so the right thing to do, to unlock or to narrow the discount, would be to unbundle the Tencent shares and then you’ll get a fair value for the venture capital portion of the business.

No, I think the 20% increase is fully justified by the actions taken to narrow the discount. The discount was very, very wide and it was saying that these guys aren’t going to be able to sell in the market. They at least partially want to close fund the market as rewarded for that. But I think that’s about it. You are still sitting with a business which is selling its crown jewel to invest in what might or might not be future crown jewels. It’s not something that excites me.

As long as you aren’t overallocated to Bitcoin or any of its derivatives or stablemates on the blockchain, I think it’s fine. I think 2 – 3% is a lot. I would say, whatever you’re comfortable with in terms of the possibility of losing everything. I mean it could go to zero so if you cancel the intention of the asset. You can comfortably own 10% of your assets in Bitcoin, whatever you are comfortable losing or whatever is not going to cause you sleepless nights. You know, that’s the number you should be investing in, with the knowledge that it could go to zero or it could go to a big number or it could do nothing, you know, you just don’t know. But it seems to me that the technology behind Bitcoin, lithium, and all these things, there are a lot of smart people spending a lot of money. Trying to come up with new cases that could benefit consumers globally. And if that happens, then there’s a tremendous upside.

On his challenge with Magnus Heystek and if anything’s changed

To be honest, I’m not sure. I would guess that we were probably where we were, relatively speaking, a few months ago. I think both markets have come down. I think our market might have come down less in the US market. But I’m not sure. I know the next five years will be lots of swings and roundabouts in this competition. There will be periods when SA starts to do really well and there will be periods when the US will do really well so it’s not something I’m tracking on a daily basis. I think over the five years, the odds are on my side and I’ve got a decent chance of winning. I mean, valuations are all about ideas. Valuations are what determine your chances of success. If you can buy a real asset at a very cheap valuation, you’ve got the odds on your side.

On his opinion on the South African markets

Part of this African market, if you look at the fundamentals of the market today, our long-term interest rates are 10% and 11%. Inflation is at 7%. We have a real 4% yield. And assets are all priced off the interest rate. So your risk free assets, government assets, interest rates and government asset bonds determine how assets in the market apply. So are assets, all priced off an 11% risk free long bond yield, which is the focus in real interest rates. Whereas US assets are priced off at 3% long bond yield, with inflation at -5%. And that again shows you how much cheaper our assets are than US assets. You have lower inflation and high interest rates and higher discount rates. And that’s just what’s happened, for instance, in bond markets this year, all bond yields have fallen from, I think, nine and a half of 10 to 11% to down 1%. And US bond yields are also down from, say, one, one and a half to 3%. Yields are up and prices are down also 1 and a half percent, except investors in US bonds have lost money because they don’t have the protection of a high interest rate. I mean, the interest rate was 1% when they started. So if they lose capital, when interest rates move up, you make capital losses. There’s no buffer from high interest rates against that, whereas an all bond market of yields also moved up substantially. But because we have a running yield of 10% odd we’ve lost almost 10% on capital but we’ve earned 10% on interest, so we’re square.

And again, that illustrates how valuations help you. So that’s the fundamental behind the market. We have lower interest rates, lower inflation rates and higher interest rates than most developed markets in the world. So we have valuations on our side. If you look at the PE ratio of SA stocks, excluding the Richmonds and the Naspers and all the international stock, local stocks, the three ratios is 8 times. That’s a yield of say 12% with inflation of, say, 7% and real growth of 1 or 2%. So that’s nominal growth of almost 10% with the earning yield that’s over 20% return expected from SA stocks. Now a lot has to go wrong, and I’m sure a lot will go wrong in this country, but a lot has to go wrong to keep them to 22%, so you’ve got valuations on your side. So I’m still optimistic about the returns. Not the economy. I’m not optimistic about the economy. I’m not optimistic about what’s happening in politics. I’m not optimistic about a lot of stuff in this country, on the Treasury being on in 12. I’m not optimistic about that. But I’m optimistic about the returns that assets can generate from where they are priced today because they are discounting all these measures that you and I and all of us know about. I mean, these are not new negatives. These are existing negatives. And markets are smart. They price these very quickly  so these negatives are in the price. And it has to go a lot worse to make a dent in your expected return of over 20%. Whereas in the US, everything has to go right just to generate a 3 or 4% return. And that’s what makes it difficult.

And so that is one of the stocks, one of the twigs that we sold out of in the Counterpoint Value Fund about six months, nine months. But now, the R38 I see is trading there today, it’s probably worth another look. It is a great business with great management. I just think the share price has got a bit ahead of itself: one always has to be careful with these types of stocks. Where you have good management running a good business, they always seem to be too expensive all the time. And if you don’t, if you’re not careful, you miss out on quite a good ride. So that is one I think is worth watching.