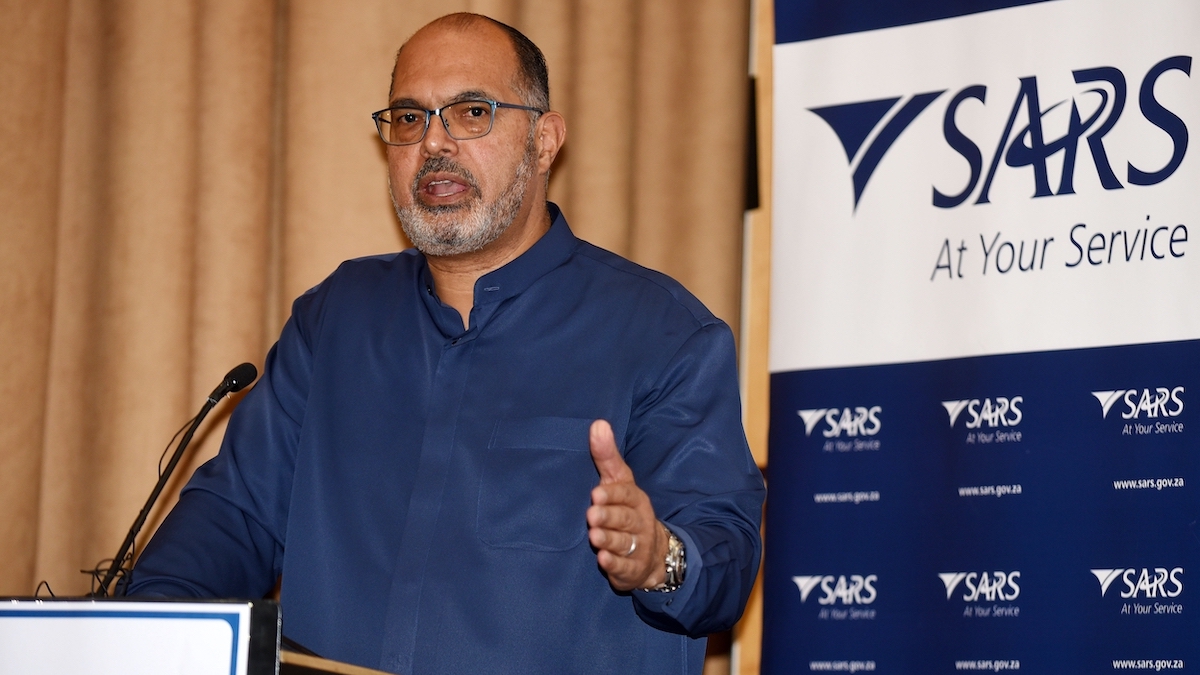 Edward Kieswetter was appointed commissioner of the South African Revenue Service in May 2019, and has been working tirelessly to try to establish a modern, professional service removed from the ravages of state capture and the damage inflicted by Bain & Co. In the interview below, he notes that it will take a very persistent effort and focus to restore and build for the future. Kieswetter points out that when you come into an organisation that has been deliberately divided with corrupt intent, you have employees who have picked sides. “The South African Revenue Service is no different. We still have people who haven’t given up on the affiliation with a particular side or faction. So a very clear message from me to all our leaders and our staff is that we are not politicians: we do our work without fear, favour and prejudice.” He believes that one of the things SARS has been able to do is institute a very focused modernisation programme that makes the tax filing obligation for most taxpayers a non-event. The interview below published in The Conversation explains his thinking. – Sandra Laurence

State Capture eroded institutions in South Africa. How the revenue service is rebuilding itself

South Africa’s Revenue Service is one of many state institutions in South Africa that have been fingered in the Judicial Commission of Inquiry into State Capture. In addition, a special commission established to investigate internal governance at the agency found massive failures of governance. Professor Mills Soko spoke to Commissioner Edward Kieswetter about the turnaround at the state institution.

Mills Soko: You worked as a power station manager at the state utility Eskom which is currently in so much trouble. What was your experience working there? And what comes to mind when you observe the utility today?

Edward Kieswetter: I was a young 33-year-old when I was appointed to run a small power station. We had a highly scaffolded environment, surrounded by people who were steeped in practical experience and institutional memory.

In the decade I was privileged to be there, we transformed Eskom from an average performing utility into a globally admired one. By 2000 it was constantly performing at a plant availability of above 90%, a breakdown rate of 3% or less, and the planned maintenance of 7%.

I am fortunate that I’ve been invited now to serve on the technical committee that the presidency has called together to try and fix the challenges facing electricity supply.

During the period of state capture institutions such as Eskom – as well as the South African Revenue Service, the National Prosecuting Authority and many others – were hollowed out deliberately and consciously so that they could serve a corrupt purpose.

I can tell you from my own experience that the damage exacted on these institutions is deep and painful, and it will take very persistent effort and focus for us to restore and to build for the future.

That’s the challenge of our country. The capability of the state has been significantly weakened by the period of state capture. But we also have to be honest enough to say there has been a steady decline over a number of years that has brought us to a point where we are largely a state that doesn’t have the capacity it needs to serve the country.

Mills Soko: You were appointed as Commissioner to the South African Revenue Service in May 2019. What have you learnt? Achieved?

Edward Kieswetter: I have to tell you that the actual damage at the South African Revenue Service is significantly deeper than what any commission of inquiry could ever report.

One of the things we were able to do is institute a very focused modernisation programme that makes the tax filing obligation for most taxpayers a non-event. We believe the best service is no service. We don’t want to be better at queue management, we want to address the root causes so we don’t have queues.

And so we’ve introduced a value proposition for over 3 million taxpayers called auto assessment. We use data and artificial intelligence to select taxpayers for further auditing or investigation. But we’ll also use data and technology to provide a seamless experience for most taxpayers.

Mills Soko: How were you received by employees?

Edward Kieswetter: The sad reality of state capture and the political dynamic of South Africa at an institutional level is that it forces you to pick a side. And when people pick sides, they lose objectivity.

When you come into an organisation that has been deliberately divided with a corrupt intent, you have employees who have picked sides. The South African Revenue Service is no different. We still have people who haven’t given up on the affiliation with a particular side or faction.

So a very clear message from me to all our leaders and our staff is we are not politicians: we do our work without fear, favour and prejudice.

Mills Soko: Do we think organisations have been rid of state capture?

Edward Kieswetter: The answer is no. I don’t think there are any institutions in South Africa that have been cured completely of state capture. The political dynamic in the country today, the contestation for power – within a political party or across political parties – is a very active attempt to keep alive the endowment that people derived from state capture.

South Africa is still inflicted by the residue of state capture and the 10-year period of the former administration. It has spilled over into this administration. We only have to look at the level of corruption that manifested during the procurement phase of the COVID response. We have a long way to go to cure ourselves from the ills of state capture.

Mills Soko: How much progress has been made in terms of undoing state capture at the South African Revenue Service?

Edward Kieswetter: The Nugent report made about 27 recommendations. The first was to look at the leadership of the organisation, to evaluate EXCO. And we have substantively dealt with that. We reached agreement with a number of senior leaders and we have parted ways.

After years of being deprived of filling critical vacancies because of financial constraints, last year we began to start recruiting people and providing some inward mobility for people into more meaningful roles.

We established a listening campaign where staff could call in and talk, and report certain things that needed to be addressed.

We introduced an employee rights charter that we are socialising through change management.

We also introduced an internal reparations process. We have just over 30 individuals who felt that they were personally compromised. We are in the final stages of an external reparation process.

We appointed an advisory committee using eminent jurists independent of the South African Revenue Service to take representation from those we have settled with.

We have meetings underway to recoup wasteful and fruitless expenditure from a number of executives caught up in this, specifically in relation to the global management consultancy firm, Bain & Company. We have instituted a process of recovering the money plus interest that they paid. And we have handed over the files to the Hawks, the South African Police Services’ Directorate for Priority Crime Investigation, and the National Prosecuting Authority for further investigation. When the prosecution authority is ready to start prosecution, we will be drawn into this to provide evidence and to support that process.

We’ve also worked with our counterparts in the US about the misdemeanours at Bain to try and ensure that Bain is brought to book. We think there’s a strong enough case for them to be seriously investigated, to see if there are criminal cases to answer for.

Mills Soko: During the difficult years the South African Revenue Service lost a lot of good people. Have you been able to woo some back?

Edward Kieswetter One of the things that we are entertaining is to build a pool of so-called grey beards (and female equivalents). We want them to be part of a resource from which younger, more or less experienced people can draw from.

We are also introducing new graduates, young people into the organisation so that we keep the generational mix. We’ve established a junior board so that we can institutionalise the voice of people below 35 years old.

*This is an excerpt of the Wits Business School Leadership Dialogue. The full interview is available here.