The internet giant aims to list its international internet assets on Euronext Amsterdam on 11 September.

Naspers shareholders get to vote next month on the internet giant’s plan to list its international business on the Euronext Amsterdam stock exchange. It posted a circular to shareholders on Friday convening a general meeting for 23 August.

The general meeting was postponed last month due to a postal error, which resulted in the circular to some shareholders being labelled with the wrong addresses. It will now be held directly after its annual general meeting in Cape Town, giving shareholders enough time to fully consider the circular and the resolution needed to implement the transaction. It had planned to list NewCo on Euronext on 19 July but is now aiming for a September 11 listing.

The global business, which will be called Prosus, will include all the group’s internet assets outside of SA, including its companies and investments in the online classifieds, payments and fintech, food delivery, e-tail, travel, education, and social and internet platforms sectors, among others. It says assets including mail.ru, OLX, Avito, letgo, PayU, Tencent, iFood, Swiggy, DeliveryHero, Udemy, eMAG, and MakeMyTrip are some of the world’s leading and fastest-growing internet brands. It will also include its 31% stake in Chinese internet giant Tencent.

It expects Prosus to become the largest listed consumer internet company by value in Europe. Naspers will retain at least 73% of the business, giving it a free float of up to 27% that it believes will attract more investors. Prosus will have a secondary listing on the JSE, while Naspers will retain its primary listing on the JSE, with direct stakes in Takealot and Media24, alongside its majority stake in Prosus. By separating its businesses, the group hopes to narrow the discount Naspers shares trade at relative to the value of its assets and also reduce its outsized weighting on the JSE, where it up makes up almost a quarter of the shareholder-weighted SWIX index. It said the listing would help maximise shareholder value over time.

Following the delay to the original timing, I am pleased that the listing of Prosus is on track to be completed in September,” group CEO Bob van Dijk said. “It’s a significant step for Naspers and will present a new opportunity for global internet investors to access our unique portfolio of international internet assets, with incremental investment creating a strong platform for our future growth ambitions.”

Shareholders will receive shares in the new company or can choose to receive more shares in Naspers instead, subject to certain limits. 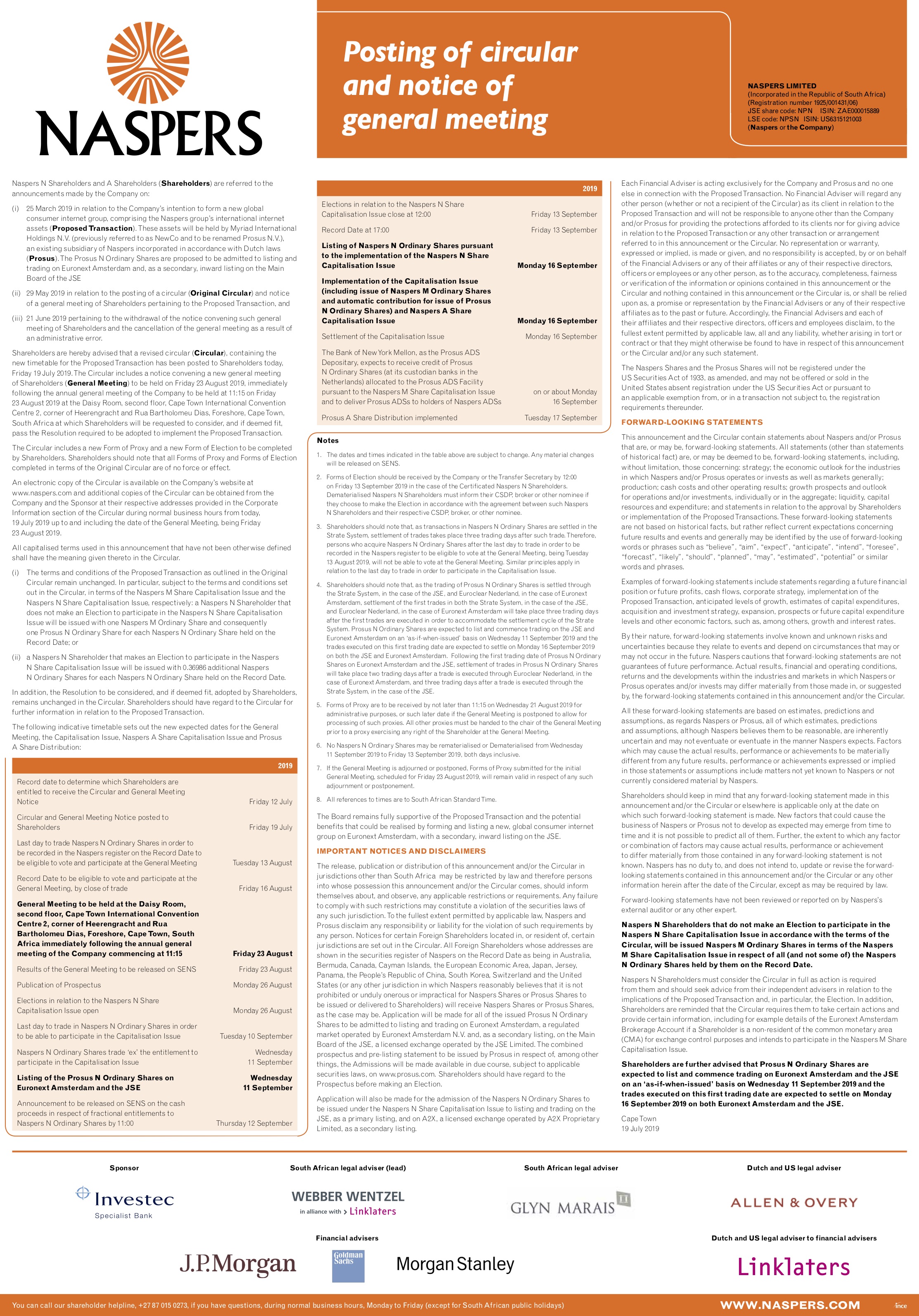