Naspers says the top 10 consumer internet giant will have an estimated market capitalisation of $100bn on day one.

Naspers says Prosus will have a market capitalisation of about $100bn when it lists the business housing its international internet businesses on Euronext Amsterdam next month.

Releasing its prospectus ahead of the 11 September flotation, the group said its international assets, currently housed in Myriad International, made it one of the top 10 largest consumer interest groups in the world, with businesses and investments serving more than 1.5 billion people in 89 markets. It claims to be market leader in 77 of those.

The vast majority of shareholders approved the listing at a general meeting on Friday. Under the terms of the transaction, they will be given Naspers ‘M’ shares which will then be replaced with Prosus ‘N’ shares following the listing.

Prosus will include all the group’s internet assets outside of SA, including its companies and investments in the online classifieds, payments and fintech, food delivery, e-tail, travel, education, and social and internet platforms sectors, among others. Assets include mail.ru, OLX, Avito, letgo, PayU, Tencent, iFood, Swiggy, DeliveryHero, Udemy, eMAG, and MakeMyTrip. It will also house its 31% stake in Chinese internet giant Tencent. Naspers will retain at least 73% of the new company, which will have a secondary listing on the JSE. Naspers will retain its primary listing on the JSE, with direct stakes in Takealot and Media24, alongside its majority stake in Prosus.

Naspers said forming and listing the new global internet group in Amsterdam was a significant step for the group and would provide a strong platform to attract incremental investor capital. The Euronext markets are some of the largest capital markets in Europe, with close to 1,300 listed issuers with a combined market capitalisation of €3.5trn at the end of March. It said the they connected all of the European markets in which it would operating, providing it with access to investor bases in the Eurozone, the UK and other international investors.

The listing will present an appealing new opportunity for international tech investors to have access to our unique portfolio of international internet assets,” Naspers CEO Bob van Dijk said. “It will comprise some of the world’s leading and fastest-growing internet companies that are playing an increasingly important role in helping people improve their daily lives in some of the most exciting markets on the planet.”

Shareholders who want additional Naspers stock instead of shares in Prosus must elect to do so before noon on Friday 13 September. They will get 0.36986 Naspers shares for each share held. 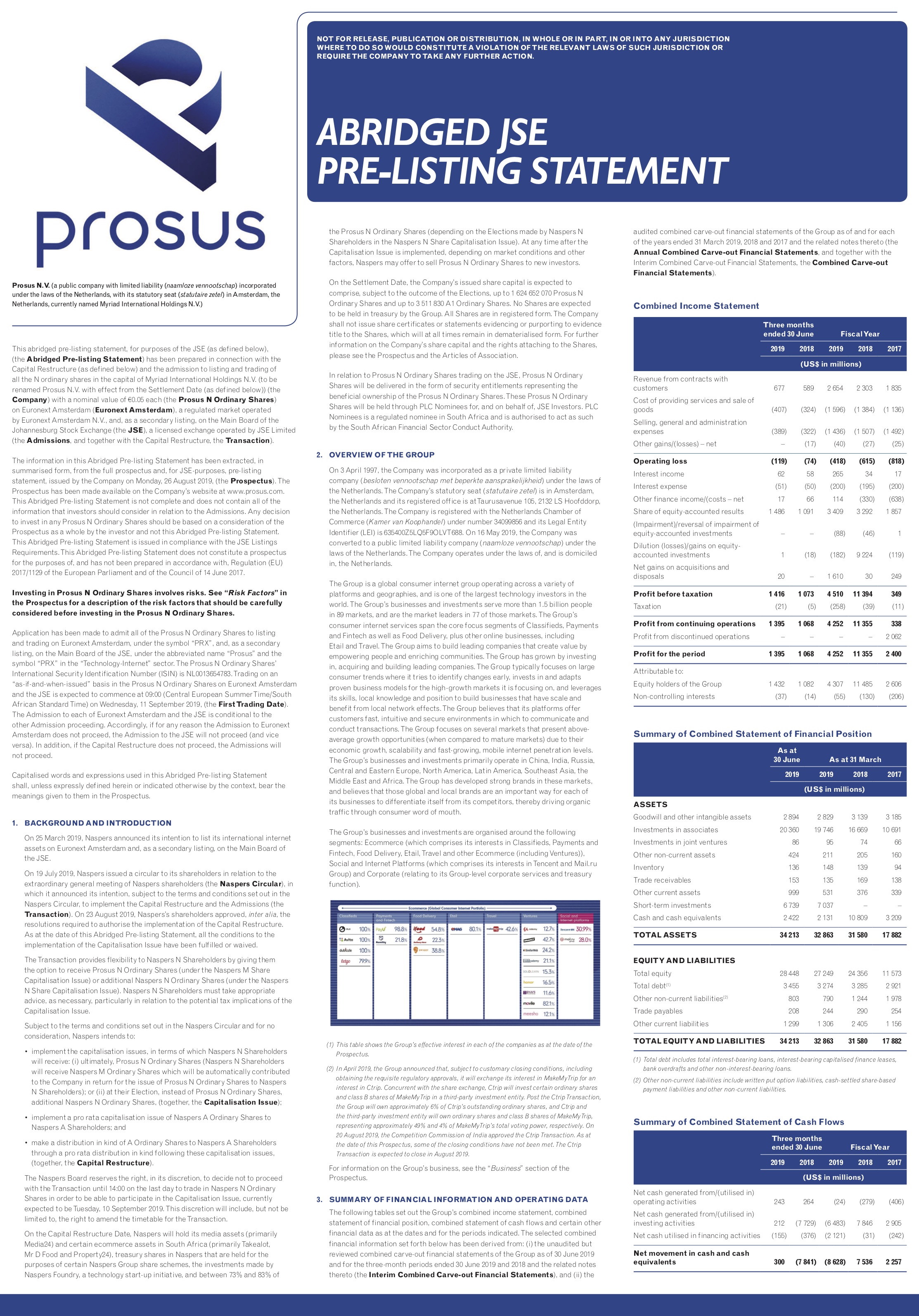