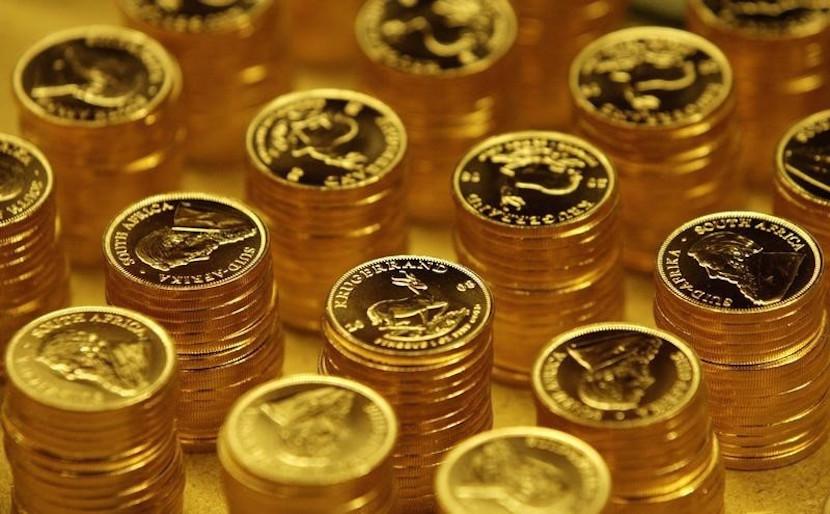 The gold price hit its highest level in eight years this week, so is now the time to invest? On the one hand the sage of Omaha Warren Buffett says “it (gold) doesn’t do anything but sit there and look at you.” But gold is like any investment circle, it has both its bears and bulls, with one such bull Alan Demby, the owner of the South African Gold Exchange and its retail outlet the Scoin shop. In this interview with Biznews founder Alec Hogg, Demby explores the different avenues an investor can undertake when investing in gold. Arguing why it should make up a portion of the basket, but shouldn’t be the only egg. – Stuart Lowman

This interview is brought to you by the Scoin shop. Mr. Alan Demby is the chief executive and owner of South Africa Gold Coin and retail division, Coin Shop. I would call you Mr. Gold or Mr. Gold Coin of South Africa because you do have quite a dominant position in the South African market on Krugerrands and other gold coins.

I don’t mind you calling me Mr. Gold because I’ve been in the business for over 40 years. I’ve stuck it out through all the good times and bad times through the blood markets and bear markets, is proof of my determination that gold is/was and will be a store of value for many years to come.

How is it done and maybe we can start off with the point of being a store of value relative to inflation that over a long period of time and investment in gold and particularly in gold coins like the Krugerrands in South Africa have outperformed the inflation rate and many other investments.

If we go to the turn of the century, just after Y2K and you look at the numbers today, it has appreciated by $1,500 and 50% per annum. Over the last 20 years gold has appreciated by 25% per annum, proving its value. Gold, like many other asset classes, appreciates and depreciates but our mantra has always been it’s just a store of value, a store of wealth. You put 10%, 15% of your money into gold, you actually don’t even want it to perform. It’s just there to give you peace of mind and of course all the money in existence for the last 6,000 years. Gold is still there. You can’t print gold like you can print dollars. Although gold is quoted in dollars and in South African terms the rand dollar exchange rate multiplied by the gold price in dollars gives you R35,000 an ounce.

My concern is that the Americans are just printing dollars like crazy and one wonders what is the value of the dollar.

That’s the big question many people are trying to get their heads around at the moment. In South Africa, we’re printing R500bn, 25% of our annual budget. In the US, they are printing $2trn. Where do you go to hedge yourself against the inevitable inflation that will come from this. I suppose Mr. Gold will say gold.

Well inflation isn’t that bad. Hyperinflation is really the elephant in the room. When you have countries like Germany, Zimbabwe and Venezuela just printing billions and billions of notes you are going to devalue the very thing and your buying power will dissipate enormously. A certain amount of inflation is not the end of the world. After 1986 the Japanese market crashed out and the government printed a trillion dollars in those days and somehow it helped keep the country afloat. Admittedly, the share market was overinflated. It was about 36,000 and took a smack and went as low as about 12,000-13,000. Printing money within reason is not the worst thing so long as you keep control over it. If that’s possible and so long as the money is used for all the right things, buying food, houses, homes and medical care. If it is used for the right reasons, it’s not the worst thing. But having said that, we can go back to the gold standard. You can’t trade in gold coins for your everyday purchases. So, you still need money. Gold has a place and even money that is devalued still has a place in the world.

Mr. Demby, what have your clients been doing lately when they’ve looked around at this Covid-19 crisis have they wanted to buy or sell their gold.

We do offer a two way market. A lot of people are cashing out. If you think about it Krugerrands with probably R5,000 an ounce 20 years ago. So if you can cash out at R35,000, it’s an amazing return.

On the other hand, people who have got cash are looking for a safe haven. Gold is at a moment a good bet at the same time. You can’t put all your money into gold and not all at one moment in time. You know I’m a firm believer in Rand cost averaging. If the present situation gets you started to buy a coin,  one coin a month, one coin every quarter, one coin a year,  it’s a good way to start but to put all your eggs in one basket, to put all your money in the bank or your money in Krugerrands, which is not an income producing asset is senseless. I’m a firm believer that you don’t put all your eggs in one basket – to have a mix of assets is probably your best investment strategy – probably is your best investment strategy of all time.

How much would you recommend to your clients that they put into gold. How much of their portfolio?

Many years ago, I suggested 10%  to 15%,  but in the last 10 years when the previous government was profligate and were doing bad deals and the rand was devaluing and depreciating, I moved from 15% to 25%. In spite of that, you still had to have other asset classes. It’s true that the property market ballooned and has taken a bit of a smack of late. It’s true that the share market has increased enormously and has taken a bit of a smack at the moment. Nevertheless, it’s a mix of assets that is going to save your bacon at the end of the day.

You said earlier that this is a good time to invest in gold. You regard gold as a good bet. Why?

It’s just the ultimate insurance policy against the insurance policy. It’s just a store of value. It’s one of those illogical investments or illogical assets that everybody somehow appreciates. You can hold it in your hand. The next best thing are dollars and dollars are widely used as a transactional currency, but somehow gold is accepted and acknowledged and the price is the price which is set internationally. I don’t think there is perhaps the manipulation with gold as there is with currencies. America has just printed a couple of trillion dollars worth of notes. Gold has to be mined, it has to be brought up out of the ground and even that’s trading at about $1,600 an ounce. It’s low cost $1,000 an ounce to get it out of the ground. A combination of gold and other assets is the ultimate balance to your portfolio.

It’s a good point you made, I was reading recently that if you took all the gold that had ever been mined from year dot to today it would only fill two Olympic sized swimming pools which is quite a sobering thought. The amount of supply that’s out there is not infinite.

How do people buy gold coins today. We know ETFs on stock markets here and internationally, but some people actually physically hold it. How do you get your hands on a Krugerrand? Do I simply come to the SA gold coin exchange and say give me?

You can say give me, but you also have to give me cash. You give me R35,000. In 1967, the Rand Refinery minted the first Krugerrand and that started a trend. Already in the 50 odd years that Krugerrands have been in exchange, there are about 17m coins that have been minted. In 1980, the Royal Canadian Mint brought out Maple Leaf coins. It was then followed by the Nuggets from the Perth Mint, the Pandas from the Chinese Mint and the Philharmonic. Strangely enough, the Philharmonic William Coin is probably one of the most sought after coins in the world. I am still not sure why the Austrian Mint is still one of the key minters of coins but in totality since 1967 the market in bullion gold coins is approximately 150m coins. People do want to hold and own tangible coins.

The financial markets are happy to own ETFs. If you then buy a thousand coins or more to store and carry, and to ensure it is near impossible but you know for the average man in the street who buys a few coins, it’s a better option to keep the coins physically. Our average client holds about twelve Krugerrands which is worth about half a million rand today. There is something about that tangibility of gold which appeals to the men in the street.

Of course, it’s internationally universal. It can be taken anywhere. It can be traded. You don’t need to go to a foreign exchange dealer. People will accept it. Even the South African Reserve Bank will accept your Krugerrands. At the moment, you’d get a spot from them but if you were trading them in the marketplace you would get a small premium over the gold price. It’s as easy as walking into the gold coin exchange or to any one of our Scoin shops around the country. it’s very simple and very easy to trade.

Probably when we met 20 years ago, we couldn’t give Krugerrands away at R5,000, now it’s R35,000. We can’t get enough of them. Markets are overbought and markets are oversold. When it comes to Krugerrands – I’ve noticed in all the years that I’ve been in the business – it’s one of those asset classes that needs to be purchased on an ongoing basis irrespective of the price. But of course people are people. People are human. They do tend to buy when prices increase when there’s price inflation and they do tend to sell when the price falls. It’s just the nature of the beast.

Alan Demby is the owner of the South African gold coin exchange and its retail outlet the Scoin Shop.