The lockdown pushed more subscribers its way and it is now ready to add streaming services from Netflix and Amazon Prime to its DStv platform.

MultiChoice has lived up to its pledge of a R2.5bn maiden dividend in its first full year as a listed company as it added more viewers and reduced losses from its operations outside SA. And it hopes to continue growing subscriber numbers by offering Netflix and Amazon Prime Video on its DStv platform.

The video entertainment group, which was unbundled by Naspers and listed on the JSE in February last year, said the improved financial performance was achieved despite continued macroeconomic headwinds across the continent.

The group added 500,000 SA subscribers last year, lifting its base by 6% to 8.4 million on a 90-day active basis as Covid-19 and the lockdown sent more viewers its way. Its Rest of Africa (RoA) business grew its 90-day active subscriber base by 4%, or 400,000, to top 11 million for the first time – with March’s lockdown also resulting in more viewers. In total, it now reaches 19.5 million households in 50 countries across the continent.

Revenue increased by 3% to R51.4bn in the year to end-March as subscription revenue rose 4% to R42.8bn. It said subscriber growth was modest over the year due to pressure on consumers, while revenue growth was also held back by its decision not to increase prices of its Premium package in SA. Trading profit grew 14% to R8bn as it kept a lid on expenses, with cost savings of about R1.4bn generated during the year and a R800m reduction in losses in RoA.

Core headline earnings increased by 38% to R2.5bn while core headline earnings per share were up 39% at 569c. Consolidated free cash flow jumped 59% to R5.2bn, driven mainly by the improvement in the trading results from RoA operations and cost containment. On top of its maiden dividend, which works out at 565c per share, it spent R1.7 billion buying back its shares last year.

MultiChoice said the aftermath of the virus and the low oil price would probably have a negative impact on the economies of many of its markets, with weaker currencies and higher levels of unemployment expected. Still, it plans to continue scaling its video entertainment services across the continent, focusing on the mass-market for pay-TV as well as over-the-top (OTT). In addition to its own subscription video-on-demand service, Showmax, it plans to expand its content aggregator model to include streaming services from Netflix and Amazon Prime on its Explora decoder, keeping viewers on its platform.

“We are certainly facing unprecedented times but are pleased with our performance and the resilience we have demonstrated this year,” CEO Calvo Mawela said. “Our healthy balance sheet positions us well to weather the uncertainties in our markets going forward.” 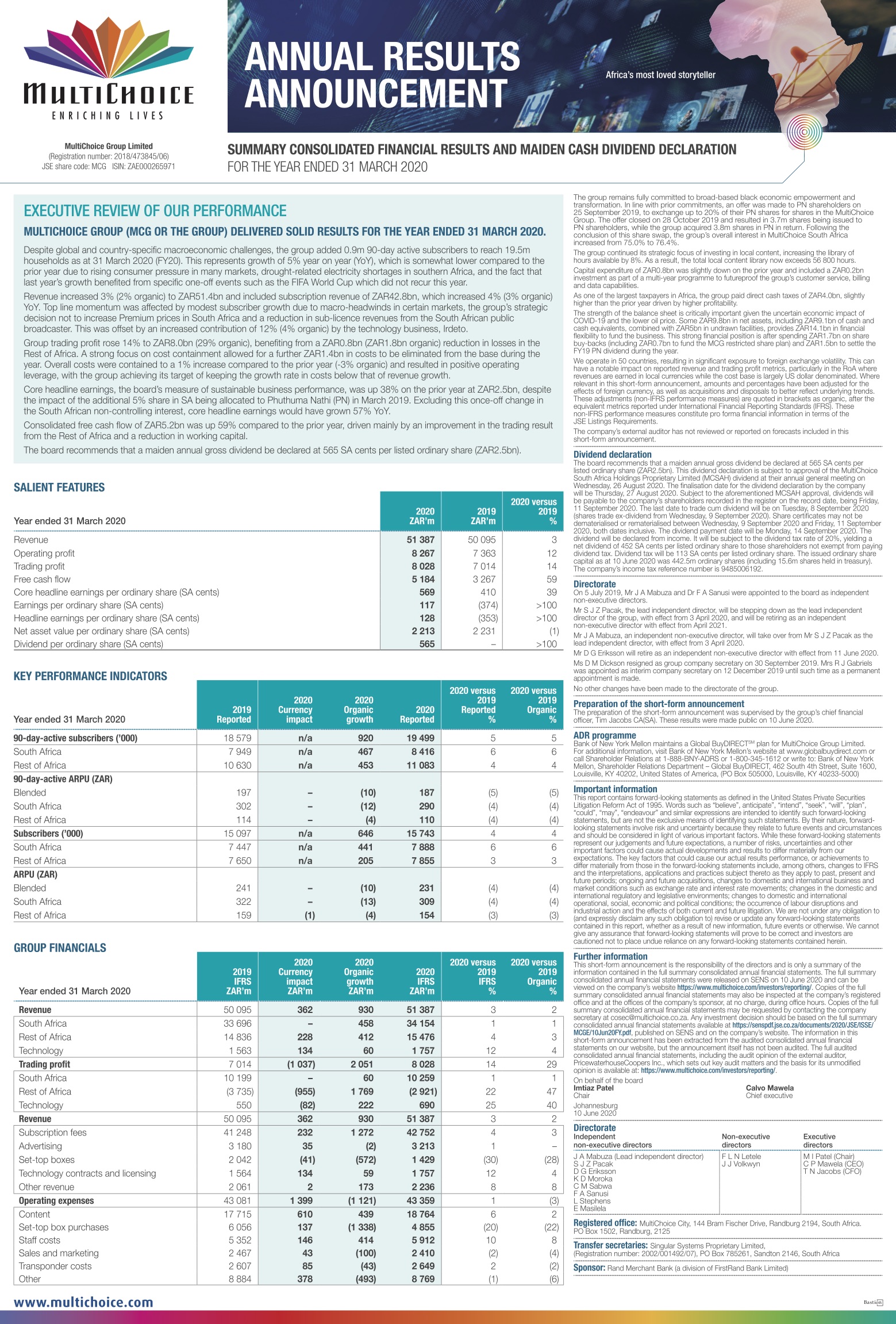