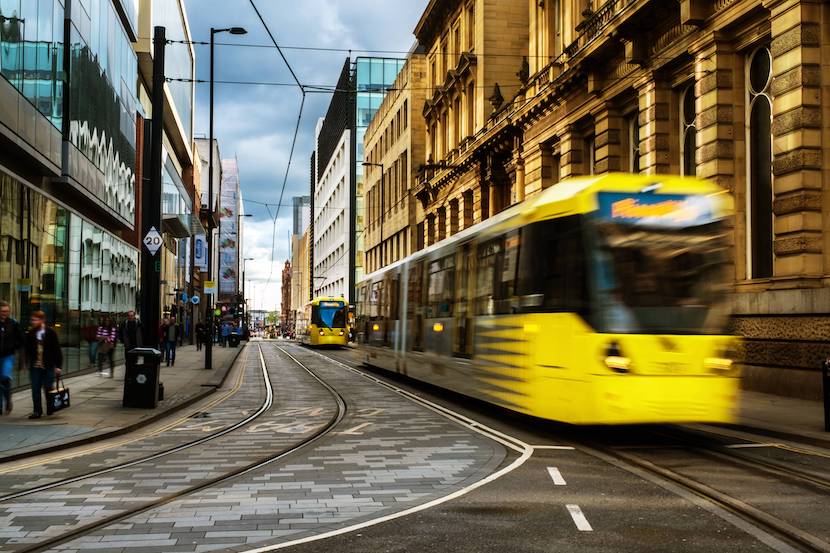 Manchester is one of the most popular UK cities with investors, and it is not hard to see why. Over the years it has been transformed into a thriving place to live and the best place in the UK to do business according to Management Today.

As Manchester regenerated, more and more people moved there from other cities. People mainly came from London as they were priced out of the capital and Manchester offers similar employment opportunities. This has caused property prices in Manchester to rise 34% in the last seven years – 4% above the national average.

Although the average property price in Manchester has increased, some areas have been more popular than others. For those wondering where to buy investment property in Manchester UK, it is best to know which places have experienced growth and where there is still opportunity to invest and achieve capital growth.

Where has Manchester property price growth been? 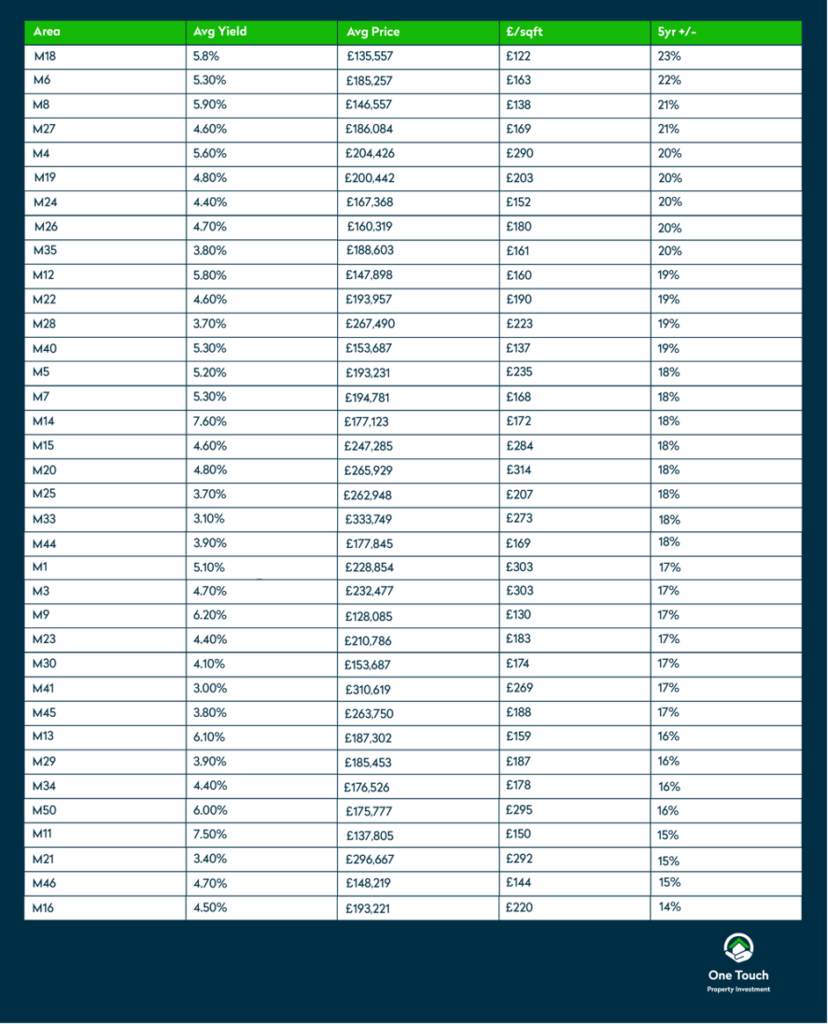 One area that has seen the biggest percentage growth in five years is the M18 post code that covers Gorton and Ardwick. Regeneration of this area started in 2006 when Manchester City Council redeveloped Gorton District Shopping Centre. Further regeneration is in the pipeline to make the area a better place to live and work, which has so far lifted its inexpensive property values by 23% to a modest average of R2.75m.

Other areas that have seen a notable increase include the City of Salford. Regeneration here is rather well known as it is home to MediaCityUK. Tenants include the BBC and ITV Granada. Of course, media professionals have moved to the area to be close to jobs, and as such various high-rise residential blocks have sprung up. The availability of modern housing paired with the new employment opportunities at media companies has pushed up property prices by 22% over the last five years.

Often, the style of home matters just as much as the area. New developments with modern features can command a higher asking price. As can characterful period buildings. Manhattan Apartments is a new development in Manchester’s Chinatown district, minutes away from Spinningfields, Manchester Art Gallery and the Northern Quarter. Although its enviable location contributes to its hefty starting price of R6.7m for a one-bedroom apartment, it also offers bike storage, private balconies, and a concierge service, elevating it against competing residential blocks in the vicinity.

Property prices in Manchester have been climbing higher than the national average for years now, but have they hit a ceiling?

The increase in property prices is driven by demand, and in short, whether more people want to live there than there are properties available. The imbalance in demand and available property means that prices will increase. If resources are scare, people will pay more for it than the competing bidder.

As more jobs shift from London to Manchester to save on office space, and with the normalisation of home working, it is predicted that more people will set up home in Manchester. By 2034 Manchester’s population is predicted to grow by 56,000 – over 10% according to Cushman and Wakefield.  This will coincide with job creation and the steepest house price increase in the country, according to the Sunday Times.

A few commercial office space developments are already in discussion. These include a 370,000sq ft office site One City Road, and the £1.4bn Mayfield development site close to Piccadilly Station that will comprise 220,000 sq ft of Grade A office space. When the office space is complete, businesses will follow.

Last year, Siemens announced it was going to move its head office from Surrey to Didsbury, and the year before that Hewlett Packard announced a move to Manchester’s new city neighbourhood, Circle Square. These are the global names announcing a move to Manchester. It is also attractive to smaller businesses and has the most start-ups out of anywhere in the North West.

These positive indictors with regards to the jobs market and population growth in Manchester mean that consultants such as JLL are already forecasting a 17.1% growth in residential property prices up to 2024.

Up and Coming Areas of Manchester

Of course, there are some areas that are still poised for growth. Investors should focus on neighbourhoods next to areas of regeneration. When regenerated areas become a bit more expensive, people will start to spill into surrounding areas which means good rental yields and eventually capital growth.

One significant redevelopment project was NOMA. Backed by The Co-Operative Group, its plan was to revitalise 20-acres of land in the northern part of the city centre. The development consists of 4 million square feet of office, residential, retail, leisure, and hotel space., It is understandable that property in the northern part of the city centre has gone up considerably in value since regeneration commenced. However, Ancoats is close by and according to Rightmove, average prices are R5.74m. It has a lot of things going for it outside of being located close to Manchester’s city centre. Ancoats was recently named the 13th coolest neighbourhood in the world, home to lots of independent eateries and cafes. Mills and warehouses are being transformed into co-working spaces and apartments, and craft breweries are popping up all the time. 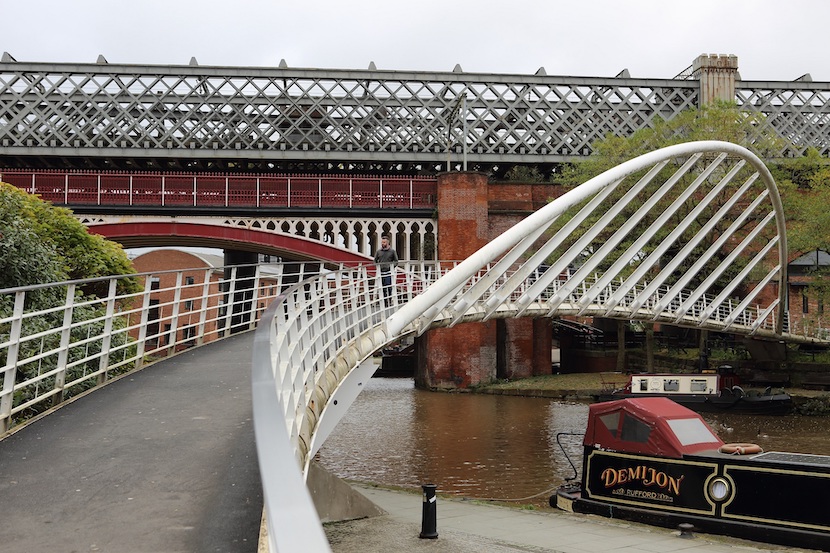 Completing in Q4 2021, Ancoats Gardens is a sustainable, new-build development aimed at professionals seeking a sophisticated, convenient and social living experience in the heart of Manchester city centre. Featuring 155 high-spec 1, 2, and 3-bedroom apartments, the development will also boast its own exclusive gym, private gardens, coffee roastery and shared social space for tenants.

One-bedroom apartments start from R4.87m – slightly under the average for Ancoats. This, combined with the predicted rise in house prices in Ancoats, means there is opportunity for capital growth.

Another redevelopment project proposed for the city centre is St. John’s. The new development will be on the old Granada Studios site in Quay Street, Manchester. It is headed up by Manchester Quay Ltd, which is a partnership between Manchester City Council and Allied London. The site will be mixed-use, with plans for homes, offices, retail, and leisure space.  It aims to combine culture, work and living and one of the focal points will be The Factory, an arts venue with theatre space.

Further along the River Irwell lies Pomona Island. The area has gone a bit under the radar until recently, yet it lies between the three boroughs of Manchester, Salford, and Trafford. It also has two metrolink stations, so it is surprisingly well-connected. Residents can access the MediaCityUK and Trafford Centre with ease, and Manchester’s city centre is also just a short journey away. 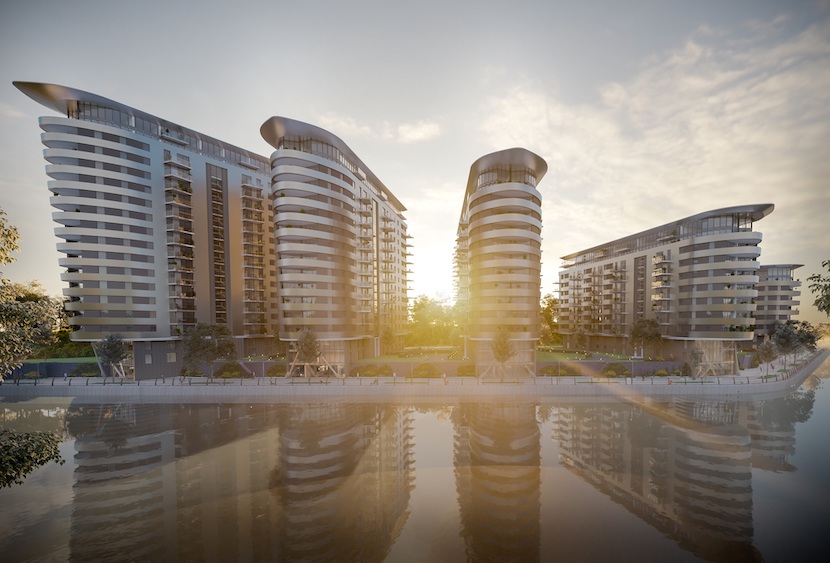 Manchester Waters is a new development in Pomona Island. 500 apartments will be delivered over five phases. The development is proving so popular that the first two phases are already sold out.

Manchester Waters will compose of studio, one, two, and three-bedroom apartments with stunning views across the waterfront. Prices for studios start from R2.53m and are 20% less than North Manchester and Salford, allowing for capital growth and good rental yields.

Residents will have the opportunity to make use of the onsite cinema room and gym. Each apartment will also be furnished to a high standard with chrome fixtures and fittings, spacious layouts, and riverside views.

Two Metrolink stops are within a five-minute walk, so residents can travel around easily. Apartments will be spacious and bright, tailored towards high end living. Due to the appealing nature of the apartments and convenient location, we anticipate good occupancy rates, and a 6% yield can be achieved.

Salford is another area that has experienced high growth in property prices yet remains reasonable for now.

has a competitive housing market, with prices on average 20% lower than that of Greater Manchester. As it is just a short commute from Manchester city centre and has a commercial centre of its own, it is of no surprise that many people find it convenient as a place to live.

According to Zoopla, property prices in Salford have risen by 20.07%, and recent research suggests it is the most profitable city for buy to let. 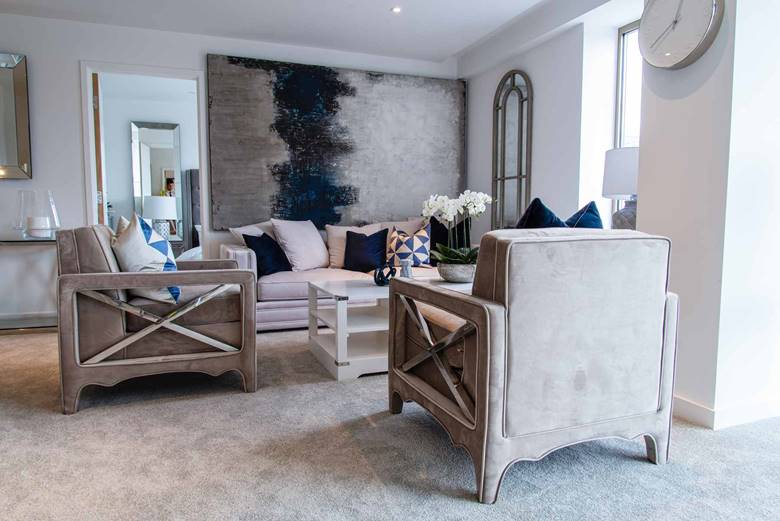 The Crescent is one option in Salford. Comprising a mixture of one, two, and three-bedroom apartments, prices start from R4.48m. The development itself boasts an indoor pool and spa, and residents can enjoy unrivalled views over the River Irwell and surrounding parklands. Investors should consider Salford now to achieve the best possible rental yields and capital growth.

Will property prices continue to increase in Manchester?

The projections for house price growth in Manchester look strong. As we mentioned earlier, many businesses have relocated or are in the process of relocating to Manchester due to cheaper office space and a large graduate population. For individuals looking to lower their living expenses, Manchester has become a popular choice due to its comparatively lower rents and other living costs. According to Numbeo, the overall cost of living in Manchester is 18.27% less than that of London, and this is excluding rent, which is around 40% cheaper in Manchester.

Fundamentals such as population growth, employment opportunities and a lack of house building to meet the demand will cause house prices to increase. Prices do tend to hit a ceiling when few people can afford it, but when investors choose areas with moderately priced options undergoing regeneration, there is scope for capital growth, browse our website for more Manchester property investment opportunities.