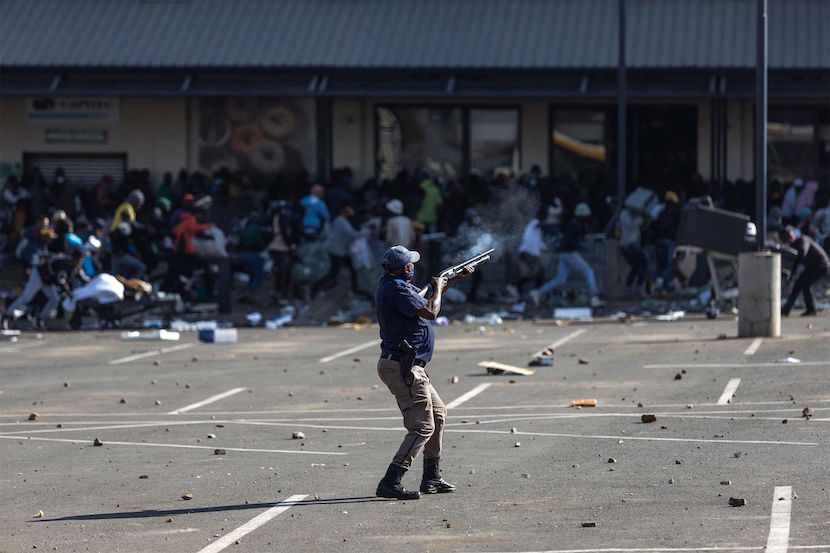 In this week’s Currency Focus podcast, Andre Cilliers, currency strategist at TreasuryONE, joins Alec Hogg for another discussion on currency markets. As incidents of violence and looting continue all over the country, Cilliers explains exactly how the unrest could impact investor confidence in South Africa and the economy as a whole. “It’s a major effect that will spill over into various areas,” he says. – Claire Badenhorst

Andre Cilliers on the impact of the KZN violence on the rand and the economy:

Yes, certainly. If we just look at the reaction this morning, we opened this morning around the 25 levels very early in the morning, and we now sitting around the R14.50 levels. On the dollar, there’s not been that much movement, so this is purely South African market-driven, driven locally is where the weakening comes from. So what is happening? It can only be described as looting [and] criminal activity – all in the name of defending somebody’s honour and the fact that he was sent to jail.

Investor confidence in the country will be severely negatively impacted. Everybody that was considering putting money into this country would think twice. Hot money that lies in the country – and I always call it hot money lying in the bond market – those people would reconsider their position because if you go into a period of weakening of the currency, then it’s better for them to get out of their bonds, take their dollars and run as soon as possible. So even on that end, on that side, we could see a movement of funds and that could have a negative impact on yields in the bond market.

But more than this is the negative impact on the economy. If you look at the roads that are being blocked, you see how many trucks have been burned, that’s millions and very soon can be running into billions of rands. There’s stoppages, so you know, it’s not just the damage to property and the damage to roads and infrastructure. It’s the damage that it does to the imports and exports because stuff cannot get to the harbour. It cannot get from the harbour back into… so shortages. It’s a major effect that will spill over into various areas and importers and exporters and companies and businesses will do worse. And that will impact, as I say, on the currency, and if that impacts on the currency because of the currency weakening, then your imports become more expensive, fuel becomes more expensive, negative impact on interest rates, the negative impact on inflation rates closer to interest rate increases. I can carry on. Just a disastrous effect.

I think the complexities of a modern economy are highlighted, but I think what is highlighted more is the violent culture that persists in South Africa. What’s very, very important is that this is an attack on our judicial system because you’re sitting with an interesting one. Do you now pardon the man and say, release him from jail? That’s dangerous because that involves… Your president can only pardon – that involves him in a role that he should not be involved in. If the Constitutional Court comes out and they say, okay, you know, we’ve made a mistake and we rescind your decision and we change that and you’re free to go, then the independence of your judicial system comes under attack from criminals and looters. So what’s the message that gets sent out to the investor community? What’s the word that gets sent out to consumers in South Africa? So I really want to take this further than just the complexity of an economy.

On the impact on the rand if it isn’t brought under control:

It will have a negative impact. It will have a positive impact if the government can get it under control very, very quickly. But by using the defence force, in my opinion, if you’re going to start using the defence force, then you have to declare a state of emergency in certain areas, which is a very negative one. I don’t think it can be brought under control in a very, very short period of time. I don’t think it’s a day or two. I think this is going to last a little bit longer and it will have a negative impact on the currency. I foresee that we will change our trading ranges, most probably get close to breaching the R14.15 level and the R14.05 level, and if that happens, you know, R14.70 / R14.75 is very, very easily on the cards. As I said a little earlier, with negative impacts on, for instance, the fuel price, which at this point in time runs in quite a negative figure in terms of what should be collected at the pump to cover oil price and exchange rates. So if we have a further deterioration of the exchange rate, that will be further negative on the fuel price, negative impacts on the inflation rate, but certainly negative on the exchange rate.

On what they are recommending to their clients:

Well, in terms of our exporters, you know, when the rand was down at the R13.60 levels and the R13.70 levels, we advised most of them not to jump into the market and take massive amounts of forward cover. So with where the rand currently trades, it presents them with far better opportunities than they’ve had in the last month and a half or two to take some forward cover. And we certainly recommend that, you know, even amidst this turmoil, that one should not forego these opportunities that comes your way by locking in some of the much better rates that you can get now. If you do it two and three and four months forward, then you even get the forward points in your favour in terms of the interest rate differentials between ourselves and America.

In terms of our importers, we have advised them below the R14 levels, you know, to take some forward cover, and if they did, then they would have been protected through this very quick and bad period. But even with everything going on and the fact that I said it could last a little bit longer than we expected, I would also recommend that our importers, if they have not taken cover, that they take some forward cover to protect themselves for any further adverse movement. We’re in a very turbulent time and there are products that you can take to hedge yourself against these negative movements.

On whether there are any green shoots of hope:

I think there is, yes. I think if we look at Mr Ramaphosa’s speech on Sunday, it was very good that he did address what is going on in the country. If I look at the Covid figures, then I think we are getting closer and might actually have turned on the peak in Gauteng already. We have seen over the last couple of months that there are some green shoots on the economy. So if all works out according to plan, then I think there is still some positives that we can look forward to at this point in time.