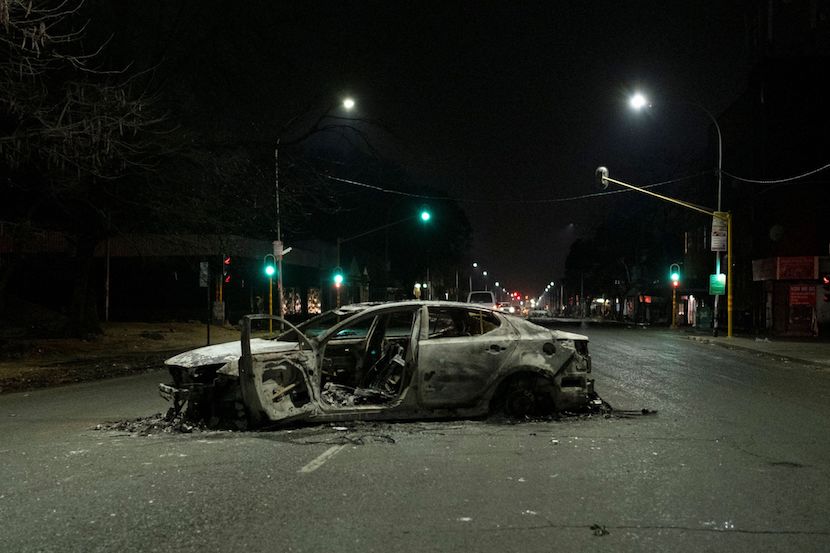 The violent protests that started over the weekend have hit many parts of KZN and Gauteng, as looters run amok with little police presence at bay (video attached for ease of reference). President Ramaphosa has deployed the army in a last ditch attempt to calm the unrest. While the protests are said to be as a result of former president Jacob Zuma’s conviction, many ponder whether starvation and a record unemployment rate are also factors at play. In the two interviews below, Mooi River businessman Donovan Carter gives an eyewitness account of the mayhem unfolding, whilst the ever experienced David Shapiro expresses his concern at the loss of foreign investor confidence in South Africa. – Justin Rowe-Roberts

(Bloomberg) – Violent protests have dealt a body blow to South Africa’s efforts to rebuild the economy in the wake of the coronavirus pandemic and pose the sternest test yet to President Cyril Ramaphosa’s authority.

The widespread looting and social unrest that’s followed the imprisonment of former President Jacob Zuma is damaging business confidence, has disrupted key trade routes and seen businesses from banks and supermarkets to small-time traders shutting their doors. The army has been deployed to help police quell the unrest, which has claimed the lives of 10 people and seen almost 500 arrested.

“The disquiet about Zuma’s arrest is being used as an excuse for sheer, opportunistic looting,” said Busisiwe Mavuso, the chief executive officer of Business Leadership South Africa, which represents many of the country’s biggest companies. “The anarchy on the ground puts yet another nail in our ailing economy’s coffin.”

The violence erupted in the eastern province of KwaZulu-Natal after Zuma was taken into custody on July 7 to begin a 15-month sentence for contempt of court and quickly spread to the country’s commercial hub of Gauteng. The turmoil has highlighted divisions within the ruling African National Congress and the tenuous hold Ramaphosa has over the party.

Members of Zuma’s family have endorsed the violence on social media as has his foundation, which has repeatedly decried his conviction. Zuma has fanned discontent by complaining that charges against him are politically motivated, undermined Ramaphosa and dismissed claims of graft during his rule that his successor has said cost the state more than $500bn ($35bn).

“What is going on is sedition. It is a direct attack on the authority of the state. It is fuelled by the very powerful people within the ANC who are about to be sidelined,” said Mary de Haas, a violence researcher at the University of KwaZulu-Natal’s law school. They “are using the language of incitement to get people to loot businesses,” she said.

On July 10, trucks were torched in KwaZulu-Natal, leading to the closure of the N3, the highway linking sub-Saharan Africa’s biggest port in Durban to the economic hub of Johannesburg. It’s also the start of trucking routes used to transport of goods as far north as the Democratic Republic of Congo. 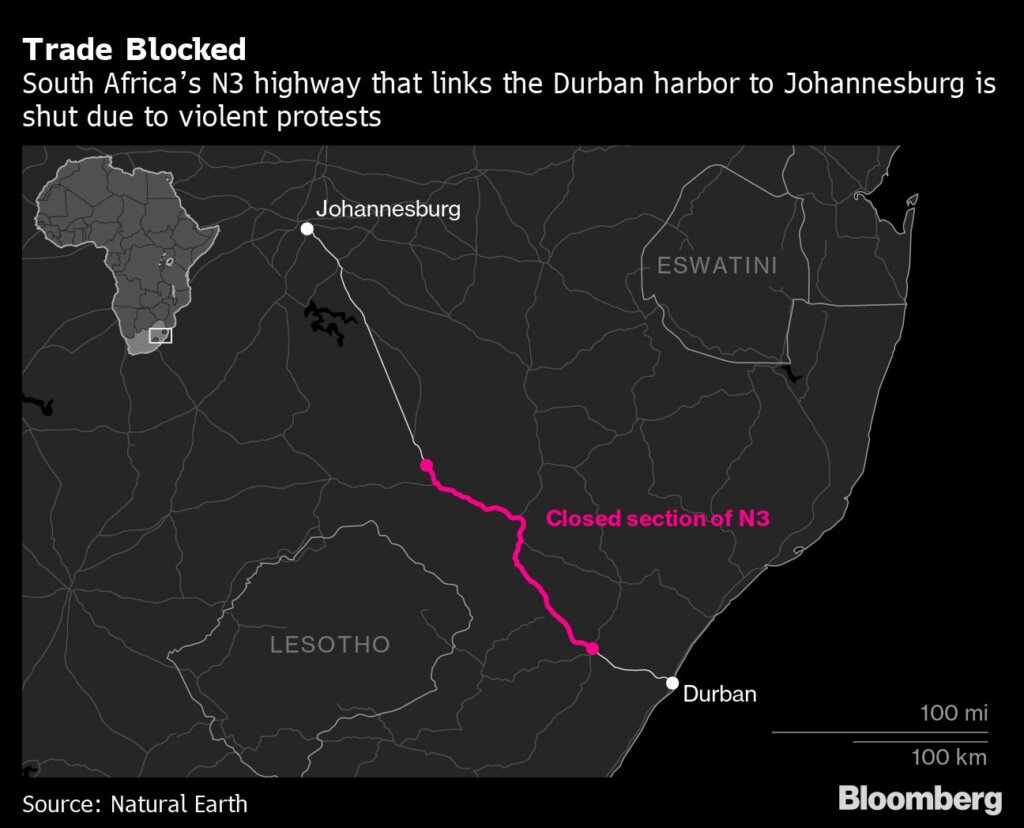 On Monday, gunshots and circling helicopters could be heard in Chatsworth on the outskirts of Durban, and residents called for barricades to be set up to prevent their properties from being looted.

More than 200 shopping malls had been looted by mid-Monday afternoon and retailers had lost an estimated R2bn, according to Mavuso.

Ramaphosa appealed for calm in a televised address on Monday night, his second in two days, and warned that the riots posed a severe threat to food security and were disrupting efforts to inoculate people against the virus that causes Covid-19.

“What we are witnessing now are opportunistic acts of criminality, with groups of people instigating chaos merely as a cover for looting and theft,” he said. “The poor and the marginalized will bear the ultimate brunt of the destruction that’s currently underway.”

“We are deeply concerned about the riots, violence and risk to people and property,” said Martin Kingston, vice president of the country’s biggest business group, Business Unity South Africa. “Business confidence is severely undermined as a consequence of these developments.”

The riots have been fuelled by years of poor government service provision, an unemployment rate that’s climbed to a record 32.6% and severe inequality that’s been seized upon by populist politicians.

“We are facing the consequences of 15 years of decline in state capacity, efficacy and efficiency,” said Claude Baissac, the head of Eunomix Business and Economics, which advises on political risk. “This is tinder for social explosion.”

Ramaphosa had difficult decisions to make. To bolster investor confidence and protect the economy, he needs to demonstrate a robust response as evidenced by his deployment of the army. But a crackdown could further fuel unrest, especially among those sympathetic to Zuma and his allies.

Already he may have erred.

Ramaphosa has twice said some of these acts of violence are based on “ethnic mobilisation.” Zuma has in the past played on the fact that he is a Zulu, the biggest ethnic group in South Africa, with his supporters at times wearing “100% Zuluboy” T-shirts.

The ANC has had a complicated relationship with the Zulu people. Prior to the end of apartheid, supporters of the Inkatha Freedom Party, a Zulu nationalist party, fought bloody battles with ANC supporters in KwaZulu-Natal and Gauteng.