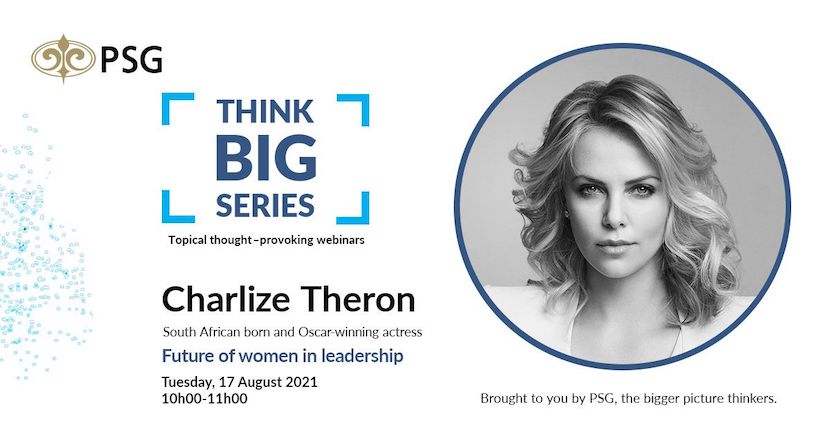 During the next instalment of the PSG Think Big Series, Oscar-winning and globally acclaimed, South African-born actress, Charlize Theron, will discuss the future of women in leadership. The free webinar is open to all members of the public and will take place on Tuesday 17 August 2021 at 10AM. Her talk follows well-received webinars featuring Capitec CEO, Gerrie Fourie and former Chief Negotiator and lawyer, Roelf Meyer.

“Our latest webinars were both very well-received and attended, and attendees found the interviews to be thought-provoking and relevant. The speakers shared powerful insights on the future of banking and South Africa’s current state of affairs, as well as what lies ahead for the Constitution. Next up, we welcome Charlize Theron, who has used her worldwide renown to advocate for women’s rights and gender equality. We value her experience and opinion as we celebrate Women’s Month in South Africa,” says PSG Chief Marketing Officer, Tracy Hirst.

Theron has been recognised by the United Nations as a Messenger of Peace, whose focal areas include the preventing of HIV and the elimination of violence against women. In the upcoming webinar, she will enlighten the audience on subjects from balancing work and home life, how COVID-19 has affected her world and how social injustice has meant hard conversations in her own home.

Hirst says that Theron is a truly inspirational story of career success, but her life lessons are what is really relevant for us all because of how we are all in some way so inter-connected. “For those looking to ‘control their narrative’, this is a webinar not to be missed.”

In the final instalment of the current series, founder and director of business and leadership transformation specialist, Beyond Binary – Mike Stopforth – will explore the future of small and medium businesses – a topical issue given the importance of small business to South Africa’s future. Stopforth is one of the foremost authorities on digitisation and a successful global speaker, author and entrepreneur.

Hirst says the good news is that post the last instalment of this series, there is more to look forward to. “We’re kicking off the next round of PSG Think Big Series on 21 September 2021, and have already confirmed Anthony Leeming, Chief Executive of the Sun International Group, and Tandi Nzimande, CEO of the Solidarity Fund, as speakers.”

Catch up on previous webinars:

The future of banking in SA: Having joined the bank in 2000 as Head of Operations, Gerrie Fourie was amongst the founding contingent. Today, he is the CEO of Capitec – the third largest bank in the country – despite its traditional counterparts having had a 100-year head start. In his thought-provoking interview, Fourie reflects on his journey as an internationally-recognised innovator in the banking sector. He also forecasts on the future of banking as well as emergent “cashless” trends and what characterises industry disruption in this competitive sector. This session is available for public viewing and can be accessed here.

The future of South Africa’s Constitution: Roelf Meyer served as Minister of Defense and Constitutional Affairs in the cabinet of former President FW de Klerk and was intimately involved in negotiations with former ANC Chief Negotiator and current South African president, Cyril Ramaphosa, which ultimately led to the country’s first democratic elections in 1994. In his webinar, he explores whether or not it is time for an economic CODESA – an overhaul of the country’s economic system. The webinar touches on hotly contested issues like land reform, the efficacy of the South African Constitution and the resilience of South African civil society. His webinar can be accessed here.

PSG Think Big Series webinars are open to all members of the public and are free to attend. Previous recordings are available via PSG’s YouTube channel.

Book your virtual seat for the upcoming discussions:

More information on the series is available at https://www.psg.co.za/news-and-publications/events-and-webinars.