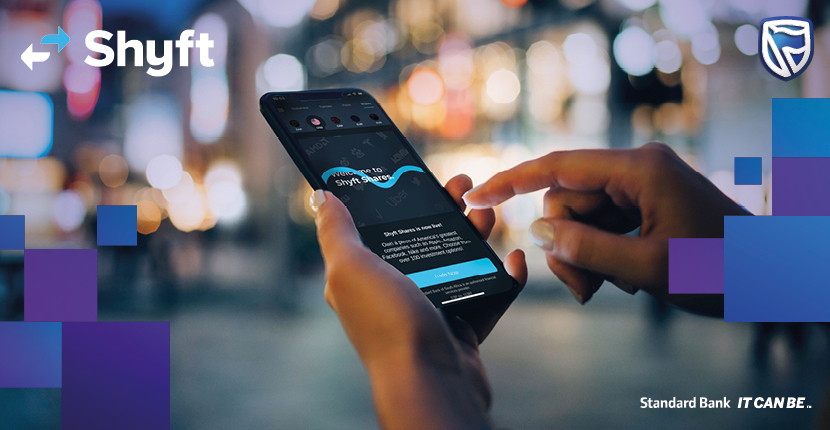 Co-founder and head of Shyft at Standard Bank, Arno von Helden, joined Alec Hogg to discuss the various benefits of the bank’s digital wallet offering. The app, which enables you to buy or exchange forex, shop online securely, and make payments across the globe, now also includes a share trading feature. According to Von Helden, what makes Shyft unique is that it lists stocks that South Africans are really interested in, and not necessarily the top stocks. “We haven’t had too many complaints about our offering so far. I think we’ve really looked at covering the vast majority of where we see customers going,” he says. “We are trying to create an offering that suits those customers’ needs and gives people options and different things. We’ve got a very flexible system, we’ve got a very scalable system, and we really want to give customers what they want in terms of instrument selection.” – Claire Badenhorst

Arno von Helden on how long it takes to sign up for Shyft:

Well, if you are already an existing Shyft customer and you just want to use the share trading feature, literally all you need is your tax number and you’re up and running within one and a half minutes, maybe. It’s very simple. Very, very easy to use, and we really, really wanted to focus on making that capability as seamless as possible for customers and for users. I think we’ve achieved that.

On how long it took to develop:

So we actually started developing Shyft back in 2016 and we started with a concept around October, November 2015. We spent 12 months developing the previous Shyft app, which was really just the foreign exchange component, the international payments component, as well as the physical and virtual card for travelling and shopping online. Then we ran it like that for two years, and then we decided, actually, there’s a bigger opportunity here and there’s more to this than just being able to travel and send money. So we redeveloped the app from the ground up and it was about June last year where we started working on the share trading feature. It took us a year to get that in and all the components, the tax components, the tax reporting obligations – all of that stuff – which was actually quite complicated. But we managed to get that all done and dusted in around 12 months. So quite happy with that.

On the number of users that have signed up:

So we have just over 100,000 users at this point in time, but we’re growing. We’re growing really, really quickly. We’re seeing our growth rates pick up quite dramatically and long may that continue. So I’m hoping that we can double that or triple that within a very short period of time.

On the advantages that Shyft offers on foreign exchange with Standard Bank as an owner:

Standard Bank is the largest dollar-rand trader in the world. So we really are a market maker in the dollar-rand exchange and that gives us a big advantage. It means that we can price a little bit more competitively. We can manage the risk a little bit better. So that was the core of our offering, was saying let’s make the foreign exchange experience for ordinary people a lot better, a lot simpler than it was before. We wanted to not just digitise foreign exchange, but actually really change the way people experience foreign exchange. That’s how we leveraged digital wallets and kind of made the ability for people to buy and store foreign exchange extremely simple with all the regulatory reporting requirements to the South African Reserve Bank.

We don’t charge anything for virtual cards, so when you make payments that are, in effect, international payments, if you use a rand card, you pay quite a lot in fees. You might not notice it but on your credit card statement, if you’ve got a £5 subscription, you’re going to pay an additional- anywhere from 2.75% to 3.5% in bank charges relating to each and every single transaction. Then on top of that, if you use your credit card, you’re exposing your credit card to potential fraud and risk. So what virtual cards do is because the virtual cards are in a foreign currency – so you’ve already done the foreign currency conversion at the low rate – we don’t charge those excessive fees, the 3% or up to 4%, and you don’t get the really bad exchange rate either. And then on top of that, you can manage the virtual card really simply, really easily. If you want to cancel your subscription, you just cancel the virtual card, create a new virtual card and use it somewhere else.

It becomes more difficult when you’re running it all off one credit card. If something goes wrong, you’re exposing the entire balance. You’ve got those additional fees. So we’ve seen, especially since Covid where we saw a massive decline last year in our physical cards because of the lack of international travel, our virtual cards offering absolutely exploded. It grew by over 1,000% last year because people were obviously moving more onto online to purchase goods and do certain things. So it’s a good offering. It makes sense financially. It makes sense from a security perspective.

Our hope is to start offering fractionals on the ETF side within the next few months and then moving that onto direct shares as well.

On the stocks they have listed:

Well, on the ETF side, we have got the S&P 500, we’ve got the Nasdaq-100, we’ve got the iShares emerging markets. We’ve got some interesting ones – some exponential growth shares, which look at some very interesting industries that are outside of the norm. Then on the actual direct shares stuff, of course, we’ve got all the big ones, you know, the tech companies, the pharmaceuticals, everything from financial services like JP Morgan, Goldman Sachs, and all the rest of it. So it’s a broader range, and like I said, we are going to be expanding that quite dramatically.

I must say, we haven’t had too many complaints about our offering so far. I think we’ve really looked at covering the vast majority of where we see customers going. At the moment, the S&P 500 is by far our most popular one. Interestingly enough, right behind that is Tesla, and considering where Tesla’s share price is at the moment, I actually would have thought that maybe people would have shied away from that, but not so. Even at $700 a share, there are a lot of people that are buying into Tesla at this point in time.

Apple, of course, also one of the very popular shares that we offer. And then some of the more interesting ones – we offer a few of the cannabis shares. We’re seeing those doing well, like Aurora Cannabis. And I think there’s definitely a sense that people are looking for things that are a little bit different and a little bit out of the ordinary. So we are trying to create an offering and a broader range of offering that suits those customers’ needs and gives people options and different things.

You know, what’s great about the way we’re set up is that we can actually add just about any instrument on the Nasdaq or the New York Stock Exchange. Certainly, we invite customers to provide us with ideas or suggestions, and we will definitely consider that. We’ve got a very flexible system, we’ve got a very scalable system, and we really want to give customers what they want in terms of instrument selection.

On being priced competitively:

Well, you know, I think that we want to be competitively priced. I think EasyEquities with the fractional shares, they’re actually slightly higher priced than we are, but we do have a minimum, which means that once you hit that range of around anything from $500 up to $1,500, that’s the sweet spot for us. Whereas with EasyEquities, you can start off a much lower base. If you want to invest $50 or $100, you can do that. You can do that with us as well, but we might not be as competitively priced at that market.

But where Shyft makes a massive difference is on the FX side of things. When you buy dollars on Shyft and your intention is to invest that in the stock exchange, it clears immediately. Once you’ve got your rands and you buy dollars, it’s immediately available to you and at a fraction of the cost of the others. And not a lot of people realise that. And it’s the same thing if you sell your shares on Shyft, if you sell your Tesla shares, you can convert that back to rands instantaneously and at a significantly better rate, you know, and then cash that out and transfer that back into your bank account. So, you know, we really pride ourselves on the fact that the FX and our FX capabilities make getting into offshore shares and out of offshore shares significantly- it’s a better experience and it’s significantly more efficient.

On who can use the app:

No, we’ve got digital KYC, which means that anybody, regardless of where you bank, can download the app and sign up for the app. All you need is your ID and the process is pretty straightforward. It takes a couple of minutes and you’ll be up and running.