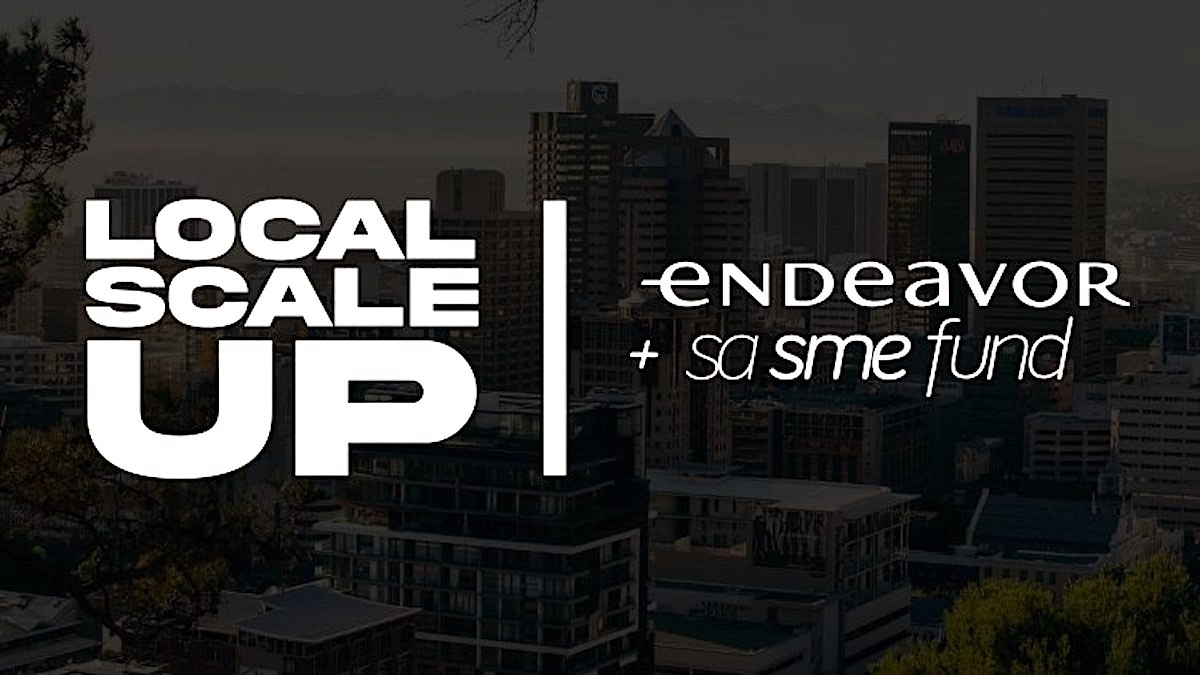 South Africa is way behind the curve when it comes to early-stage venture-backed businesses. The country has not managed to excite the global venture capital community in the same way as other African countries, like Nigeria and Kenya. To address this lag, the Local Scale Up programme was launched in 2021 by Endeavor, an international company with a local presence that promotes high-growth entrepreneurs, and the SA SME Fund. The Local Scale Up supports a cohort of early stage tech start-ups and helps them access markets, mentors and capital. The managing director of Endeavor in South Africa, Alison Collier, told BizNews the companies in the Local Scale Up have seen excellent growth and are expected to deliver R3 billion in revenue by the end of the year. Job growth has almost doubled in the last six months. The SA SME Fund’s Ketso Gordhan told BizNews about the pitfalls of grant funding and said venture capital in South Africa was about driving costs down, but in South Africa it is geared to solving crucial societal problems. – Linda van Tilburg

The Local Scale Up is here to accelerate the growth of early-stage South Africa founded tech start-ups, that is businesses generating annual revenue of R2 to R10 million. We, Endeavor, have partnered with The SA SME Fund to establish this program to accelerate these start-ups’ growth. Endeavor’s belief is that these high growth entrepreneurs are really key to driving job creation and revenue growth in an emerging market such as South Africa and to stimulate the economy. The partnership works very well, as the SA SME Fund have a similar mission to ours, which is to stimulate this high-growth entrepreneurial sector so as to deliver sustainable economic growth in SA. We accelerate the growth of these start-ups in three areas: market access, capital access and on-demand tailored mentoring. Firstly, to accelerate their growth we support with market access, both locally and globally leveraging Endeavor’s global network – we’ve offices in 40 markets, +5000 mentors, +2000 entrepreneurs. Secondly, we assist with access to capital, again either locally in South Africa or internationally, as per the businesses’ needs. And then lastly, on-demand business mentorship. This is advice from entrepreneurs or business leaders who’ve ‘been there and done it’, whether here in South Africa or internationally, and then sharing the learnings to assist the Local Scale Up businesses to avoid some of the pitfalls that exist as you grow your entrepreneurial business.

18 months later and the companies are thriving, creating jobs for black youths and attracting capital investment

In 2021, we kicked off the Local Scale Up with 15 businesses, now 20 months later the cohort has doubled in size to 30 businesses given the early success of the program and the growing number of high-quality SA founded tech start-ups. The revenue and job growth has been excellent – as has far exceeded our expectations – proving out the Endeavor accelerator model. In 2021, the cohort achieved revenue growth of 61% on a simple average basis and in the first 6months of 2022 the growth rate is running at an impressive 300%. Collectively the 24 businesses that’ve been with us from the beginning of 2022, are expected to deliver close to R3 billion in revenue by year end, up from R2 billion in 2021.

Then jobs-wise, which I think is more exciting for us in South Africa given the extent of our unemployment. In 2021, the LSU cohort delivered 98% annual job growth, and for the first six months of this year, it’s tracking at 57%. What does that mean headcount wise? It means by the end of this year we’re forecasting 4,000 people to be employed in by these businesses in total and that’s up from 2,900 last year. So, an additional 1,100 jobs in this year alone from only 24 teams, and 75% of the new jobs are filled by black youth. So, it’s creating jobs for the youth, where we specifically have an unemployment problem. And finally, the capital these businesses have attracted is up fourfold over the past 18mths. Teams are raising this equity capital from both local and global venture capital funds.  In 2021, these businesses raised approx. R300 million and we expect the cohort to raise over R1.5bn by the end of 2022. R1 billion has already been raised this year, so they are doing well.

Companies that rely on grant funding have generally not performed – Gordhan

In South Africa, we are way behind the curve and we can see the future impact of these things if we do it really well by looking at what happened in the United States. In the United States today, almost one in five jobs in their entire economy come out of companies that were created in the last 25 years. We want to make the argument that if you’re going to get something right in South Africa, it’s going to be supporting and creating an ecosystem that allows for these entrepreneur led, tech enabled businesses to thrive. That’s why we’ve put our money where our mouth is. We have funded and supported the scale up of 130 businesses. We’ve put capital at work in six venture capital funds, many of which have invested in the businesses that Alison was referring to now.

And to be slightly controversial, what we’ve seen in the South African market is that companies that rely on grant funding have generally not performed because the accountability is just not there. We’ve seen government spend hundreds of millions of rands a year trying to support these businesses but because it’s a grant, the requirement to repay the money is not there, the performance in the company is not there. I think that one of the reasons venture capital has been successful is that people are taking high risk, but they expect a risk- adjusted return, and therefore these businesses typically perform incredibly well where a VC fund manager knows how to add value.

One of the companies that has been through the process with Endeavor is called FlexClub, and it’s a South African entrepreneur, who developed a model for helping Uber drivers who couldn’t buy vehicles, get access to vehicles. After a while they realised that what Flexclub was sitting on was a technology that could be scaled to many other industries, including the rental industry. Then they identified that Mexico has similar features to the South African economy, took the business there and has raised many rounds of capital. One of our venture capital funds, Digital Africa Ventures, has invested into FlexClub. So, it gives you a good feel for the possibilities with these tech start-ups because it started as a very small idea and today it’s now probably worth somewhere between R500 million and a billion in the VC market. – Gordhan

So, the example that I wanted to call out was Aura. It’s a private security platform that links all of the private security providers together on one platform. So, for you, the user, it doesn’t matter where you are located across in the city, in Johannesburg or Cape Town or in many of the metro township areas where they’ve also got coverage, you then use whatever app you are linking through your insurer and then in an emergency situation you will have access to the private security that’s not necessarily linked to your home, but rather the closest private security vehicle to you anywhere in the country. So, just a few examples of how we’ve supported Aura when they were looking to get into the townships in South Africa. The most effective way for them to move into that market was through linking to the spaza shops, because the spaza shops have got a very high security risk. We introduced them to another Endeavour entrepreneur, the Hello Group. HelloPaisa have largest presence across South African townships and spaza shops with supporting remittances and facilitating payments for their spaza shops. With this partnership between Aura and Hellopaisa, every spaza that uses HelloPay now receives the private security protection for emergencies that’s provided to them through to Aura. – Collier

We started at the beginning of last year with 15 businesses, now 18 months later, there are 30 businesses in the cohort. We’re seeing a groundswell of South African founded, tech enabled businesses that have developed solutions that are ripe for the African continent, or alternatively the very large markets internationally – the US and Europe.  Secondly, the rand continues to weaken versus the major currencies making the cost of employing tech dev and operating teams in Rands in South Africa relatively cheaper. South Africa has highly skilled tech dev teams, and it’s a great business model to have your operating teams based here in South Africa and to sell your tech solutions to customers in the US and EU – markets with long runway and offering earnings in hard currency. That trend is not going away, plus digital innovation is accelerating, given consumers’ growing demand for digital solutions. Given this, we foresee accelerated growth of the number of South African founded tech entrepreneurs that will serve the global market leveraging South Africa based tech dev team and operations. South Africa is a wonderful market to set up shop and serve the world from here.

What’s interesting in Africa and South Africa about the venture capital industry is that in America, a lot of the start-ups were about driving down costs or driving up efficiency or changing the way in which the service was delivered. So instead of picking up the DVD, you got it on Netflix. Whereas in South Africa we find that a large number, probably the overwhelming majority of start-ups are solving a very real problem and making a meaningful impact, not just in jobs and revenue, but also in helping to solve crucial societal problems and increasing our ability to educate or grow food or develop new industries. So, for us, VC is not just about jobs and revenue, but is also about solving crucial problems.