South African born Elon Musk has ventured into areas where others have feared to tread. His SpaceX operation was launched at a time the Russian and US governments dominated. While Tesla is disrupting the vehicle market, and this progression has been boosted by the VW scandal. He’s had the tenacity to take on the giants of industry and Investec’s Roy Topol looks at his ever expanding empire. Topol wonders if Musk will one day be sitting alongside the innovation greats like Steve Jobs and Thomas Edison. – Stuart Lowman

South Africa’s own Elon Musk has a story that is not only impressive as an entrepreneur, but also as someone who is tackling some of the world’s biggest technology issues – from space travel to renewable energy – issues that could determine the course of humanity. At the very least, he looks set to go down in history alongside great entrepreneurs / innovators like Jobs and Edison.

Move over Peter Parker and Clark Kent, because we have a real life superhero who is single handedly saving the world. Hyperbole aside, born and bred South African Elon Musk has achieved international fame and fortune in such a short space of time that arguably no non-American has achieved previously at such a tender age. Starting with a $28 000 loan from his father, Musk has managed to turn this into a fortune north of $10bn in less than 15 years and is now regarded as one of the top entrepreneurs and visionaries in the world. He is arguably changing the face of the planet (and possibly even the solar system).

Leaving the sunny shores of South Africa after matric when he was 17 years old, he studied in Canada and the US before joining Silicon Valley as a youngster in the late 1990s tech boom. He and his brother started a company called Zip2 which was an online version of the Yellow Pages with a satellite navigation tool that helped people to search for and find business directories in the US. He sold it to Packard in 1999 for $307m, netting $22m for himself.

He then put $12m of that back into his next business, X.com. X.com was one of the early internet payment businesses in the world, which eventually merged with PayPal where he became the largest shareholder in the merged entity. PayPal listed before being bought out by EBay for $1.4bn, with Musk receiving $250m in 2002. By then, he had gained worldwide fame and an immense fortune, but that was not enough for Musk. He started a company called SpaceX, which is one of the largest manufacturers of space rockets in the world. Musk piled around $100m of his fortune into SpaceX. While forming SpaceX, he started funding a small venture cap firm called Tesla (named after the famous inventor, Nikola Tesla). He became the largest shareholder in Tesla before taking the reins.

SpaceX seemed liked a distant dream when Musk launched the company 13 years ago. In a market dominated by the Russians and NASA, SpaceX was facing the seemingly impossible task of trying to compete with superpowers. But compete SpaceX did, with the first privately funded company to ever successfully launch a rocket into orbit, in 2008. Since then, SpaceX has continued to pierce the world’s barriers, creating ground breaking rockets and continuing to win NASA and other contracts. This year SpaceX raised $1bn in capital from Google and Fidelity, valuing SpaceX at $12bn. Musk remains the largest shareholder in SpaceX.

Tesla almost failed on several occasions, with Musk at one stage down to his last few million dollars before a last minute financing round on Christmas eve in 2008 (at the height of the credit crisis) allowed Tesla to survive. Tesla not only survived, but thrived over the next few years, with the launch of the Tesla Roadster causing something of a revolution in the US. The launch of the Tesla Model S sedan in 2012 put Tesla into the fast lane, with over 75 000 vehicles being sold in the following three years (there was a waiting list of over a year for the car). The Tesla Model S was the first superfast electric car, with its supercharged electric motor powering the car from 0 to 100 kph in 4.2 seconds. Electric cars, for the first time in history, became the car of choice for many of America’s super rich. In addition, Tesla revitalised the American car manufacturing industry. Tesla currently has a market cap of $33bn, putting Musk’s shareholding in Tesla at more than $7bn.

While growing SpaceX and Tesla, Musk’s Pretoria-born cousins, Lyndon and Peter Rive, were looking for an idea. Musk told them that he thought there was an opportunity in the solar sector and in 2006 funded their venture, SolarCity (Musk is now the largest shareholder in SolarCity with a 21% shareholding). By 2013, SolarCity became the top residential solar installer in the US. In 2014, SolarCity started to manufacture its own solar panels, giving it full control of the value chain and further providing economies of scale for the industry. SolarCity’s market capitalisation sits at almost $6bn, with revenue growth of 67% reported in its last quarter.

Today Musk is the largest shareholder of three large American businesses and is CEO of both SpaceX and Tesla. SpaceX is today by far the lowest cost producer of rockets and a big supplier of rockets to NASA. Tesla is the world’s leader in the manufacture of high-end electric cars and a revolutionary force in a massive industry. SolarCity is the most valuable solar energy company in the world and holds a dominant market position in the US solar industry.

In short, Musk is changing four industries through his companies: rocket manufacturing and space exploration, electric car manufacturing, battery production and solar power generation. And he is doing it in a way that is almost beyond comprehension and certainly unprecedented. Musk’s ability to attract America’s top engineering talent through SpaceX and Tesla is quite remarkable. But perhaps his insatiable desire and admirable goals are what separate him from the rest. He has a unique ability to set goals and rally his troops towards achieving these goals while pushing the boundaries (in more ways than one).

Furthermore, he is now mixing two of his fields of expertise (solar power generation and battery storage) with the launch of his PowerWall, in that way finding a solution to the storage problem of solar energy. The PowerWall has the ability to store several days of solar energy in its battery, essentially giving solar energy the ability to store away power during days of little sunshine. Solar power, combined with his PowerWall, could revolutionise the entire electricity power generation industry – giving people the ability to remove themselves from the grid. As soon as it reaches a tipping point where the economies of scale swing in his favour, the consequences for the energy industry (and indeed the entire world) are immense. Think of the extent to which the global carbon footprint can be reduced and you get an idea of the potential impact of the technology.

“The American Dream” is the well-known ethos of the American people. But very few Americans really understand the impact that the American capitalism model can have, in enabling people to reach this dream and benefit the world at large. Musk came from the tip of Africa as an immigrant, and took the proverbial bull by the horns to not only create a fortune for himself, but change the world for the better, in arguably a way that no man has before. Still in his 40s, he may end up becoming one of the richest and most powerful men in the world.

Musk’s goals are vast and, for most of us, seemingly overambitious. Create a super-fast electric car. Power the world with green solar technology. Wean the world off fossil fuels. Shoot rockets into orbit. And perhaps the craziest of all – colonise Mars! But I guess, as Steve Jobs proved before him, only the ones who are crazy enough to believe that they can change the world, are the ones who do.

Zip2 is a web service providing business directories and maps to ecommerce companies. Musk started with a $28,000 investment; his exit value was $22m.

Musk’s expanding empire (size of bubble refers to Musk’s approximate equity in each): 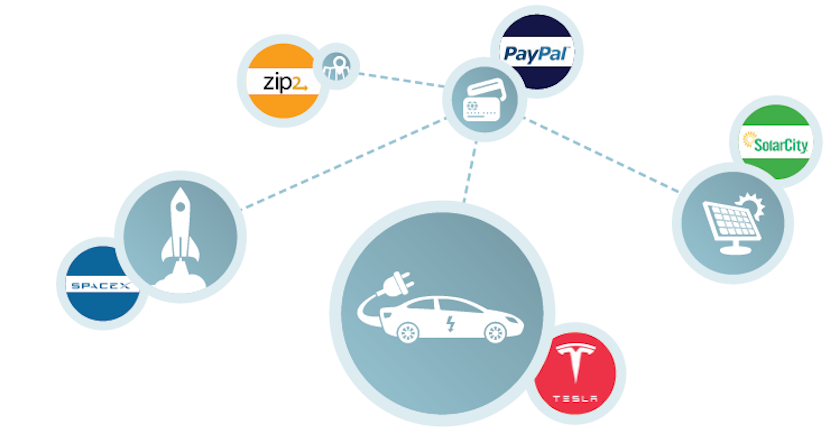