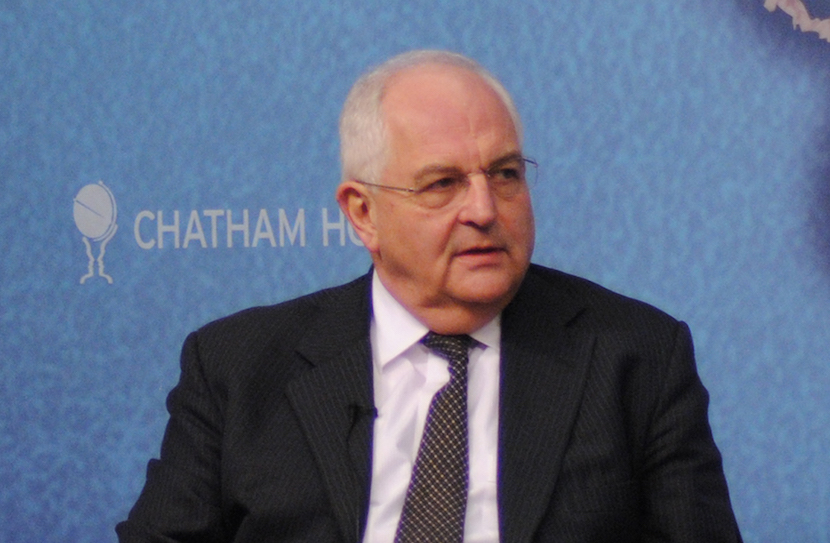 South Africans can never say they haven’t been warned. Oxford don RW Johnson’s best selling book argues the country has between two and five years before it collapses. This morning an even more powerful voice rang louder alarm bells – on the international stage this time – with a brilliant assessment of the country’s travails. Global thought leading economist Martin Wolf concludes in today’s Financial Times of London that the country has three options – only one of which will avoid what he terms “an inevitable populist disaster.” After a decade and a half away from the country, Martin Wolf came to South Africa last week, presumably to have a first hand look at what’s happening and to offer some suggestions. His conclusions are stark: with Jacob Zuma at the helm, Wolf worries that it may already be too late for the country to avoid the destination it is being driven towards by “political entrepreneurs”. Wolf argues that following the China model of creating a new economy around the old one is the only way to avert the nation’s impending fate. That would require the kind of courageous political leadership so lacking of late. Hope springs. There are many rational thinkers within the ruling ANC. They are starting to be heard. But it’s time their whispers are ratcheted up into a crescendo. – Alec Hogg

Last week, I visited South Africa for the first time in 15 years. In 2000, when euphoria over the transition to democracy gripped the world’s imagination, I was concerned that the economic challenges would prove overwhelming. Only brave, skilful and honest leadership could deliver a successful future. Inevitably, it has fallen short of these requirements. A downward spiral of populism and declining performance looms.

Edmar Bacha, a Brazilian economist, applied the label “Belindia” to his own country in the 1970s. Belindia combines Belgium, a small and rich modern country, with India, a large and poor one. Apartheid South Africa was even more Belindia than Brazil: a small, white rich country within a large, black, poor one. Whites lived even better than in Belgium, since they could hire cheap servants from their own India. South Africa was the second most unequal economy in the world, after Brazil. But the racial injustices that drove this inequality were vastly more poisonous.

This legacy of injustice has duly shaped post-apartheid South Africa. 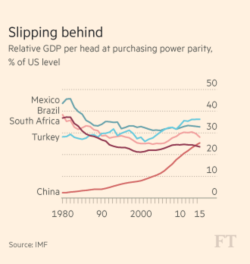 Members of groups previously excluded from South Africa’s Belgium promptly entered it. This reduced inequality between whites and blacks, while increasing it among blacks. Yet today, pre-tax inequality is as high as 20 years ago. It is also the world’s highest. The inhabitants of its Belgium are also taxed more heavily, in order to transfer income and resources to those in its India. Public spending has doubled over the last decade in real terms, with particularly large rises in education, health and social protection. Access to electricity, water and sanitation has much improved. Despite the Aids disaster, life expectancy has risen to close to 60 and infant mortality has fallen sharply.

These choices were both inevitable and right. But neither insertion of a favoured few into the modern economy nor the transfer of resource to the rest can solve the country’s problems. Worse, it cannot even continue on its present path. The potential rate of economic growth is down to 2 per cent. There is a structural fiscal deficit of close to 4 per cent of gross domestic product, while government debt has risen from 22 per cent of GDP in 2008-09 to 44 per cent this year. At 33 per cent of GDP, government spending is high for a middle-income country.

Within the bounds of prudence, the largely zero-sum redistributive policies of the early democratic period are exhausted. So what are the options now? There would seem to be three. 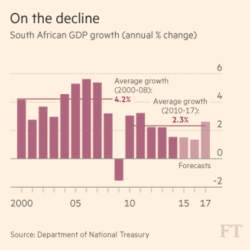 First, the country could seek to stabilise the unsatisfactory status quo. This would mean managing the political fallout of a slow-growing and unequal economy blighted by mass unemployment and racial inequities. Worse, groups with the most votes would have the worst deal. This cannot be workable.

Second, politics could take an evermore populist turn, as politicians make promises of a better life to the discontented at the expense of the still contented. But this would make policy increasingly negative-sum: losses imposed on the successful would exceed gains for the less so by an ever-rising margin. Zimbabwe has demonstrated the folly of such an approach. But political entrepreneurs will choose it. Julius Malema of the opposition Economic Freedom Fighters is already doing so. The government will meet the threat by raising its own bids.

The third approach would be to adopt policies for faster, employment-generating growth. Harvard’s Ricardo Hausmann notes powerfully that “if South Africa had a labour force employment ratio similar to Latin America, employment in South Africa would be higher by 66 per cent”. This shows how far South Africa is falling short of what is needed. But faster growth of today’s modern economy, even if feasible, would never generate the jobs the country needs. 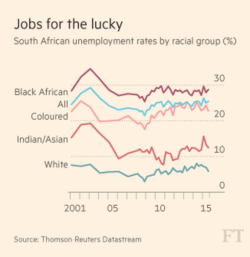 Fifteen years ago, I argued that the least bad option would be to allow the Indian parts of the country to develop under appropriate prices (including low wages). To accelerate growth there, the government would need to focus investment and subsidies upon it. One possibility might be to turn parts of the country into free economic zones. In essence, South Africa would do what China did under Deng Xiaoping: build a new economy around the old one.

The question, however, is whether it is still possible for politics to shift from an increasingly negative-sum orientation to a positive-sum one. The gains from growth must go to the disadvantaged. That is evident. But for that to work, there must be not only more growth, but also the right kind of growth.

The present difficulties of the economy, notably the collapse of the rand (down more than a fifth in real terms since 2010) are even an opportunity. This should improve the profitability of production for exports (including of tourism services). It would be wise for South Africa to follow other countries and intervene in foreign currency markets, if necessary, to keep the exchange rate competitive. Fiscal policy should be used in support of such a strategy.

These are, however, just details. The fundamental point is that if the country does not shift to a path of faster, employment-generating growth, the populist disaster seems increasingly inevitable. It may be too late to make the needed switch, particularly with President Jacob Zuma at the helm. But the stagnation and high unemployment of today are a politically unsustainable combination. Change will come. Let it be in the right direction.