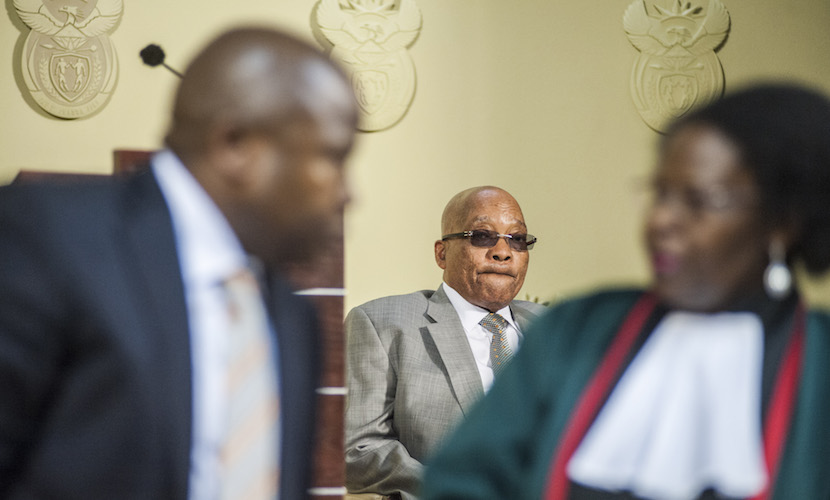 Allowing financially illiterate President Jacob Zuma to impose his ideas on South Africa’s fiscal policy is akin to handing a practicing alcoholic keys to the booze cabinet. In both instances, the consequences in terms of money and general misery is sure to be high. Leading independent economist Azar Jammine has done the numbers and estimates Zuma’s firing of respected Finance Minister Nhanhla Nene has raised the country’s debt servicing costs by between R1.5bn and R2bn a year with more to come. Add in the wipeout on the stock market, the plunge in bond prices and the smashed currency and the decision has cost the country at least ten times than. Like the upgrades to Nkandla and his proposed R4bn jet, Zuma appears to have no conception this is not actually his money to waste. Or perhaps he simply doesn’t care that the State’s income is reluctantly contributed by taxpayers and belongs not to politicians and their cronies, but to the country as a whole. A rational brain would have absorbed the lesson provided by Gauteng’s 90% boycott of eTolls. Some people, clearly, are very slow learners. – Alec Hogg

Following the shock announcement by President Zuma on Wednesday night regarding his intention to redeploy Finance Minister Nhlanhla Nene to another position and to replace him with David Van Rooyen, the latter took the oath as new Finance Minister in Parliament yesterday.

He followed this up with a small speech which unfortunately, but understandably, seemed to rile the markets still further.

Even as the Rand had depreciated sharply following the announcement of the reshuffle of the Finance Ministry on Wednesday night, it suffered a renewed bout of selling following the speech. Having traded for much of Thursday morning just above the R15.00 level, the South African currency plunged to a new all-time low of R15.38 to the Dollar, before rallying marginally.

Van Rooyen’s speech apparently did not impress. Having seen snippets of the speech, one can sympathise. Much of it was devoted to making the Treasury more accessible to the people. Little was said about continuing the commitment to fiscal discipline pursued by his predecessor.

The combination of the content of his speech and what was not said has understandably created a lot of uncertainty as to whether or not the historical path of fiscal discipline will indeed be adhered to by Treasury under Van Rooyen’s leadership in the future.

One is tempted to suggest that with the strength of intellectual power at Treasury at present, Van Rooyen will not be allowed to get away with an unconstrained fiscal plan. However, what worries the markets is the uncertainty of whether or not indeed there will be a shift away from fiscal discipline.

Even if at present most officials in Treasury might be adopting a very responsible approach, one cannot guarantee that that will necessarily continue. It is this anxiety that is likely to keep the Rand under downward pressure over the next few months at least.

Unfortunately, the reality is that the economic costs of the interpretation of the switch in Finance Ministers, is already manifest.

One of the big concerns regarding the latest development is that ratings agencies will continue to downgrade South Africa’s credit rating. Specifically, S&P, which has assigned the lowest possible investment grade credit rating to South African debt, but now with a “negative” outlook, could well downgrade its rating to junk status on the basis of these latest developments.

In turn, the concern associated with such downgrades is that they would raise the borrowing costs of government in funding its fiscal deficit. The reality, however, is that the movements on foreign exchange markets and long-term interest rates in the wake of the announcement, already stand to exact a high cost on the economy and its government.

The interest rate on the highly traded 11- year government bond, the R186, soared by more than 1% following the announcement. Prior to the announcement the R186 yield had already moved up in recent weeks from around 8.2% to 8.8%.

Some would argue that this took place in anticipation of a downgrade in the country’s credit rating which did indeed materialise. However, the yield soared on Thursday by more than 1% above the latter level. At one point, the yield on the R186 bond exceeded 10% for the first time in five years.

Part of this rising long-term interest rates was attributable to the increase in the probability of a further downgrade in the country’s credit rating.

Secondly, the inflationary expectations implicit in the knock-on effects of a 10% real depreciation in the value of the Rand since August, are likely to force the Reserve Bank into raising short term interest rates early next year and this has fed through into exerting upward pressure on the longer term interest rates at present.

When the 1%-plus increase in long-term interest rates is applied to a budget deficit of R159bn in the current fiscal year, one recognises that debt servicing costs emanating from the increase in bond yields, could amount to between R1.5bn and R2bn already purely as a result of the disenchantment of markets with the political outcome.

The relevance of this is that government will now have this amount of money less available to devote to social upliftment and development.

As an example, when the discussion about free tertiary education was mooted, the Minister of Higher Education, Blade Nzimande, suggested that such a policy would be unaffordable as it would cost R19bn.

In one fell swoop in a matter of days, government has raised its own expenditure through the potential increase in its debt servicing costs, in such a way as to exhaust the same amount of money as the increased cost of interest could absorb each year.

Populist Policies See Their Demise In Argentina And Venezuela

A further issue upon which to reflect in the context of this discussion is the long-term cost of the adoption of populist policies.

It is all well and good to argue against the maintenance of fiscal discipline in the belief that the economic costs of such a straitjacket are imposed upon by “Western” capitalist mindsets and associated ratings agencies.

In two specific meaningfully emerging markets, viz. Argentina and Venezuela, fiscal discipline has been abandoned over the past decade. Inflation rates have soared to double digit levels in Argentina and to 150% in Venezuela.

The size of these economies as measured in terms of GDP, has been contracting massively as a consequence, with huge increases in poverty and unemployment.

We ourselves have been involved in debates with leaders of the EFF regarding the merits or otherwise of adopting the types of policies pursued by the Chavez government in Venezuela.

EFF leaders have argued that by nationalising the country’s oil industry, the Chavez government succeeded in redirecting the proceeds of oil revenues into the upliftment of the masses.

This may have worked when oil prices were elevated, but has come at a huge cost in the wake of the fall in oil prices more recently. But in the case of Argentina and Venezuela, the populist governments have been voted out of office.

The lessons are there for all to learn. We hope new Finance Minister David Van Rooyen has kept abreast of these developments and understood what the implications of such policies can turn out to be.