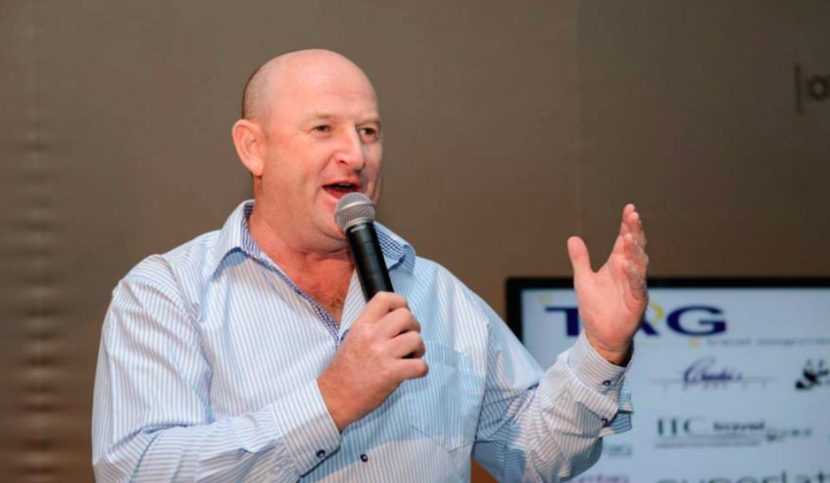 Former CNN and 94.7 sportscaster Graeme Joffe has been fearless in his expose’s about corruption in South African sport. And as much as he wants to stop he says things are only getting worse, and the media cover ups aren’t helping. But in doing this he has ruffled, and will continue to ruffle some powerful feathers – which is the reason he fled for his life in the dead of the night. In his latest piece Joffe’s asking why sports minister Fikile Mbalula is still silent on the rugby issues but he’s happy with the way Cricket SA is “handling” the match fixing scandal? This after South African Rugby Union CEO Jurie Roux received unanimous support in continuing his role, despite the cloud hanging over his head. Another fascinating read. – Stuart Lowman

I keep wanting to stop the exposes and move on with my life after four years of digging and entertaining threats. But then my inner mind says, how can you stop when things are only getting worse in SA sport and all you really see in the media are cover ups and lies from the dirty officials?

“The Executive Council of SA Rugby is pleased to announce that Jurie Roux retains its unanimous support to continue in his role as the organisation’s CEO, confirming a decision the Council had first taken in 2014.”

A spineless Executive Council and you have to ask what is buying this support.

Are the unions getting unauthorized payments and just how much dirt do they all have on each other?

Two legal minds, paid by SARU were asked to review the matter. They found the Executive Council had “appropriately applied its fiduciary duties and also advised that it would be an unfair labour practice to take action against an employee on perceptions of third parties or on the basis of a report of which the facts had not been tested in court.”

Roux’s lawyer, Frikkie Erasmus said his client wants to clear his name but it may be two years before the University of Stellenbosch scandal goes to court. If he really wants to clear his name, why not open the SARU books for a forensic audit and then we’ll see just how clean the CEO and some of his cronies really are.

“They are blaming Andy Marinos for the “supplements” leak. All levels of national side use these Bok pulse supplements as it is endorsed by SARU. French company financed. First and foremost what you need to understand is everything goes through Frikkie Erasmus. He is their firewall. All front companies get created by him and all the “dirty” money from competitions, software, contracts, sponsorships etc. filters into those company accounts and it basically untraceable. For example, SARU is busy with software to assist coaches. The union invested heavily in this software the last couple of years. Developer is paid by SARU which the developer in turn pays a “front” company for “intellectual property.” All corrupt stakeholders make money which majority of the funds actually comes from government to advance transformation. Another example, contract gets negotiated, when a certain agencies players get Springbok contracts it gets inflated whereby commission is again paid into a “front” company. Started at Province where average players were getting R2.5m annual contracts, obviously players contracted to a certain agency.”

Meanwhile, Business Day columnist, Mark Keohane who has his fingers in a number of rugby pies sent this text message to a former Bok coach on 22 February 2016. 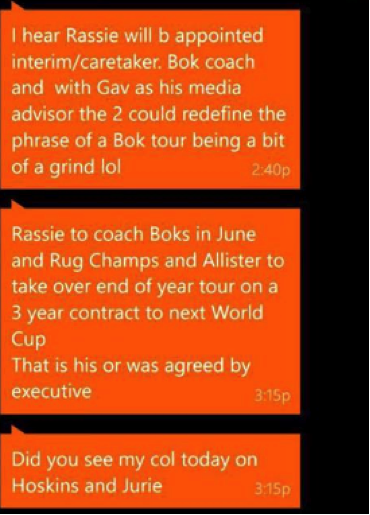 So, the executive had made up their minds despite saying they hadn’t. Or was Roux still making the decision?

Rassie Erasmus was going to be the next Bok coach with SuperSport rugby writer, Gavin Rich as his media advisor.

However, that was all scuppered when someone intervened and from Rassie’s criticism of Oregan Hoskins earlier in the week when he announced that he was withdrawing from the race, you get the feeling it was the SARU president’s intervention.

Rassie was banking on the job but ‘withdrawing from the race’ was just more spin. There was no race.

Keohane and Rich go back a long way and “grind” is an interesting reference to cocaine?

Back in 2001, there were allegations: “Axed Springbok rugby star Rassie Erasmus is to launch a private prosecution against the person spreading rumours about him snorting cocaine.” – IOL

I also received an email from Eugene Henning, the Managing Director of MyPlayers, which stated:

“Your article in Biznews alluded to the activities of the players organisation is factually incorrect. The exclusive use of the collective commercial rights of the players are granted to the Player Trusts. The same entities receive payment for these rights. There is no payment from Saru to MyPlayers and the statement that R90m is paid is wrong. No member has ever been denied access to financial statements. Louis von Zeuner was appointed as chair of MyPlayers by the MyPlayers board – SARU had no involvement in that. SARPA is entitled to appoint one member to the SARU Exco and appointed Louis in this position. The players board meets quarterly and a thorough discussion on all information gets done. The board is supported by an audit and risk committee and the chair of the committee is a player. As per our e-mail invite of 25 Nov 2013, we again wish to invite you when convenient to visit our offices where I would like to share information with you to understand the workings of the players organisation. You can also put forward your concerns to the representative group of approximately 20 players at their next meeting on 30 March 2016.”

Firstly, R90m is being paid by SARU for Collective Commercial Rights. You say it is paid to a trust. My Players manage the distribution of the R90m. Who gets paid what? How is it worked out?

Distributing some income is not a major job. Why are SARPA not distributing?

In terms of the Companies Act, any person who holds any shares in the Company is entitled to receive any annual financial statements of the Company without having to make a demand for it. In other words the Company must send the information to these persons, they should not have to ask for it.  Big Companies publish their annual financial statements either in brochure form or in the newspaper.  If it is published, then the shareholders should be warned in advance of the publication date.  If it is printed, then the shareholders should receive one copy thereof without being charged for it.

Henning’s response to my reply was just one line.

“My comments to you are based on what is contractually agreed on and signed off by the parties.”

So, why is Fikile Mbalula still silent on the rugby issues but he’s happy with the way Cricket SA (CSA) is “handling” the match fixing scandal?

Mbalula’s transformation talk is suddenly on the back foot with Gulam Bodi, Thami Tsolekile, Lonwabo Tsotsobe and Alviro Petersen the names that they’ve linked to the investigation so far.

Petersen may have been the whistle-blower and if that is the case, he needs to be commended.

But with those names being bandied about, it could explain why Mbalula has been so quick off the mark to have closed door meetings with CSA.

What I still can’t understand is that if CSA knows:

Why did they not set a “Bodi trap” to catch the Indian betting syndicate – that would have been the big coup and good for world cricket?

It still smacks of a cover up!

How about a King Commission to get it all out in the open?

Then Mbalula weighs into the Aaron Phangiso illegal bowling action story with no clue whatsoever.

“All this should not serve as ammunition to those who continue to slow our transformation objectives.”

The “Gupta appointed” Mbalula is part of the problem in SA sport.