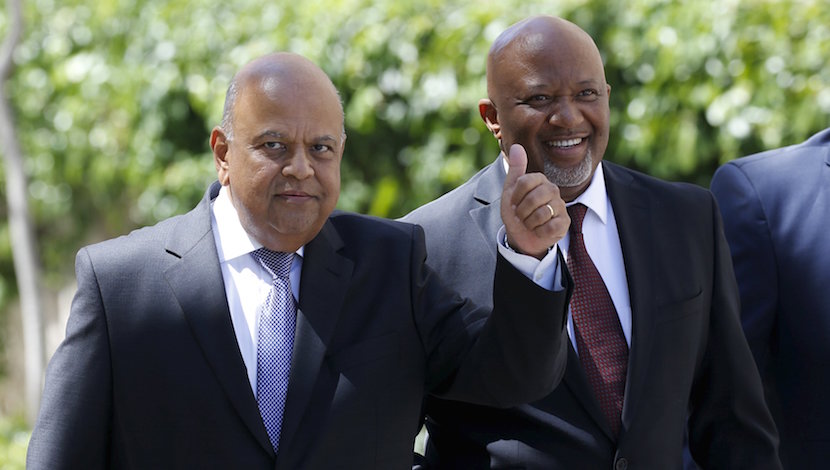 South African born and raised Simon Lincoln Reader possesses a couple of unique advantages. He mixes in the right circles within one of the world’s major financial centres to has access to the inside story. And with the benefit of distance, Reader is not distracted by noise that comes when you are too close to the action. After his excellent piece on Pravin Gordhan’s recent roadshow, we pressed Reader into providing insights into how the City of London interprets Pretoria’s latest political furore. The conclusions are chilling. Those controlling massive money flows which provides the oxygen for developing country growth, are without emotion. They are sceptical that South Africa fully appreciates threat to its sovereignty. And believe its failure to deal decisively with now clearly identified perpetrators of Nenegate sows the seeds for another 9/12. That, the thinking goes, will accelerate what they see as the inevitable bankruptcy and IMF bailout. Rarely in life does one get so binary an option as the one the ANC’s National Executive Committee faces over the weekend. Sweep the evidence under the carpet and fulfil the forecasts of London screen jockeys. Or act decisively and trigger an alternative future. Now that membership has insight after public disclosures from Vytjie Mentor and Mcebisi Jonas, the rational choice, clearly, is the second option. – Alec Hogg

In anticipation of Pravin Gordhan’s investor roadshow to Britain and The United States, I was eager to hear whether the conduct of the Hawks and SARS had caught the attention of London. I received several replies from Square Mile commentators that I coupled to form what I believed were the investment community’s expectations of the Finance Minister and his assembled team. What emerged was an expression of a divide with consequences between two compromised moral compasses: the City and Jacob Zuma.

To understand just how powerful the City is, one only has to note what is has survived. In 2008, the Labour government intervened to save institutions such as The Royal Bank of Scotland, Lloyd’s TSB and HBOS from collapse. It withstood the European contagion of the global financial crisis thanks to the taxpayer, something it is frequently accused of being impervious to and will unlikely ever be forgiven for. It has weathered riots, investigations and commissions, condemnation from the Church and the European Union, outrage at its bonus culture, The Occupy Movement and LIBOR rigging. Compared, Zuma’s supporters would argue his multiple indiscretions are decidedly inferior.

Zuma’s offense at capitulating in December was underestimated. War runs through his blood; this was an attack on his place in the world, his family, Nkandla and those abandoned by education, technology and prosperity, their traditions ridiculed. Instinctively he plotted two courses of revenge; firstly, he retreated into the reactions of his security cluster and secondly, he allowed the irrational conflation of race and the currency slide to prevail.

Read also: ANC must recall Zuma – anything else is “mockery of hard fought democracy”

The face of the former course of revenge is that of a blighted man, Hawks’ boss Berning Ntlemeza, whom a judge accused of lying under oath and so cannot be taken seriously. Beneath him exists a line of ANC officials who appear convinced that conspiracy is an authentic ideology – some of who do not consider legal infractions as impediments when it comes to the defense of their President.

The second course does not have a face, but a feeling, no better summarized than in a statement released recently (note the timing) by an ANC official: “In 24 years,” the statement reads, “I have never witnessed anything more racist than the market reaction to Desmond van Rooyen.”

I suspect it would horrify the author to discover who these market people supposedly orchestrating racist currency abuse really are, as any detailed City census would reveal a vast number of peripatetic African and Asian brokers and executives. The same could be said of any industry capital. Silicon Valley springs to mind. But context demands another view; 9/12 occurred in the same year that witnessed outrage at the legacy of colonialism through the Rhodes Must Fall movement and its media supporters. Following the conclusion of Gordhan’s US leg, I sent the statement to an American recruiter based in Mayfair who has spent 20 years placing candidates into City institutions.

‘History and identity,’ he replied, ‘are not in the City’s DNA. What applies to Turkey applies to Australia. Its nothing personal.’

‘Its nothing personal.’ When managers departed Gordhan’s briefings, one got a sense that it was, that these people weren’t present to listen to assurances but rather to deliver a warning they expected the team to carry back home. As custodians of over half of a R600bn investment sum, the City’s objective is not to assist Gordhan to avert a ratings downgrade, but to protect its interests – if necessary – using all the cruelty it is notorious for. Zuma, emboldened by strategic perversions of history and identity, is still fancying himself as an unmovable object against the City’s unstoppable forces of cause and effect.

So on Monday when Gordhan stated at the press conference in Johannesburg that ‘the country was being watched carefully’, perhaps what he really meant was: ‘I convey a message, in particular to the ANC’s National Executive Committee ahead of its meeting this weekend. The world’s financial capitals are not convinced the real issues behind December have been confronted, and thus the City is expecting another attempt to subvert the Treasury – or the equivalent. When this happens, they wish to assure you, the response will be executed with a clarity of intent designed to leave South Africa lying unconscious at the doorstep of the IMF.