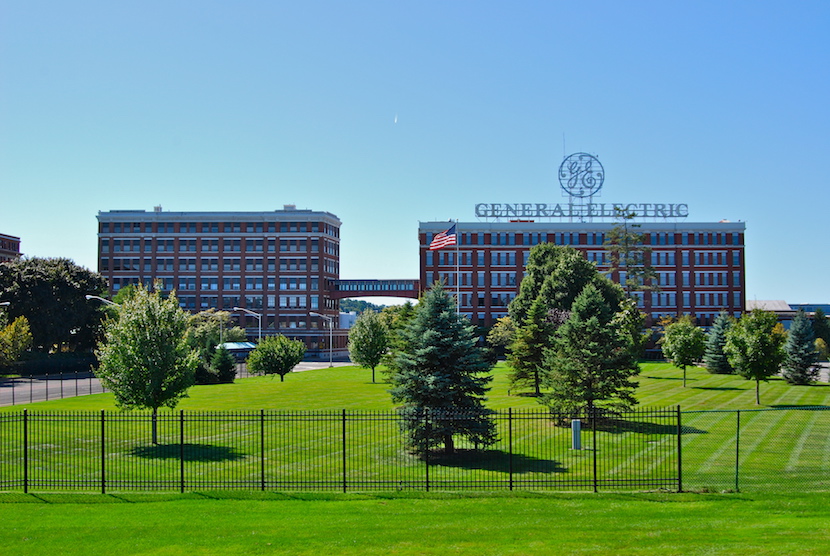 In the a previous article, we looked at Steve Jobs as a ROAM exemplar. This is a follow up about Jack Welch who made GE the most valuable company in the world during his tenure. Was he a ROAM exemplar too?

In 2002 I was in my car one evening listening to Moneyweb when someone phoned in to ask David Shapiro what he thought of the ROAM model as an investment tool. The caller had read Who Moved My Share Price? – a book just published that I co-authored with Professor Andy Andrews.

Shapiro said ROAM doesn’t really help when it comes to the timing of buying and selling shares. From a trading point-of-view he’s right as you’ll see now. From a share-holder view it’s another matter.

A few years after the Dotcom bubble burst, the banking collapse followed. Soon after, the Deloitte’s Center for the Edge published the Shift Index. It is a masterly study of shifting trends that came out of its analysis of more than 20 000 US firms’ performance since 1965.

One of their main findings is that Return on Assets (ROA) is the most effective financial measure of a company’s performance and management’s competence.

The chart below, adapted from the Deloitte study and an Economic Policy Institute Brief, shows a 47-year downward trend in ROA and a sharply rising one with CEO pay. It reached almost 400:1 in Jack Welch’s time and he was right up there. 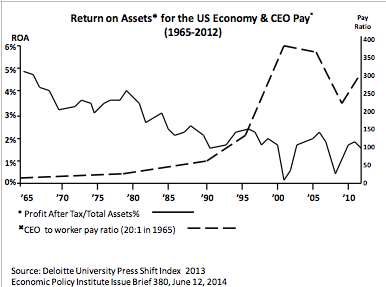 Moreover, MBAs graduating in the US went from 3200 in the mid 1950s to more than 200 000 today. Worldwide, hundreds of thousands more qualify every year.

What does this tell us?

Clearly, the link between CEO pay, management education and asset productivity is shaky. Many might see this as a problem. In fact, it’s a huge opportunity for personal growth and change for the better in all firms.

Deloitte, like most people, calculates ROAM as profit on assets as a percent. That’s only half the story. The other half is the sales productivity of the asset base (this is Sales ÷ Assets termed Asset Turnover or ATO). It fundamentally drives the value-of-the-firm, not a short-term focus on drivers of the share price.

The sales productivity of the asset base arises from a focus on customers and exploiting the opportunities that will make their lives better. It is of equal, if not greater importance than the profitability of sales – the other half of the ROAM equation. This is Operating Profit as a % of Sales termed Return on Sales or ROS. 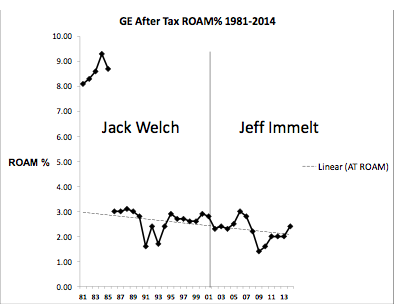 For his first five years, Jack Welch’s focus was to cut costs, not grow. After tax ROAM reached 9%.  He was nicknamed Neutron Jack for wiping out hundreds of thousands of people and leaving empty buildings intact.

In 1986 he diversified and turned GE into a bank. Huge growth followed. He bought 1700 companies and took the asset base from $21 billion to $437 billion with an average Return on Sales of 20%. That’s no mean feat.

But what about asset productivity? You can see the downward trend that started under his watch.

This chart shows the ATO effect by segment and group as a whole. 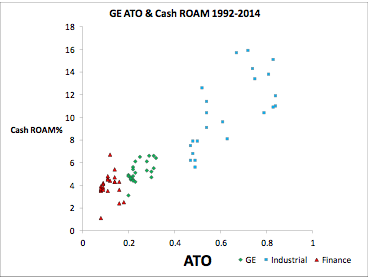 The message is clear – the lower the sales productivity of the asset base, the lower the ROAM. Here I use Cash ROAM, not accounting profit. This is based on Cash Operating Profit after adjustments for depreciation, amortisation and working capital – a true measure of competence.

What else does that chart tell us?

Even with a high ROS%, and Jack delivered that, ATO has a big impact. There’s an even bigger one. A low ATO can have a huge effect on economic profit (the profit left after paying the cost-of-capital), or as Peter Drucker put it, on value destruction.

Given past performance, if you apply a reasonable 20% charge for shareholder equity to GE Industrial and GE Finance over the same period, this is the picture. 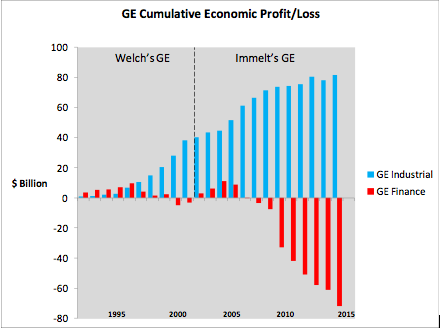 Does this chart show that Welch’s strategy started going wrong at the height of his fame? During the last four years of his reign, GE Finance made an economic loss of almost $15 billion.

Apart from an uptick under Immelt, the loss presaged a cumulative decline to where it is today – a $72 billion economic loss for GE Finance but the opposite for 20% of the asset base – GE Industrial. The picture for the group as a whole with full consolidation of numbers is not pretty at all.

Does that explain Jeff Immelt’s decision to get out of banking to focus on the ‘old’ GE so to speak?

Next, look at After Tax Cash ROAM since 1992 compared to the ratio between the Value-of-the-Firm (VOF) and Equity. 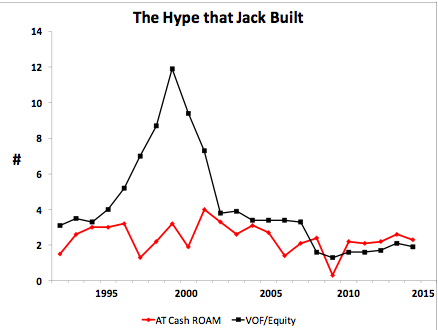 GE was seen as the most valuable company in the world in 1999 and Welch as manager of the century by media and academics.

Isn’t ROAM, especially Cash ROAM, a better lens to use to get a realistic view?

What could happen in firms if managers at all levels became aware of its significance and how to use it to pinpoint and then maximise opportunity?