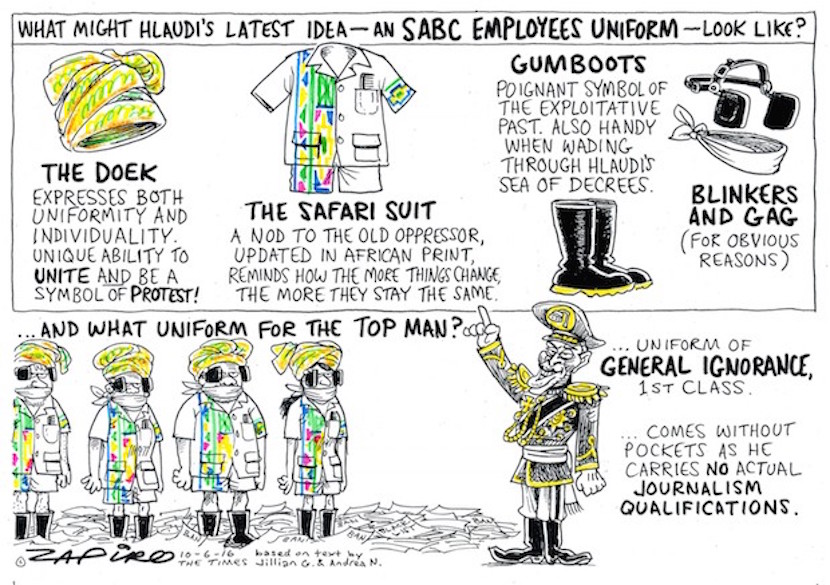 The SABC crisis swings in roundabouts, even more so following the ANC’s comment that the state-owned broadcaster is not abiding by the constitution by ignoring ‘the news’. And while there all legitimate calls for current COO Hlaudi Motsoeneng’s head, how effective is a change going to be if it’s just another puppet who replaces him? The Institute of Race Relations’ Phumlani Majozi says the solution is clear as daylight, just privatise the corporation. But given Eskom’s recent regressive talk into a developmental state, as it talks about taking back assets it owns at coal mines, this is likely to fall on deaf ears, and won’t even get in the door. Majozi extends his privatisation solution to airlines and electricity, saying government’s role is to govern not own. Which may be music to South African’s ears after yesterday’s investigation into another one of President Jacob Zuma’s puppets, SAA chair Dudu Myeni’s R256m rent extraction plan. One has to ask: will it ever end? – Stuart Lowman

Under his management all SABC radio stations have been ordered to play 90% local music and 10% foreign. He didn’t end there, he then banned the broadcasting of violent protests and the reading of newspaper headlines on air. Any staff member who disagrees with his decisions is marginalized or fired. Frightening, right?

The affected, journalists and other stuff members within the SABC, have had enough. Their ire over Hlaudi’s dictatorial managerial actions has reached its zenith. Some are now calling for mass action against Mr. Motsoeneng.

It’s not only those within the SABC who have been enraged by Hlaudi’s SABC censorship, also the general public at large. The public broadcaster will now face a court challenge by a lobby group on its censorship.

As I read about and watched this SABC disorder on various news outlets, only one thing came into my mind; and that is, the source of this mayhem is government. Yes, it is government. This is a government-owned company. As a result, people who run it do not care how the general public views it – the company is exempted from competing with other broadcasting organizations. They, the management, have nothing to lose.

When turmoil erupts in parastatals, left-wing fanatics tend to insist that the solution is to change the management – which has been done many times across government-run companies – and still, scandals and waste of taxpayers’ money never end.

We are picketing outside ICASA to urge them to scrap SABC illegal editorial policy say no to #SABCcensorship pic.twitter.com/lAiEg1MXGE

As Hlaudi persists on strangling the SABC, I hope South Africans will now realize that any government’s involvement in business not only consumes taxpayers’ money, but also produces thugs and tyrants like this man – who have managed to be at the helm of the organization because of political affiliation not merit. These tyrants have nothing to lose. To them consumers don’t matter. The term consumer is not in their vocabulary.

Perhaps understandably so, why should they care about what the consumer wants when they are guaranteed that no matter how tainted their company is government will come to rescue? I doubt I’d also care.

If we are really serious about this country then we need to be bold and proactive. And the only way to be bold and proactive about the SABC is to get government out of the broadcasting industry. No we don’t have to change the management, we have to privatize it. Because if it’s run by government; it’s run by politicians whose mission is to advance political motives, not to provide a decent service. They don’t pay a cent for their scandals.

If the private sector were to take over the SABC, significant changes would take place, fast. Because it would be under pressure to keep up with competition in the broadcasting industry. If it were run for profit, all these political scandals and dictatorial conducts would end. In a competitive market you misbehave you lose.

No shareholder would want to own a nest of political squabbles – given competition from other broadcasting companies. This Hlaudi would have been booted out long time ago. In fact he would have never even thought of censoring the SABC. That’s the beauty of a competitive market – it maintains order and discipline.

We South Africans have come a long way. During the apartheid rule, the SABC was white government’s propaganda machine. Well, that propaganda machine is still with us, although now with a different motive. And it’s not going away as long as the SABC is under the wings of politicians.

The solution is clear – government should exit the broadcasting industry. Government’s role is not to own broadcasting businesses, or airlines, or electricity companies; the role of government is to govern. It’s crucial that we people of South Africa understand this. Because if we do not, propagandists and charlatans will forever take advantage of us. They did take advantage of us during apartheid. Let’s not allow them to continue.