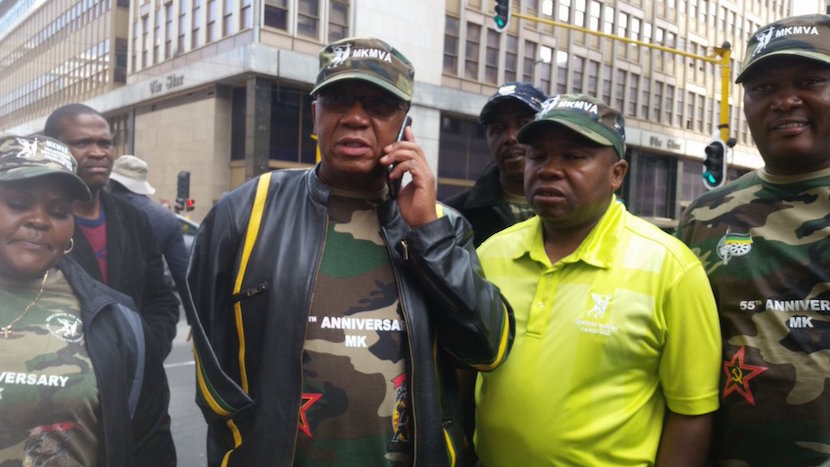 The armed wing of the ruling African National Congress was co-founded by Nelson Mandela in the wake of the Sharpeville massacre in 1961. Its primary mission was to fight the South African government, and the means were summed up by Mandela’s famous ‘I’m prepared to die’ speech. There’s a long history of violence and the organisation was integrated into the South African defence force in 1994. The events in KwaZulu Natal in the early 90’s however highlighted a shift in focus, and it’s this history that must concern South Africans following the ‘watered down’ #OccupyLuthuliHouse protest. The veterans were deployed, and as Anthea Jeffery says: “If this trend continues, the country could reap a yet more bitter harvest from its persistent blindness to the people’s war”. And one only has to look north of the border to get a glimpse of how government uses such a force. Will the ANC ever be able to make the move from a liberation party to an economic one? – Stuart Lowman

On Monday 5th September hundreds of “veterans” of the ANC’s people’s war gathered outside Luthuli House to intimidate and attack around 80 protesters demanding the recall of President Jacob Zuma, the resignation of the ANC’s national executive committee (NEC), and the holding of a consultative conference before the end of 2016. The protesters blame Mr Zuma and the NEC for the ruling party’s poor performance in the recent local government elections.

The protesters’ original aim was to ‘occupy Luthuli House’, the ANC’s national headquarters in Johannesburg, in support of their demands. But in the face of what a report in The Times describes as ‘sustained intimidation and late-night appeals from party bosses’, the organisers agreed to scale down their demonstration.

They said they had called on their supporters not to come because ‘self-proclaimed defenders’ of Luthuli House would work, with ‘the aid of state machinery’, to cause disruptions. “If we had come with more numbers, it would have been bloody; it would have been very ugly,” said Ronald Lamola, a former deputy president of the ANC Youth League. Instead, the protesters said they would submit their memorandum at the ANC’s regional office in Gandhi Square.

When the day of the protest came, Luthuli House was nevertheless turned into a fortress. It was surrounded by armed response vehicles, a large riot police contingent backed by metro police – and hundreds of members of the Umkhonto we Sizwe Military Veterans’ Association.

Some of the veterans openly carried firearms. Others were armed with sticks. Many were aggressive towards both the protesters and the journalists trying to cover the scene. Reports The Times: ‘Armed “veterans” repeatedly clashed with the media, forcibly removing journalists from pavements outside Luthuli House and preventing photographers and video cameramen from taking pictures.

If you want to know why SA is in a mess, look at what's happening outside #LuthuliHouse. Those are your rulers #OccupyLuthuliHouse

“You must voetsek. You people are scum, filth. F***cking pigs, who must die. If you do this [recording], you will be sorry,” several veterans screamed at journalists. Foreign journalists were pushed away from Luthuli House and told they were not welcome in South Africa. “You are imperialists. F***k off back to your lands. You will leave here in coffins.”

The police made no attempt to intervene or to disarm the veterans. Gauteng police spokesman Colonel Lungelo Dlamini said the police were unaware of weapons being brandished by veterans. However, as The Times reports, these weapons ‘would have been evident to anyone at the scene’.

Writes journalist Stephen Grootes: ‘Once Umkhonto entered the fray, violence was always inevitable… These are people who wear uniforms, perform exercises in front of crowds, and supposedly “provide security”. With no legal authority to do so. And yet, for reasons unknown, the police seem happy to let them do it…. But the real villain here is the ANC itself. It has never held these people accountable. It allows them to behave like an uncontrolled and unpredictable mob. The people who do this, while wearing ANC uniforms, are never named, shamed, or expelled… [They] have been doing it for several years [and] they are not going to stop now. They see themselves almost as a private army.’

From 1990 to 1994, when some 15 000 people died in the last four years of the ANC’s people’s war, political violence was primarily directed not at the National Party government – which had already committed itself to non-racial democracy – but rather at the ANC’s black rivals in the Inkatha Freedom Party (IFP) and the Black Consciousness (BC) movement.

A soldier without any political or ideological training is a potential criminal.- Thomas Sankara #OccupyLuthuliHouse

The BC movement was quickly neutralised, but the IFP fought back – sometimes viciously. It nevertheless suffered the bulk of the fatalities because it could not match the military training and sophisticated weapons of the 13 000 or Umkhonto insurgents who had returned to South Africa by early in 1991. The NP government had expected the ANC to disarm its Umkhonto cadres as part of the peace process, but this the organisation refused to do.

The upshot, as the police later told the Goldstone commission in KwaZulu/Natal, was that the ANC was able to ‘wage an aggressive war on its political opponents by military means’. By contrast, ‘the IFP was disadvantaged in its resistance to the ANC’s onslaught’ because it lacked ‘the quantity and sophistication of the weaponry available to the ANC’.

By the time of the April 1994 election, the IFP had been greatly weakened by the killing of hundreds of its leaders and thousands of its supporters. Despite Umkhonto’s likely role in these deaths, the ANC’s brilliant propaganda campaign had also saddled the IFP with the blame for the surging violence of the early 1990s. This fatally undermined Inkatha’s legitimacy, helping to cement the ANC’s hegemony.

I'm trying to think how old this "MK vet" was 23yrs ago. I mean the gent in camouflage #OccupyLuthuliHouse pic.twitter.com/35GkWovq2I

Hence, once the 1994 election had set the seal on the ANC’s victory, the violence quickly tapered off. For 22 years, the ANC’s political dominance then remained in place – albeit with diminishing electoral majorities in recent years.

However, in the wake of the August local government elections, the ANC has reason to fear that its hold on power is slipping. A dominant faction within it now also faces demands for its demise. In these circumstances, the temptation to use violence for political gain is likely to grow: and especially so if the police continue to turn a blind eye to coercion from Umkhonto’s supposed veterans – many of whom are too young to have participated in the people’s war but are nevertheless claiming the mantle of MK’s supposedly noble deeds at that time.

Already, protesters cannot gather on the streets of Johannesburg without intimidation and the risk of attack by Umkhonto war vets. If this trend continues, the country could reap a yet more bitter harvest from its persistent blindness to the people’s war – and to the part then played by Umkhonto in weakening the ANC’s political rivals.