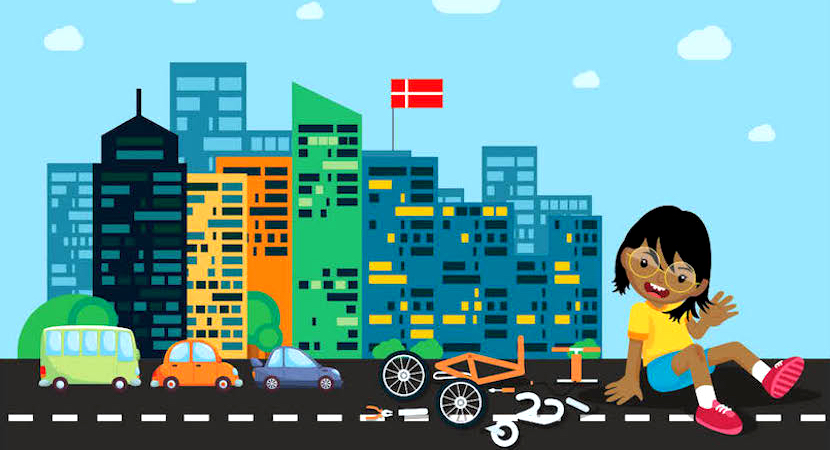 In the great cycle of life, there are so many things you can set out to achieve, if you’re only prepared to try, try, and try again. But sometimes, knowing when to give up is just as important. Especially if you keep riding into rivers while you’re trying.

Years ago, I was at a Management Strategy Weekend away, and a truck rolled up with a whole bunch of bikes for a team bonding exercise.

‘Um,’ I can’t really ride a bike,’ I said. Everyone looked at me as if I had just admitted to not actually being able to read.

‘Oh good!’ said our trail-biking manager. ‘Imagine? Someone who can’t ride a bike!’

‘Ha, imagine,’ I said with a nervious laugh. ‘How pathetic?’

Obviously, it took me exactly 15 minutes before I fell spectacularly down a hill. Clearly, I did not have the relevant attributes my new boss felt are needed in a manager.

Well. Sucks to him.

I actually really like biking. It’s a beautiful way to be outdoors, to explore forests and cities, byways while avoiding highways, and a super opportunity to have not only a basket but a great, big, shiny bell.

Bicycles are such happy, wholesome things. I try to cycle whenever I get up the nerve.

I have to get up the nerve because, despite being nearly 45, I’ve never actually mastered the whole cycling bit of biking, which – it could be argued – is really the central tenet of the discipline.

I’ve tried. I’ve really tried. The first time I fell off my bike was when I was learning to ride. As one does. But then, unlike absolutely everyone else I know…I didn’t stop falling off.

I fell off my Clipper as a 9-year-old and scrapped the skin off my shins. I fell off my brand new BMX on Christmas Day at 13, and couldn’t bend my knee for weeks.

I’ve also ridden bikes into rivers in more than one country – the Colorado River in Austin, Texas and the Serpentine in Hyde Park, London.

(Note to people in parks and on river trails: no one is ever going to ‘do it again’ so you can get it on YouTube.)

Then some time last year, I found myself as part of a group exploring the incredible bridges of Copenhagen by bike, In fact I went ‘Viking biking’. That’s what it is called in Denmark when you bike about in the rain.

Read also: Sam Wilson-Späth: Why I married a German, for better or wurst

Obviously a bit nervous. My friend however, was incredulous.

‘You’re KIDDING,’ she said. ‘It’s raining. You’re a terrible, terrible cyclist. Go sit in a cafe until we’re done. Or have a walk.’

‘But what a great thing to do!’ I protested. ‘Cycle about this incredible city? Cross the Nyhavn canal on a red bike, wearing a nifty raincoat in bracing weather? There’s a drought in my home town! I’m not missing this.’

About an hour later, I was sitting all sore and bruised between a bollard and a broken bicycle, wetly causing all sorts of traffic mayhem. Did you know there are an average of 2.4 bicycles per person in Copenhagen? I did not. The city is just one big whizzing swarm of cyclists and the odd nervous motorist.

And it was at this point that I made an important life decision. I am going to stop trying to ride bikes. I suck at it. And despite all efforts, ‘try, try and try again’ is just not cutting the mustard. I’m going to give up.

Read also: Sam Wilson-Späth: How not to get fired on your first day at work

Giving up gets such a bad rap. Especially if it’s something that many people can do. Like riding a bike. Or maths. Or playing an instrument. ‘You’re giving up?’ people say, with horror. ‘But you can’t give up! Go on. Success is 1% inspiration and 99%…’

Save the perspiration for something else, I say. Especially something that, in my case specifically, doesn’t involve periodic internal bleeding.

I’m going to Dublin in a month or so and I have resolved NOT to hire a bike to explore the gorgeous Irish countryside. I am not simply going to resign myself to foreign bruises and I am not going to meet the Liffy River shoulder first.

Me? I’m going to walk. I am ace at walking. I don’t freeze up when someone walks next to me, I don’t wobble when I turn corners and I very rarely take the skin off my shins.

And maybe, just maybe, it’s the way I am supposed to be exploring.