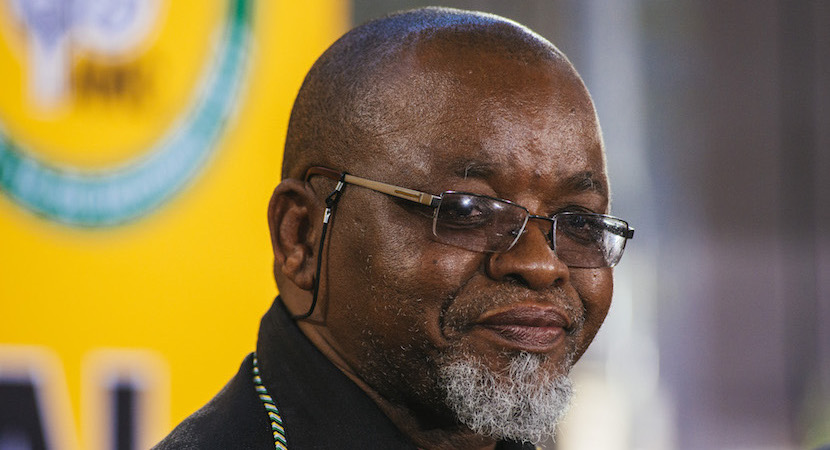 JOHANNESBURG — There’s been a lot of fuss over the new Mining Charter and what its contents will and won’t contain. So, it’s quite surprising that last week’s publishing of the Mining Charter by the Department of Mineral Resources appeared to be quite a low-key event. The industry has said it’s still studying the document – so we can probably expect more noise to emerge as the weeks progress. However, the Institute of Race Relations (IRR) has highlighted an important point: the Mining Charter is actually not legally enforceable. It’s more like a grand agreement among mining bosses and politicians. But ‘politicians’ is the key word here as the IRR points out that going against the Charter could leave a mining company left out in the cold… – Gareth van Zyl

South Africa’s minister of mineral resources, Gwede Mantashe, is no doubt pleased to have published a draft Mining Charter. He has often said it is needed to bring greater certainty to the mining investment environment in South Africa.

The problem is that it does nothing of the sort.

With all the attention on the various troubling details of the Mining Charter, something the Institute of Race Relations (IRR) has commented extensively on, it is all too easy to lose sight of the biggest detail of all – this document has no binding legal status.

As the Department of Mineral Resources has decided to withdraw the Minerals and Petroleum Resources Amendment (MPRDA) Bill, there is no legal basis for any sort of enforcement.

Section 100 (2) (a) of the original MPRDA required the minister to ‘develop a broad-based socio-economic empowerment Charter’ and to do so within six months. Fortuitously, there was such a Charter around at the time, the original 2004 document, an investor-friendly statement developed by the industry itself. Then minister Phumzile Mlambo-Ngcuka seized and published it to meet the requirement.

But the Charter was never intended to be an enforceable regulation.

Furthermore, the MPRDA makes no provision for the original Charter to be altered, varied or revised. This means that the second (2010) and third (2018) iterations are in fact ultra vires i.e. beyond the scope of the minister’s defined legal powers.

If the Charter is not legally binding, why has the industry gone to such lengths to implement it?

Part of the answer is, surely, inertia. It was the mining industry itself that initially set out on this path, setting the original 26% Black ownership standard, under, it must be pointed out, the continuing consequences principle. It was the industry itself which committed to transformation. It does not need to be coerced.

But coercion is the second and much larger factor in the industry’s compliance.

Quite simply, it is the minister’s vast powers – to grant and withdraw mining licences, to close mines for safety inspections and even, in terms of the 2011 Beneficiation Act, to require further processing before minerals are taken to market – which have intimidated the industry into obedience.

So, while there is no binding law or regulation which says that an applicant for an exploration licence should be 30% Black-owned, no sane would-be mining entrepreneur would bother to apply without such a structure in place. He or she would expect to be turned down.

An environment in which the critical standards of action are set out in what is effectively a party-political pamphlet and which is to be achieved through arbitrary administrative discretion can hardly be considered stable, consistent or transparent.

Nor should one place too much faith in Mantashe himself. He appears to be well regarded and some believe he is the most knowledgeable minister we have seen in the democratic era. Not that the likes of Pik Botha, Penuel Maduna, Susan Shabangu and Mosebenzi Zwane set that particular bar very high.

But the issue is not the character of the minister so much as the nature of the regulatory environment. What would a truly bad minister do under these circumstances? We don’t need to look very far to find out. The present minister’s egregious predecessor demonstrates how bad things could be.

So, for potential mining investors looking for a stable regulatory environment, nothing has changed. The argument that even a flawed Mining Charter is better than nothing because at least mining companies will know where they stand and what they have to do is nonsense so long as the most basic thing about the Charter – its legal status – remains fudged.

Mantashe has been praised for withdrawing the MPRDA Amendment Bill. It is a pity he hasn’t seen fit to extend the same logic to the Mining Charter.