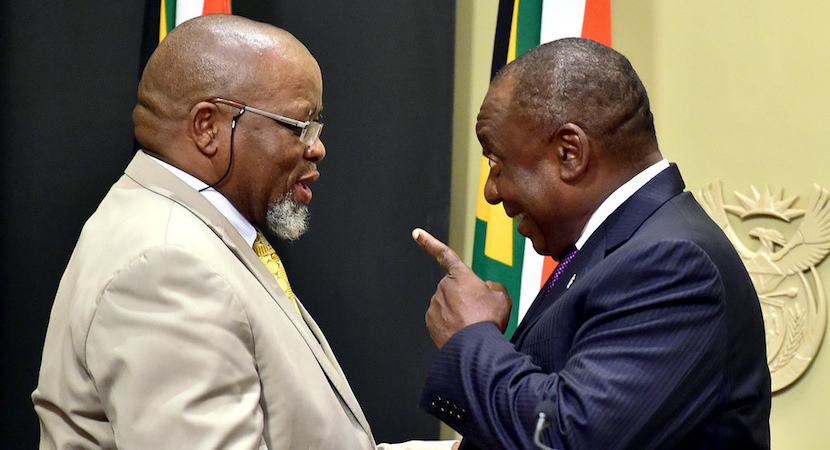 CAPE TOWN — Taking things from whence they come in this case unusually adds major impact to the message of Solidarity’s General Secretary Gideon du Plessis. That’s because he’s singing the praises of our new Mineral Resources Minister, Gwede Mantashe and his boss, a fellow former leader of NUM, President Cyril Ramaphosa. So much so that he reckons the mining sector and the former NUM pair are made for each other. Which must surely bode well for the economy after Mantashe’s predecessor, like so many strategically positioned former Zuptoids in the last decade, almost single-handedly brought the industry to its knees. When a long-standing acknowledged union like Solidarity comes to the party in a strategic attempt to save thousands of jobs of its members, there’s good reason for hope. Here Du Plessis reveals Mantashe’s modus-operandi and motivation in a reassuring description of a man with a vision far less selfish than his predecessor Mosebenzi Zwane. Read on and see why all is not doom and gloom. Not by a long chalk, if Du Plessis is on the money. – Chris Bateman

New Mineral Resources Minister, Samson Gwede Mantashe, also known as SG, subscribes to a particular ideological framework of thought, makes his own rules and does things in a way that may not be to everyone’s liking. Be that as it may, his appointment came just in time to save the mining sector from collapse. His recent intervention to withdraw the controversial Minerals and Petroleum Resources Development Amendment Bill was one of many strategic interventions to get mining back on track again.

Many factors count in Mantashe’s favour, but the fact that both he and President Cyril Ramaphosa are former leaders of the National Union of Mineworkers means that he and the head he reports to understand mining and one another. Together with this, his negotiating and mediating skills, and first-hand knowledge of the Minerals Council, mining trade unions (he has done his Master’s degree on mining trade unions) and mining communities, make him the ideal appointment.

At a recent meeting of the Minerals and Petroleum Board, Mantashe indicated that he was in his element and that he was enjoying his work as he loved mining. He also expressed the hope that the “Buffalo,” as he jokingly refers to Ramaphosa, would keep him in the job after next year’s election. He added that, given the sector’s high profile and its impact on people’s lives, he was committed to putting mining at the top of the cabinet agenda.

However, Mantashe first had to undo the mess his predecessor Mosebenzi Zwane’s left, by restoring the credibility of the Mining Charter consultation process in the first place. Unlike Zwane, he met with every board and committee that forms part of his portfolio, setting goals and challenges for each to increase their relevance. He also gave boards a piece of his mind about their annual reports, strategy documents and action plans that were merely updates of the previous year’s version – he wants to see new thinking on an ongoing basis. Moreover, if no reference is made to a strategy document in discussions with him, then it means that that document is merely a paper exercise.

By being rather indignant about their appointments Mantashe has openly humiliated a number of board chairpersons and executives who lack the appropriate background and who have been appointed during Zwane’s term of office. Heads are therefore set to roll. Following a loss of institutional knowledge that ensued from Zwane’s path of destruction, Mantashe has immediately surrounded himself with former senior officials as his advisors.

Given his loathing for public service red tape which meant that correspondence only reached him weeks later, he introduced an arrangement in terms of which his advisors may be contacted should an industry player need to discuss an urgent matter with him. On the other hand, Mantashe refuses to sign any document or letter if he has not first familiarised himself with its content and background.

Moreover, Mantashe is not in favour of the large contingent of legal advisors being employed by the Department of Mineral Resources, his argument being that that explains why the department tends to embark on so much litigation. He prefers to have a team that would rather negotiate with mining houses when disputes arise, thus trying to find a way to work together. In this vein, he explained to officials that the mining houses are their clients, not their opponents. Where there has been any proof or suspicion of corruption, especially with regard to the issuing of mining licences, regional offices have been closed.

He is also making an effort to restore relations with the Minerals Council. For example, on his way back after the ANC’s recent lekgotla, he first stopped at the council’s offices to inform them about the resolutions adopted at the lekgotla. In response to the burning issues such as rising electricity tariffs raised by the Council he undertook to discuss it with his cabinet colleagues and to find solutions for it – as ANC chair and senior leader within the ANC’s top six he has the necessary clout among the other ministers.

By the way in which he has expressed his dismay after Impala Platinum and Gold Fields recently announced massive layoffs, Mantashe has shown himself to be a comrade of the trade unions and mineworkers, and his high level political support has now become part of trade unions’ power building arsenal.

Mantashe always tells players in the mining sector to use positive language when referring to the sector. After Solidarity had contended in a press release on Impala’s proposed retrenchments that a hostile and uncertain mining environment was partially to be blamed for the retrenchment bloodbath, the minister’s senior advisor demanded an explanation.

Even though Mantashe is a hard task master and his style might be robust, he is leading from the front, passionate, competent, effective, and is undoubtedly the right person for the job. The Buffalo should know it.